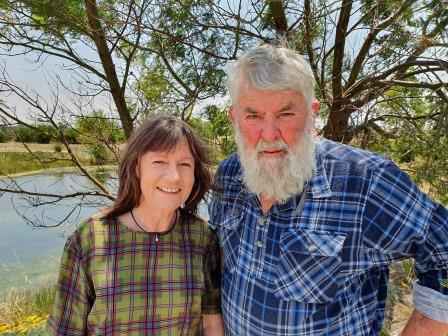 Frankie and Graeme MacLennan recall the early days of Landcare history and discuss where Landcare is today and the next phase for Landcare, making this interview an important account.

Frankie and Graeme grew up in the country – Frankie in the Wimmera region where her family had a market garden business and Graeme in Gippsland, who followed in the footsteps of his farming parents; his father having developed a shared property within the Soldier Settlement Scheme.

Frankie’s studies saw her qualify as a teacher and Graeme graduated from Longerenong Agricultural College. Their keen sense of the land, conservation and their community, along with a ‘will do’ attitude, saw them undertake a range of restoration projects on their property while also participating in many local, regional and State conservation activities, committees, programs and projects.

Graeme was already fencing off remnant vegetation and planting trees on his mainly cleared farm when they met and both he and Frankie talk of early influential moments that supported their joint thinking and their Landcare journey. A presentation from the VFF and others at a Phillip Island Forum, participating in the Master Tree Grower Course, attending State and National Landcare Conferences, networking and visiting other Group and farm projects amongst the highlights.

Environmental pursuits became a new career for Frankie and initially she worked with the then Victorian Conservation Trust (Trust for Nature) then had an eight-year role with the Government’s Land for Wildlife followed by being with the Farm Smart Project.

Graeme along with Fergus Irving developed a tree seeding machine which is proudly part of the districts tree coverage history as seen in today’s local landscape. A ‘value added business’ for quality wool products is a fascinating part of the MacLennan partnership and their financial farming survival in the wool price downturn of the ‘90’s.