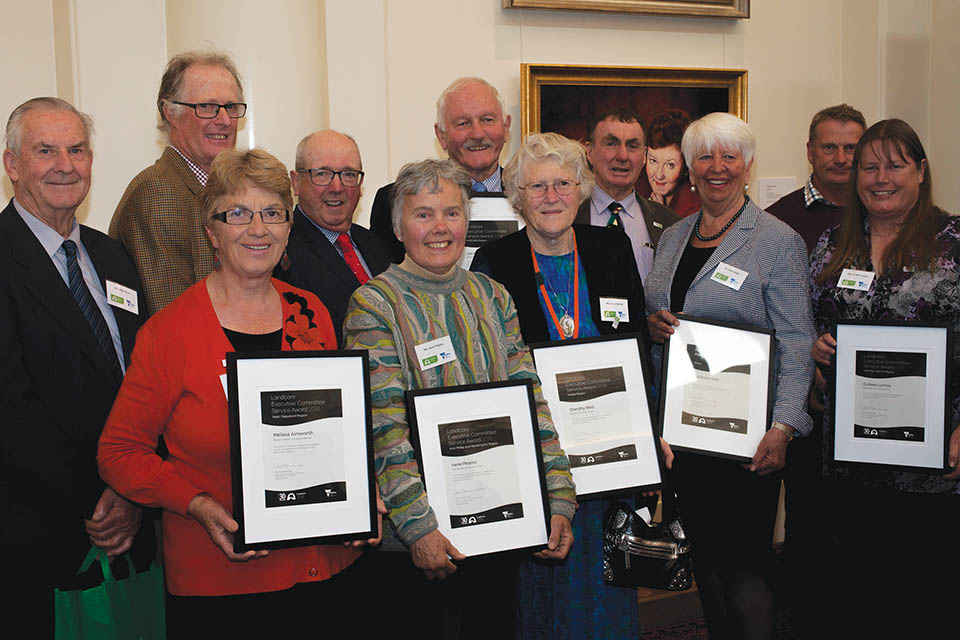 More than 200 people attended the event in the beautifully appointed Queen’s Hall. Most of the attendees were community members who had been involved in Landcare since its early days.

In 1986 Joan Kirner, then Minister for Conservation, Forests and Lands, and Heather Mitchell, then President of the Victorian Farmers Federation, came together to tackle land degradation in Victoria. The partnership they developed between the State Government and Victoria’s farming community produced Landcare. Joan Kirner officially launched Landcare at Terry Simpson’s property at Winjallok, near St Arnaud on 25 November 1986.

In Heather Mitchell, Joan Kirner had found a like-minded partner and ally. Both Joan and Heather understood that community and landholder participation would be key to the success of Landcare. They could also see that when the community worked together to tackle local problems much wider social and environmental benefits were produced.

In its first year seven Landcare groups were formed. In 2016 Victoria has almost 600 Landcare groups that cover 68 per cent of privately owned land. Landcare projects can be found in more than 20 countries around the world

The anniversary celebration at Parliament House recognised the achievements of Landcare in Victoria over the past 30 years, and acknowledged the contribution of community Landcarers to the movement since its inception.

The Parliamentary Secretary for Energy, Environment and Climate Change, Anthony Carbines MP, presented the prestigious 2016 Joan Kirner Landcare Award to Alice Knight OAM. Alice was recognised for her outstanding contribution to Landcare and the catchments and communities she has served.

Alice, along with her brother Kevin, are fourth generation farmers from Pittong, west of Ballarat. Alice’s involvement in Landcare began in 1988 as a founding member of the Pittong-Hoyles Creek Landcare Group. In the 1990s she joined the Woady Yaloak Catchment Group’s committee where she served as chairperson for five years.

Alice’s passion and commitment to Landcare and the Woady Yaloak Catchment Group are legendary. She understands the importance of community participation and the need to involve private landholders in protecting, restoring and enhancing their natural resources to improve both productivity and the environment.

Alice was surprised and honoured to win the award.

“I was very touched. To receive the award in a room full of Landcarers who have made significant contributions, many of them friends, made it even more meaningful.”

Anthony Carbines also presented Landcare Executive Committee Service Awards to 10 community Landcarers. These awards recognise a person from each of the CMA regions who has demonstrated an outstanding commitment to their Landcare group or network through an executive committee role.

The list of those on the 30 Years of Landcare in Victoria Honour Roll was also on display at Queen’s Hall.

For details about the 30 Years of Landcare award winners and the Honour Roll go to this page on the Gateway.

Read next article: Five crowdfunding tips from the southern Otways