The 2021 Victorian Landcare awards were celebrated on Friday 26 November 2021 in an online ceremony.

Over 200 people watched the ceremony across the state, where sixteen awards were presented to individuals and groups for their dedication to caring for the environment.

The event also marked the 35th anniversary of Landcare in Victoria. 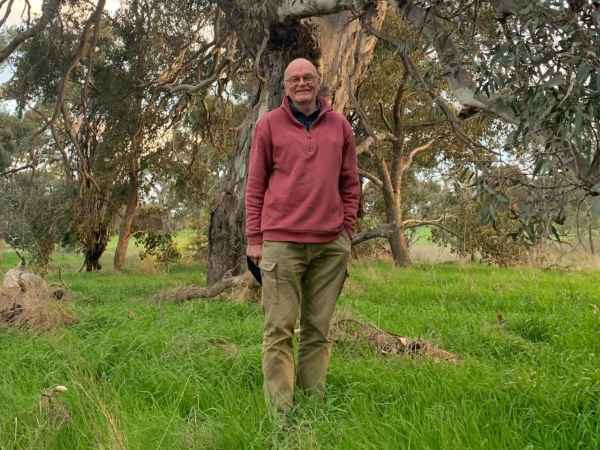 This award acknowledges the significant contribution made by an individual who has demonstrated outstanding leadership and commitment to Landcare.

Don Rowe is a landholder and leading Landcarer in the Upper Hopkins region.

He has guided the strategic direction of the Upper Hopkins Land Management Group since it formed in 1991.

Don showcases Landcare farming at its best, by incorporating sustainable production and ecological benefits on his property.

He and his wife Goldie have created a network of biodiversity corridors across their land.

Don will represent Victoria at the 2022 National Landcare Awards 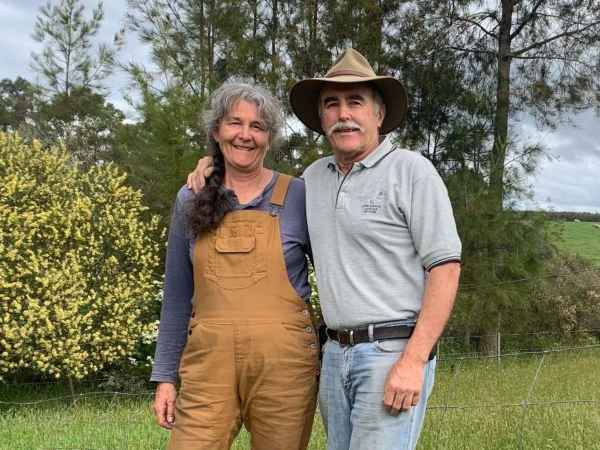 Andrew and Jill Stewart and family manage a 230-hectare regenerative grazing and agroforestry property on the edge of the Otway Ranges.

They have established more than 50,000 trees and shrubs on the property while maintaining high agricultural productivity. 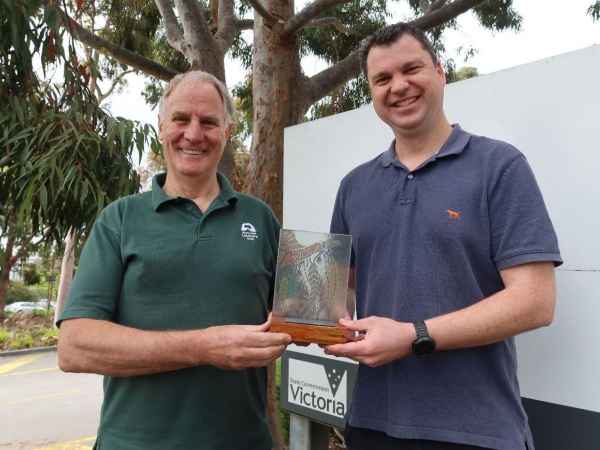 This award acknowledges the leadership and achievement of a partnership between individuals, groups, networks, or organisations.

Northern Yarra Landcare Network and VicRoads worked together to achieve the treatment of 190 sites of invasive weeds along 14 kilometres of Melba Highway roadside in the Yarra Valley, to mitigate the ongoing threat to private properties and waterways.

The sites ranged from small outbreaks to large infestations of up to 1,000 square metres. 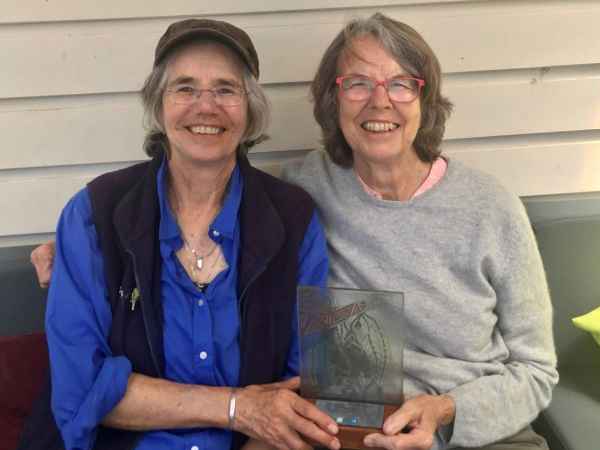 This award acknowledges a community group or network that has contributed to the significant improvement of a coastal or marine environment.

These two groups are protecting and improving habitat along Victoria’s unique and precious Bass Coast. 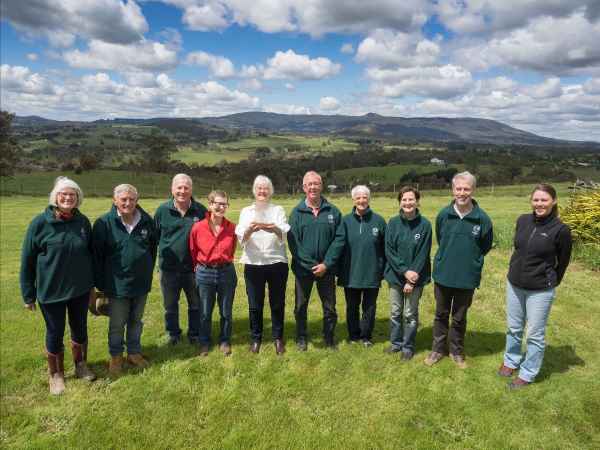 This award acknowledges an outstanding community group that is improving sustainable land use and/or is undertaking on-ground action to protect, enhance or restore the natural values of an area on behalf of the community.

Newham and District Landcare Group has achieved significant environmental outcomes, with a focus on waterway health and protection of remnant vegetation.

The group’s main project has been the Cobaw Biolink which connects habitat for native species on both public and private land between Mount Macedon and Cobaw State Forest.

Newham and District Landcare Group will represent Victoria at the 2022 National Landcare Awards. 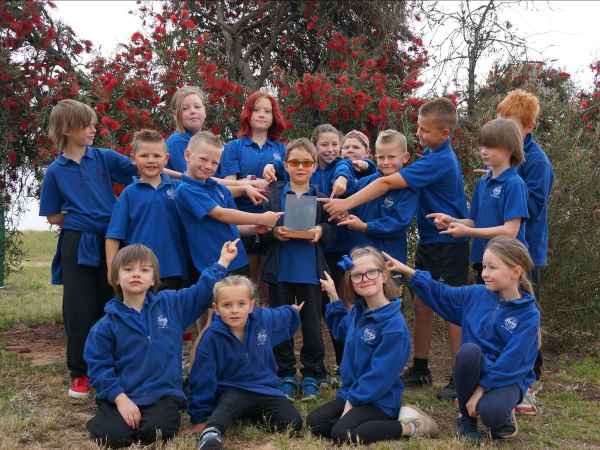 Students at Tempy Primary School in far north Victoria have become inspiring environmental leaders and Malleefowl ambassadors following a student-driven project about the importance of conservation and sustainability.

The 18 students at the small rural school actively monitor Malleefowl nests in local parks, lobby for more pest animal control and better signage for roadsides, and share their findings with their community. 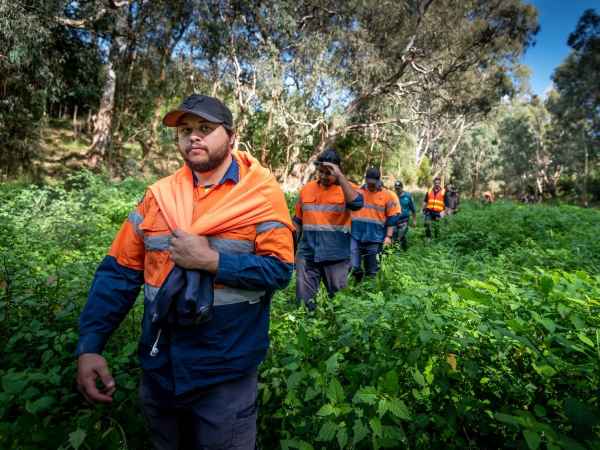 This award acknowledges an outstanding Indigenous community group or individual who is working towards improving land use or protecting an area on behalf of the community.

Wurundjeri Woi Wurrung Cultural Heritage Aboriginal Corporation’s Narrap Team have had a huge impact on natural resource management on Wurundjeri Country within the Port Phillip and Western Port region as they bring Indigenous land management practices back into use. 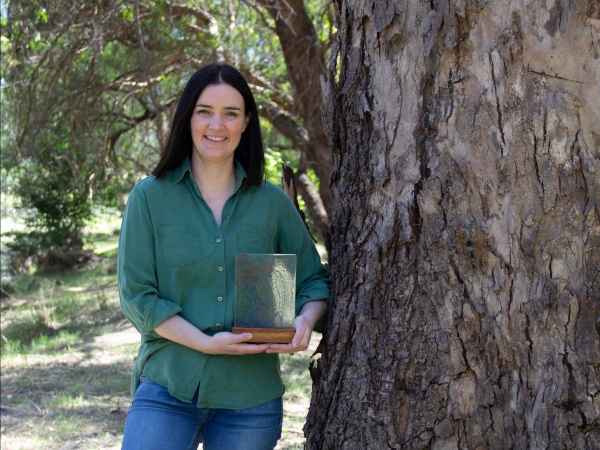 This award acknowledges an individual or youth group between 15–35 years who promotes excellence in Landcare through on-ground projects and awareness raising activities.

She has supported over 160 Landcare groups and networks for five years.

She is driven to support volunteers, spread the Landcare story and engage new audiences.

Tess will represent Victoria at the 2022 National Landcare Awards. 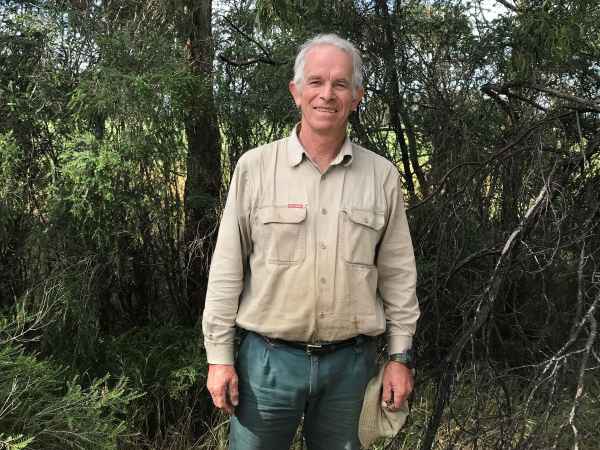 This award is for an individual who has championed the Landcare movement, contributed to Landcare for at least 10 years, and demonstrated commitment to forging partnerships and effectively engaging the community in Landcare.

As President of Kowree Farm Tree Group and Chairman of the Environmental Farmers Network, he has advocated for the incorporation of conservation into agricultural practice for over 30 years.

Andrew has supported research, encouraged beneficial partnerships to bring funding to local projects, and advocated for the region to be incorporated into wider conservation plans.

Andrew has demonstrated dedication to his community and the environment by hosting field days on his property, mentoring new groups, and sourcing funding for community planting days. 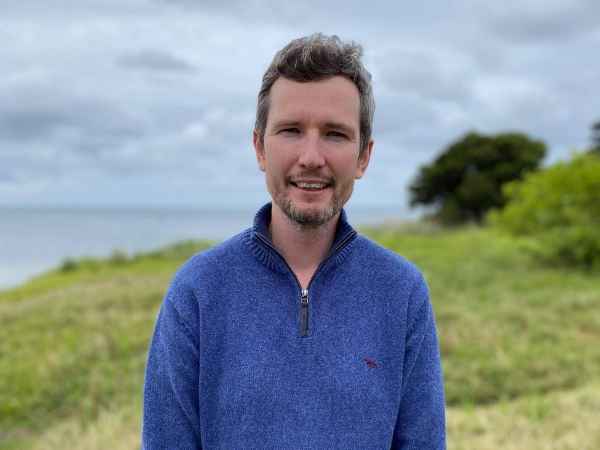 This award is for an outstanding community Landcarer or Landcare support staff for the purpose of study, travel, or professional development.

Scott Elliott is a second-generation Landcarer and an aquaculture operator.

He is a leader in the Corner Inlet Broadleaf Seagrass Restoration Project, which addresses the decline in seagrass that is impacting local fish populations.

The project is a partnership between Landcare, commercial fishers, members of the academic community and dairy farmers to restore 200 hectares of Broadleaf Seagrass by 2030. 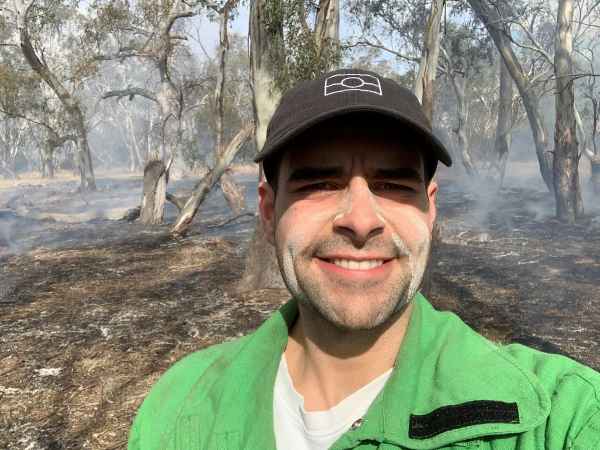 This award is for a Victorian Government employee who has influenced and improved sustainable land management practices.

Jackson Chatfield is a Gunditjmara-Kirrae Whurrong man and the State-wide Aboriginal Landcare Facilitator at the Department of Environment, Land, Water and Planning.

Jackson excels in combining caring for Country with sustainable agriculture.

He creates new partnerships between Aboriginal and Landcare groups and networks to enable further Aboriginal participation in Landcare. 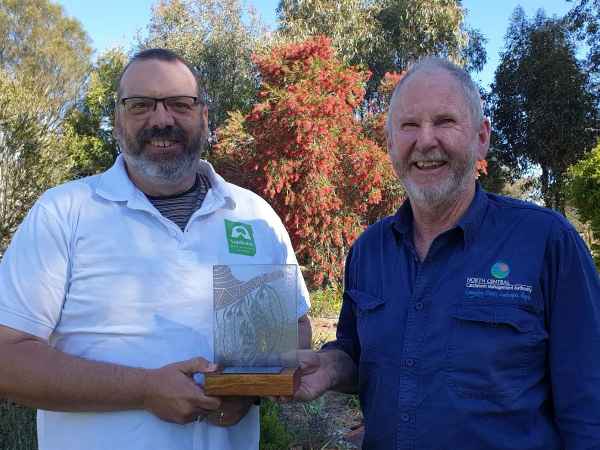 This award is for an outstanding network that has fostered sustainable land use through the adoption of improved land management practices to protect, enhance or restore a significant area on behalf of the community.

As the home of Landcare, Buloke and Northern Grampians Landcare Network has spent 35 years caring for the land, educating the public and seeking innovative ways of ensuring future environmental stewardship.

In 2020 the network coordinated 28 revegetation projects which saw 20,032 seedlings established across 32 hectares of the region. 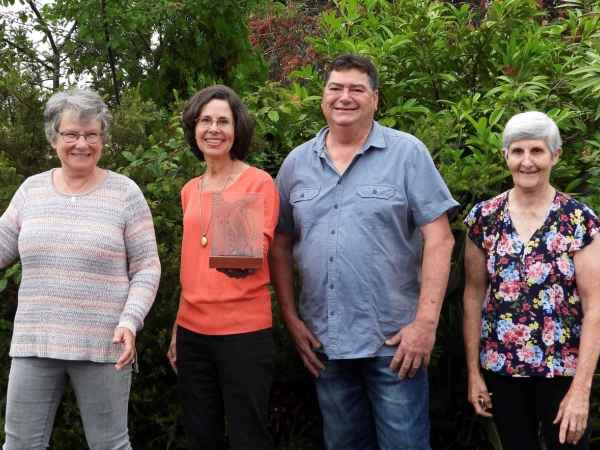 This award is for the outstanding contribution that volunteers make to protect, enhance or restore Victoria’s environment.

Gardens 4 Wildlife Albury-Wodonga is an initiative of Wodonga Urban Landcare Network that inspires people to create wildlife-friendly gardens and become involved in stewardship of Wodonga’s parks and reserves.

The group has had a significant impact in three and a half years, recruiting over 330 volunteers, donating at over 1,500 hours of their time, planting over 2,720 native plants in parks and 810 native plants in residential gardens. 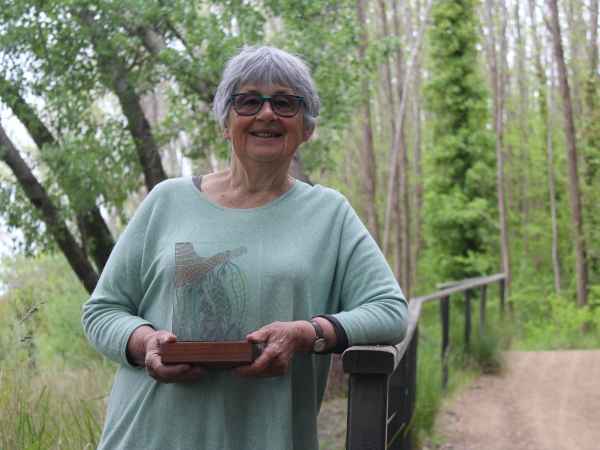 This award is for a group, network, or individual who has delivered Landcare projects or initiatives that have inspired and involved an urban population.

June Johnstone has been a major force in Clunes Landcare and Waterways Group’s successful rehabilitation of a degraded section of the Creswick Creek that runs through the township of Clunes. 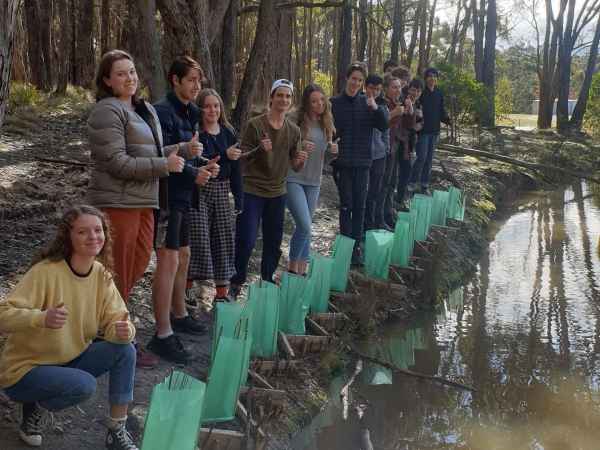 This award is a new category for 2021 to support a youth or school group to design and deliver a project that will help improve Victoria’s natural environment. Mentors will support the group.

Students from years 9 and 10 at the Alice Miller School will work with the Landcare facilitator from Upper Campaspe Landcare Network to create habitat for indigenous pollinators on the school grounds at Macedon. 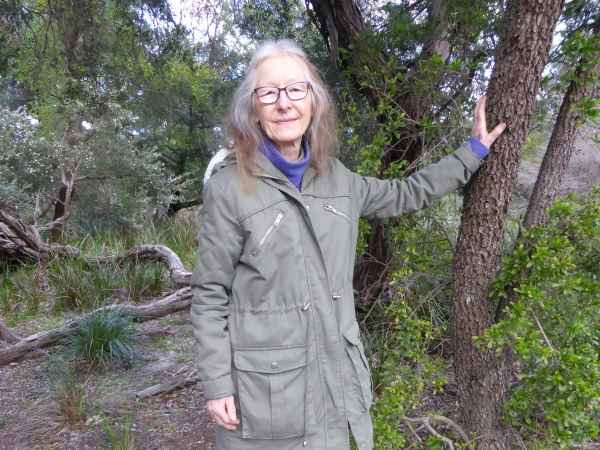 This award highlights the dedication of volunteers who work on public land parks and reserves, and for the long-term benefit of the local environment. This year is the 30th anniversary of the award.

Nina Earl has volunteered for the environment for more than 22 years.

She has been a member of Friends of Bradshaw Bushland Reserve in Mordialloc since 1999 and is active with many other groups.

She has been an influential presence and a champion for the local environment and community.

To read more about our amazing winners and highly commended's, check out the Victorian Landcare Catchment Management magazine available here.