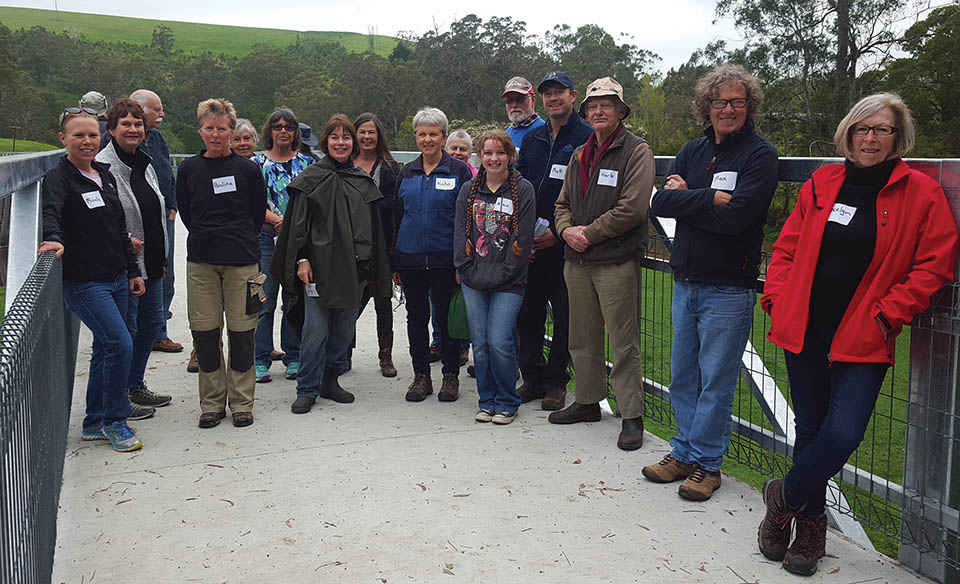 Members of the Nerrena Landcare Group have recently completed a management plan for 40 hectares of run-down wetlands on public land in South Gippsland.

The Black Spur Creek Wetlands Management Plan outlines a vision of how the group intends to restore the site. Guided by the plan, the group recently started its first work on the site, removing pussy willows thanks to funding from the West Gippsland CMA.

The plan and the works are especially exciting as the members of the Nerrena Landcare Group have known for a very long time just how special the Black Spur Creek wetlands are, but frustratingly have been unable to help.

However, due to the decrepit and unsafe trestle bridges along the railway line the site was inaccessible to the public, full of weeds and never managed or appreciated by the community.

According to Kate Walsh, a member of the Nerrena Landcare Group, the group was keen to open up the area but cautious to take on the project due to the likelihood of a highway realignment that would go straight through the middle of the site. The scale of the project was also an issue for a small group of volunteers.

“For years and years we kept bringing up the wetlands and their importance but always the voices of reason told us it was too hard for a small group of volunteers, already busy with their own land and projects,” Kate said.

Two key events then changed the outlook for the project – the opening of the South Gippsland Rail Trail through the middle of the site, and the confirmation of the highway realignment route. This spurred a new momentum among group members.

Nerrena Landcare Group president, Jill Vella, said some key members of the group received a burst of enthusiasm and decided to bring all of the site’s key stakeholders together.

“The project seemed to be beyond the scope of a small group of volunteers, so we suggested we really needed a plan where the works were handled by contractors. Yes we were keen to have working groups and citizen science but we knew it had to be based on a proper plan and proper work,” Jill said.

A grant from the South Gippsland Shire allowed the Nerrena Landcare Group to contract a consultant to produce the plan. A key component of the plan is to encourage the community using the rail trail to better understand the environmental values of the site, through access and interpretive signs.

“We want the Black Spur Creek Wetlands to be a place everyone can enjoy, because it really is special,” Jill said.

Willow control is now underway in the wetlands and along the adjacent Tarwin River. This work is funded by the West Gippsland CMA through the Victorian Government Regional Riparian Action Plan.

Read next article: Reaching out to the community with farm and nature walks