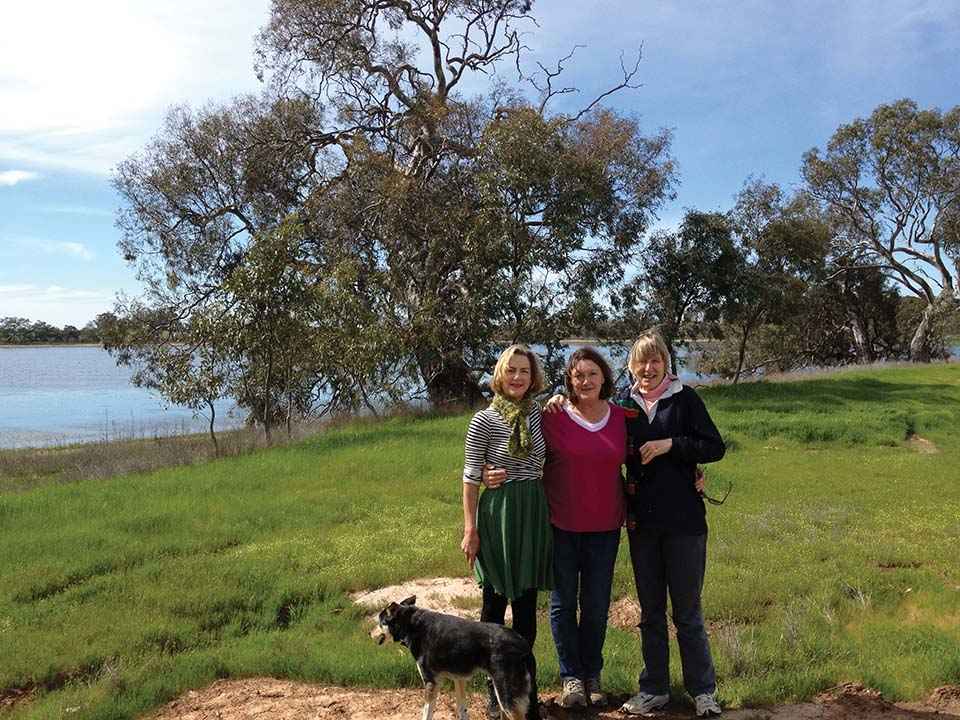 By Fiona Burchell and Prue McAllister

The Avon Plains Banyena Landcare Group, west of St Arnaud, is just a stone’s throw from ‘Stricta Hill’ at Winjallok where, in 1986, Joan Kirner and Heather Mitchell formalised the grassroots movement we now know as Landcare.

Our area comprises a valuable chain of wetlands including Lake Batyo Catyo and the Avon Plains Lakes, Avon and Richardson Rivers, Rich Avon Weir, and the York Plains. The area was once home to thriving Indigenous communities whose stories are written on the landscape in the scar trees, middens, grinding stones and ovens, and vast stone scatters. Now it is cropping country with lone-paddock trees and remnant vegetation concentrated along the waterways and roads.

In the 1980s the then Lands Department alerted the farming community to the threat of salinity and soil degradation in our area. The Avon Richardson Catchment Improvement Scheme was formed. The catchment was divided into local cells that formed the basis for all future Landcare groups. In 2013 the Avon Plains and the Banyena Landcare Groups merged with a strong vision of sustainable agriculture.

The group worked to fence off much of the Richardson River frontage, stock were excluded from the lakes and a flurry of tree planting took place as whole-farm plans were implemented. Lucerne was tested, bores were installed to monitor the water table, and locals came together to explore more efficient crops.

One of the group’s most active and passionate members was Carrie Jesse. A young schoolteacher from Melbourne, Carrie had married a local farmer and was there on ‘Stricta Hill’ with a baby in pusher, adding her voice to the cause.

A plan for Walkers Lake

Lake Batyo Catyo was a major focus for the Avon Plains Landcare Group. This water body, part of the Wimmera Mallee water supply, was home to over 70 species of birds and was an important breeding and nesting site for migratory birds.

Carrie was the project manager for a major funding initiative that established boardwalks along the edge of the lake, planted thousands of trees and created a corridor to nearby Walkers Lake. The long drought of the early 2000s, and the piping of the Wimmera Mallee System, saw the demise of Lake Batyo Catyo when it reverted back to an empty swamp.

The group campaigned to have Walkers Lake established as a permanent water body and Carrie Jesse helped to develop a management plan for the lake. Now filled with a piped recreational water allocation, it is a magnet for birdwatchers, walkers, boaters, campers, water-skiers and duck shooters.

The Walkers Lake Management Plan aims to ensure that the inherent value of the lake as a wildlife refuge is not compromised with shared recreational use. Unfortunately this continues to be a challenge. There are ongoing issues with the destruction of habitat for birds, animals and frogs from the pressure of campers, motor bikers, kayakers and shooters.

“The Walkers Lake Management Plan aims to ensure that the inherent value of the lake as a wildlife refuge is not compromised with shared recreational use.”

In memory of Carrie Jesse

Carrie Jesse was a staunch advocate for Walkers Lake. Carrie died earlier this year. The Avon Plains Banyena Landcare Group will continue to work towards protecting the beauty, cultural and environmental assets of this precious drop of water in the Wimmera and we do this in memory of our friend Carrie. Her extraordinary contribution to the land and wetlands that she loved are an inspiration to us all.

Read next article: Reflections of a young Landcare leader


By Fiona Burchell and Prue McAllister