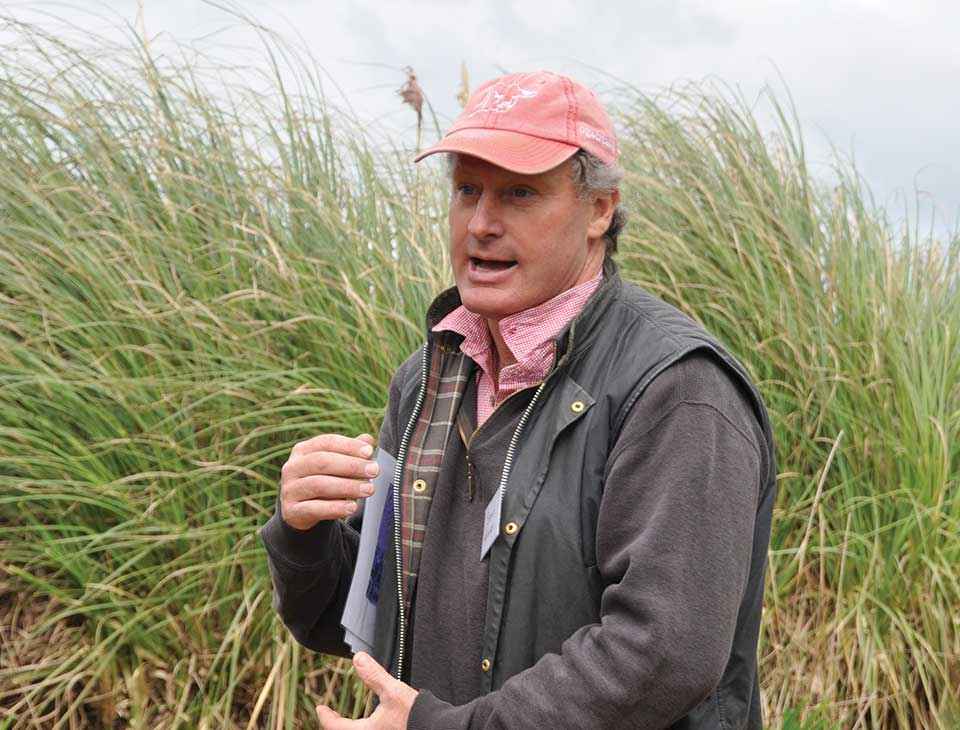 Above Simon Falkiner talking about the soil acidification, soil biology and cover cropping trials on his Freshwater Creek farm during a field trip at the 2014 National Landcare Conference.

Simon Falkiner manages a 240-hectare mixed enterprise family farm at Freshwater Creek near Geelong. The farm produces merino sheep (for meat), cereals and oilseed crops, as well as hosting several long-term trials focusing on soil acidification and soil biology and the manipulation of pastures to improve productivity and diversity.

Simon values biodiversity and integrates it into his farming system. Soil health, diverse mixed species pasture systems, integrated pest management along with crop and grazing management are all part of the mix. An 11-hectare site of critically endangered remnant plains grassland on the property is fenced and managed for biodiversity under the Victorian Volcanic Plains Tender program.

Simon is happy to challenge traditional farming systems and take his knowledge to a national scale. He has embarked on a program to introduce Angus (cattle) genetics into North Queensland’s Brahman dominated herd, and has also researched and adopted innovative grazing management techniques.

The grazing of grain crops to improve feed availability while minimising grain loss has had a huge impact on his farming system. The introduction of cover cropping has provided a method of capturing previously wasted summer rainfall events, allowing for increased livestock production and soil health benefits such as reduced soil temperatures.

“The key is to have a purpose for undertaking an activity. Farmers don’t need extra jobs, we have lives to lead,” Simon said.

Expanding the traditional role of fodder and pasture crops to help combat weeds is an example of this.

“Herbicide resistant weeds can and do reduce gross margins in crops. Fodder crops are a good option to clean up weedy paddocks while still generating income. A two-year fodder or pasture phase with grazing and fodder harvesting prior to weed seed set will remove over 90 per cent of annual ryegrass seeds from the seed bank,” Simon said.

Simon has undertaken extensive riparian restoration works along Thompsons Creek to protect and enhance remnant vegetation and is involved in partnership projects to monitor and increase populations of the threatened Yarra pygmy perch and growling grass frog. This work has the downstream benefit of improving one of the last mainland habitats of the endangered orange-bellied parrot.

Simon values biodiversity and integrates it into his farming system. Soil health, diverse mixed species pasture systems, integrated pest management along with crop and grazing management are all part of the mix.

Simon is also the President of the Surf Coast Rabbit Action Network where he is committed to achieving a coordinated approach to rabbit control through engaging stakeholders and recruiting grass roots support. The formation of cluster groups, driven by interested locals, has seen a ground swell of support from government bodies looking to better target their rabbit control works.

As Chair of the Surf Coast and Inland Plains Landcare Network, Simon helped to establish the Beach to Bush biolink project. He is a Community Advisory Group member of the Corangamite CMA, has been a carbon farming adviser and mentors students from five different tertiary institutions. Simon is widely recognised as a leading farmer who is passionate about learning and supporting others.

The award judges commended Simon on his management of a complex farming and environmental system that is improving ecosystem functions, crop and livestock productivity per hectare, and business profitability while accommodating climate change. They were also impressed with his commitment to sharing his Landcare farming story with others, particularly students.