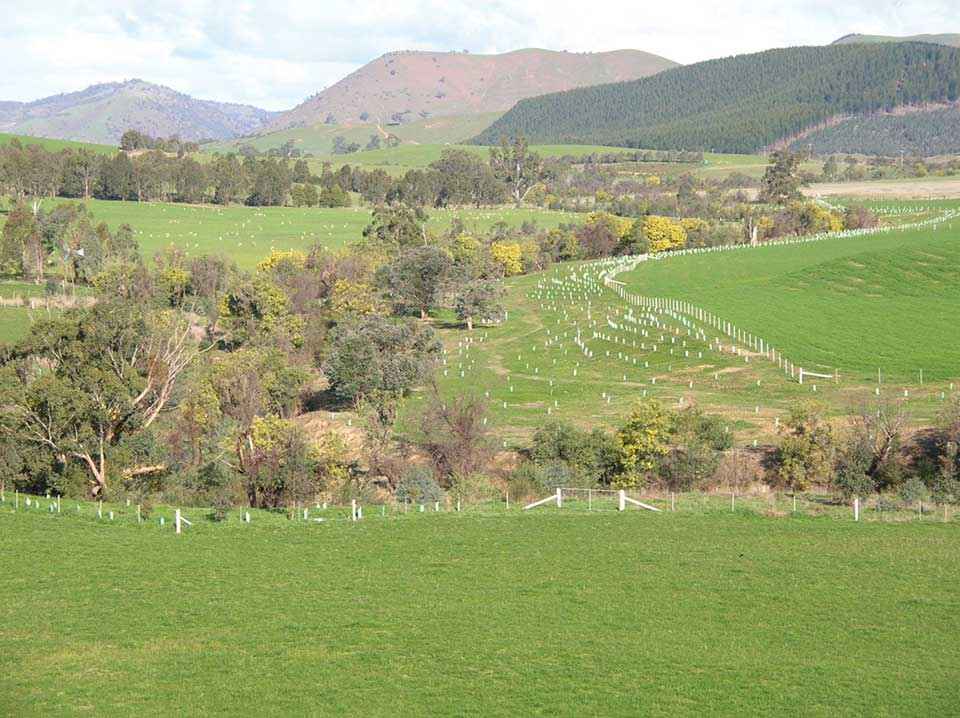 Above Fencing and revegetation work undertaken by the Strath Creek Landcare Group along the King Parrot Creek.

Terry’s Landcare journey began in 1989 when he and his wife Janet purchased their property, ‘The Three Sisters’ in Flowerdale. Terry and Janet embarked on a long-term and ongoing restoration plan that has seen the once cleared, eroded and weed-infested property become a model of best practice sustainable farming.

Terry credits Janet with helping to develop the Strath Creek Landcare Group and supporting him in his many Landcare roles.

“I’m fortunate to have a very supportive wife. Janet has been the quiet achiever behind the Strath Creek Landcare Group as its secretary for many years. She’s great at getting things done and also very patient with the impact Landcare has on my time,” Terry said.

Terry’s Landcare ethic is built on three critical elements; recognising the threat of land clearing, pollution and global warming, the value of Landcare for social connectivity, and an understanding of the importance of community partnerships.

As a member of his local Strath Creek Landcare Group, Terry supported the development of partnerships between the Yea and District Community Bank and the Upper Goulburn Landcare Network, and was instrumental in sourcing funding to establish the position of Environmental Officer at the local Murrindindi Shire Council. As a result, the shire now has an entire environmental team that works closely with the Upper Goulburn Landcare Network on blackberry action programs, roadside vegetation management, farm planning workshops for landholders, and National Tree Day activities.

Following the 2009 Black Saturday fires, the Upper Goulburn Landcare Network delivered an effective fire relief program. Terry made sure the program was inclusive and community-driven. The program is now used as a model by other Landcare networks due to its success.

Terry has also been instrumental in coordinating weed control activities in his local area, helping to establish the King Parrot Creek Blackberry Action Group and becoming a committee member of the Victorian Blackberry Action Taskforce.

Terry puts a lot of value on the role of Landcare for increased social connectivity.

“Rural communities have a high rate of depression and suicide. We’ve certainly seen a lot of damaged people in this area since the 2009 fires. The closure
of schools and other government services in rural areas has also caused a breakdown in important community bonds.

“Landcare provides a sense of purpose for people and a great opportunity for social interaction. Participating in a Landcare event is invigorating and it helps us to develop strong bonds with each other so we can be aware when someone is struggling. I think there are real mental health benefits to Landcare and they should be recognised at a government level,” Terry said.

Terry believes that when you bring the community together there will be many desirable outcomes, not only for the environment, but also for the social life of the community. His passion for Landcare has been demonstrated at a local, regional, national and even international level; he inspires everyone he meets.

In 2016 Terry was awarded the Medal of the Order of Australia for services to conservation and the environment.