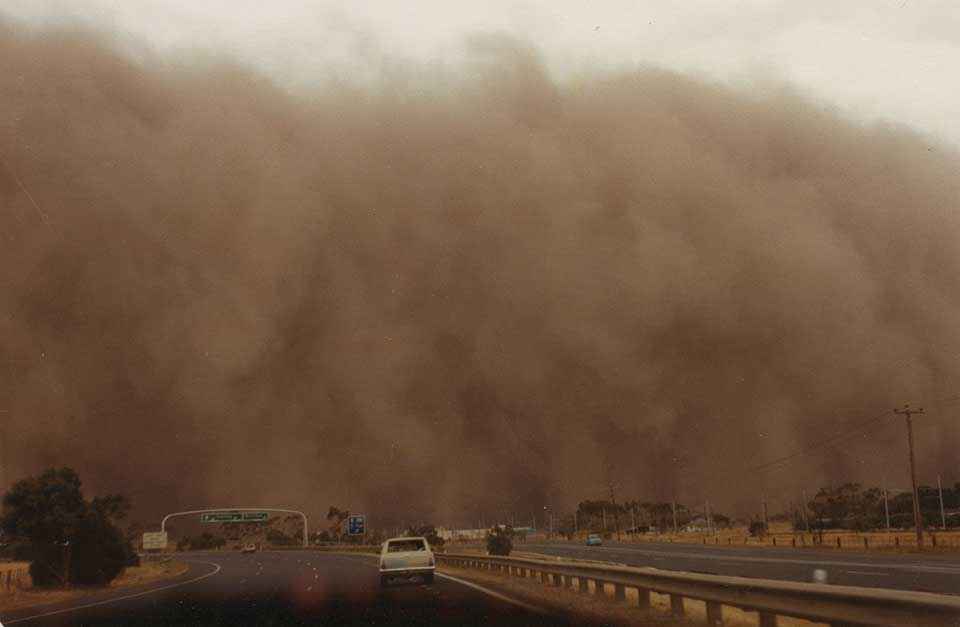 Above A dust storm rolling towards Melbourne from the direction of Geelong in February 1983.

Soil is a remarkable asset, effectively gifted to this planet, and consequently to us.

It is for this reason that I cringe at our cavalier treatment of soil. We regularly take it for granted, compromise it and abuse it.

If humanity is to have a reasonable future, it is the soil that will both facilitate and moderate it.

I trained as a soil scientist and have many years of experience as a hands-on land manager. I am a soil enthusiast. I see a powerful need for us to both respect and embrace soil.

Soil was in place and doing an outstanding job long before humans. It didn’t develop to meet our needs, but because planetary evolution required a moderating and buffering layer between the atmosphere, the hydrosphere and the geosphere. It is simply our good fortune that this thin layer went on to become the cradle for land-based life.

Soils differ in terms of their particular physical, chemical and biological composition, but they have some common characteristics.

• a permeable and porous surface;

• a vast area on the perimeter of the pores which in combination with the pore space enables physical, chemical and biological activity;

I believe that it is these fundamental characteristics of soil that should determine how we define soil health. Many current soil health indicators are based on the ability of soil to produce particular crops. However, a soil that can push out a high yielding crop of wheat isn’t necessarily healthy. We need a definition of soil health that encompasses all the roles of soil.

"If humanity is to have a reasonable future, it is the soil that will both facilitate and moderate it."

An article in The Age in 2006 defined human health as, “…not merely the absence of disease or infirmity, but a state of complete physical, mental and social wellbeing. It is a state where every part functions to sustain, that enables you to reach your full potential, and build maximum resilience to illness”. Soil managers have a lot to learn from this.

Soil can also be thought of as a city. It has living spaces, working spaces, and many entry and exit points. There are transport routes for water, gases, nutrients, energy and organisms, and there are many cross dependencies. To create a liveable city all of the different components must beperforming their roles effectively. We don’t want ghettos to form, or damage from insurrection or physical disruption.

Soil function is dependent on the pores contained within the soil’s physical structure. Approximately 50 per cent of soil volume is pore space.

In the 1960s distinguished CSIRO soil scientist Bill Emerson calculated that one cubic centimetre of a clay soil might have up to seven square metres of active surface contained within it. It is on these hidden surfaces that organic exchanges, nutrient release, recycling, respiration and the production of soil stabilising compounds occurs.

Once we have decided how to define a healthy soil, our next task is to question whether soil health is declining. There are the soils we have turned off by covering them with impermeable surfaces (buildings, roads, carparks) and there are the impacts on soil caused by high input land management practices. The axe, cloven-hoofed animals, the plough, fertilisers and herbicides have all caused significant changes to soil. Recent trends towards high inputs for high yields are seeing soils managed in an industrial fashion.

Taking a historical perspective can expand how we think about soil. In this country we have been oblivious, until very recently, to how Aboriginal people managed the soil. We didn’t recognise or appreciate the techniques they had developed over many thousands of years.

Some recent thinkers and writers are encouraging us to look at what was achieved by the historic set of management practices of Australia’s Aboriginal population, to think carefully about what we have done since then, and to reframe our view of the future. I recommend Bill Gammage’s The Biggest Estate on Earth (2012), Bruce Pascoe’s Dark Emu (2014), Don Watson’s The Bush (2014) and Charles Massy’s Call of the Reed Warbler (2017).

None of these writers are suggesting we can or should revert to pre-1788 Australian land management, but there are significant lessons to be learnt that can help us to evaluate and improve our land management to get better productivity (not necessarily production) and sustainability of our natural resources.

The time is right for us to start asking some important questions about what we need from the land and how we can transition to true environmental sustainability.

We can’t continue to allow environmental extraction and argue that it is economically sustainable. To ask and answer these questions we need to better understand how dependent we are on soil, and in turn, how critical soil condition is for ecosystem management.

Perhaps we should expand our thinking outwards too - to consider the planetary interdependencies between soil, atmosphere, hydrosphere and biosphere. Soil is not just an industrial medium to grow food. Soil and its attendant ecosystem is far too valuable for that.

We cannot continue to treat soil simply as a business asset. If we cause a gradual decrease in the economic value of soil through use, wear and tear, or obsolescence, or change in demand, we cannot replace it. Soil depreciation is not an option, but soil appreciation is.

David Cummings is a soil conservationist and land manager. He is a member of the Environmental Farmers Network, the Mountain Rivers Landcare Group (West Gippsland) and an associate of the Victorian Catchment Management Council.