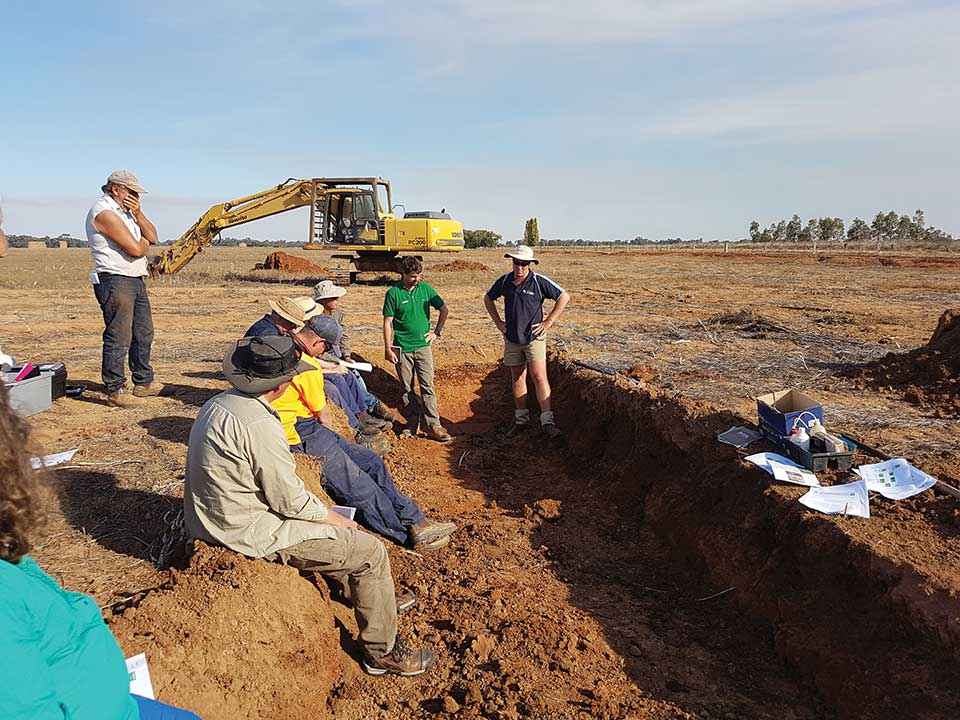 Above A field day west of Mitiamo in northern Victoria looked at how chicken manure had changed the structure of sodic subsoils.

Problems with soil health are not restricted to northern and north central Victoria – they are endemic to south eastern and southern Australia, and present in most countries around the world.

According to the United Nations Food and Agriculture Organisation, if we continue with current agricultural practices the world will be depleted of topsoil within the next 60 years. Viewed alongside exponential population growth and climate change, this is a cause for great alarm.

To feed a world population of more than nine billion in the coming decades will require almost doubling our productive capacity, which will require considerable improvements in soil health. How do we deliver against this challenge?

More than 150 years of traditional agriculture has left many soils in north central and northern Victoria depleted. The inherent properties of the soils in these parts of the state mean they are sodic and dispersive, and in consequence issues with salinity, wind and water erosion, compaction, and a host of other soil issues are now common.

In 2009 the North Central CMA launched its Farming for Sustainable Soils (FSS) project. The project recognised the best opportunity to improve the soils of the region was to work in partnership with farming communities, encouraging them to assume responsibility for the condition of their soils.

The project has brought farmers from across the catchment together to build soil health programs suited to local conditions and local circumstances. Fourteen FSS groups involving more than 400 farmers were established. Each group employed a part-time community facilitator. The facilitators and CMA project managers formed an over-reaching FSS task force.

The groups have conducted extensive local soil sampling, laboratory analyses and field assessments, which has improved understanding of local soil condition and soil management. The groups have been sharing their knowledge with each other and also bringing in expert scientists from across Australia.

The biggest challenge for all groups is how to increase organic carbon in their soils. Organic carbon improves the biology of soils and aids the formation and retention of soil peds (aggregates of soil particles that are separated by pores or voids), which provide soil structure. This is particularly important in the sodosols that account for three quarters of the soils in North Central CMA region.

When the dispersive sodic subsoils that lie below the shallow topsoils lose structure and the entry of rainfall is limited, as is the penetration of plant roots, the productive capacity and health of the soil declines. These subsoil constraints limit the water available to plants and alter landscape hydrology.

"More than 150 years of traditional agriculture has left many soils in north central and northern Victoria depleted."

Improving the organic carbon content of soils is not easy, particularly where farmers are locked into continuous cropping regimes that have little or no capacity to hold on to carbon.

The FSS groups are attempting to identify economically viable farm management practices that will produce sufficient improvements in soil biology to enhance soil structure. It is a ‘chicken and egg’ problem because good soil structure is needed to support the active growing plants that supply the root mass in support of improving the biology.

There’s still much to learn, but the FSS groups are now devising, developing and testing potential solutions. The groups have a variety of local trials underway that include injecting manures into subsoils, experimenting with growing cover crops, using the tap rooted tillage radish to break-up subsoil hard pans, deep ripping and gypsum applications to shatter subsoils, and experimenting with liquid fertilisers.

The groups are continually looking for options and new ideas and actively seeking support from experts for guidance and advice. The CMA is committed to the partnership approach that underpins the FSS project. Numerous industry groups have also been involved in the FSS project, as well as local Landcare groups and networks.

The Farming for Sustainable Soils project is supported by North Central CMA through funding from the Australian Government’s National Landcare Program.