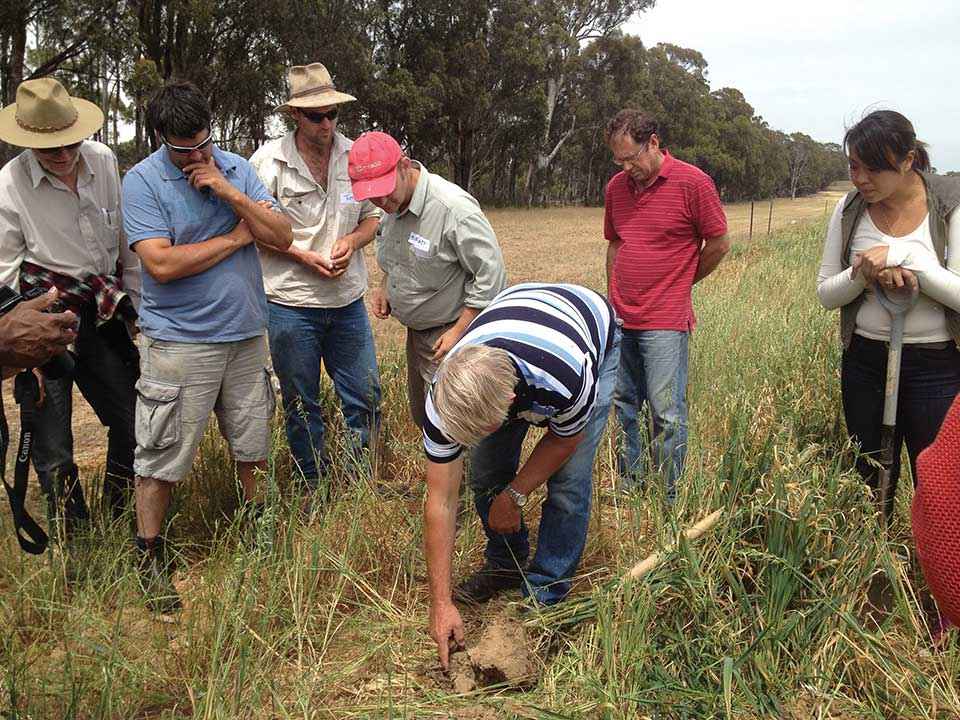 Above Neil Harris (centre) checking the soil on his Costerfield property during a soil health field day in 2013.

By Karen Brisbane-Bullock and Norm Tozer

Soil health is an important issue for all farmers, and ensuring healthy soils starts with understanding what type of soils you have and how you can improve them.

The Goulburn Broken CMA’s Beyond SoilCare project (funded through the Australian Government’s National Landcare Program) was launched in 2011 and has increased community understanding and awarenss of soil health in the region.

Community groups have received grants to investigate issues they see as important. In 2013 the Soil Health BestWool BestLamb Group was keen to learn more about sodic soils – this refers to soils that are chemically inhospitable, hard setting and prone to waterlogging. The group decided to investigate if chicken manure could increase soil health by increasing soil structure in sodic soils.

"Soil health is an important issue for all farmers, and ensuring healthy soils starts with understanding what type of soils you have and how you can improve them."

Chicken manure had been successful in increasing organic matter on soils on a cropping country project in western Victoria. In addition, chicken manure is easily accessible in the region due to the large chicken farms.

The research was conducted on Neil Harris’s farm at Costerfield. Neil chose some of his worst country for the trial. Chicken manure was applied at depth in plots that were then sowed to a high value seed oat crop. The aim of the oat crop was to recoup the costs of the manure quickly (from previous trial work, $1200 per hectare), then use the paddock with its increased porosity and water holding capacity for grazing. It was hoped the better-quality pasture would produce a longer growing and grazing season.

The practice is expensive, depending on cartage for the manure, but could still be cheaper than purchasing more land, as surrounding land prices start at around $3000 per hectare.

The trial included three replications of four treatments and a control treatment where nothing was done. The trial sites were 0.4 hectare in size. The project got underway in June 2013 when the oat crop was planted. A contractor who collected and carted (from local sheds), also spread the chicken manure. Soil samples were collected in October 2013 and September 2014.

• a deep rip adding chicken manure at 20 tonnes per hectare to 40 centimetres in depth;

• a deep rip adding chicken manure at 12 tonnes per hectare plus humates at one tonne per hectare to 40 centimetres depth;

• chicken manure applied on the surface at 20 tonnes per hectare and lightly worked in.

The trial was complicated by waterlogging after sowing in 2013 and 2014 and a shift in crop in 2015 due to volunteer rye grass showing better persistence than the original seed oats.

Despite these challenges the group expects the trial site to enhance ecosystem functions by improving soil moisture, nutrient retention and carbon cycling. Subsequent improvements in soil health and water holding capacity may also see changes to the use of the land, such as moving into cropping perennials, which was not feasible before.

Neil Harris believes the trial has demonstrated the possibility of turning poor land into more productive land for grazing sheep or cropping.

“I am glad we tried this on our land as it shows us what can be achieved. The future is looking drier, so trying to grow more with less water is the way to go,” Neil said.

'Neil Harris believes the trial has demonstrated the possibility of turning poor land into more productive land for grazing sheep or cropping."

The partnership between the Goulburn Broken CMA and the BestWool and BestLamb Group has seen 92 community groups supported with soil health projects involving more than 4500 participants.

Read next article: Around the State – News from Regional Landcare Coordinators


By Karen Brisbane-Bullock and Norm Tozer