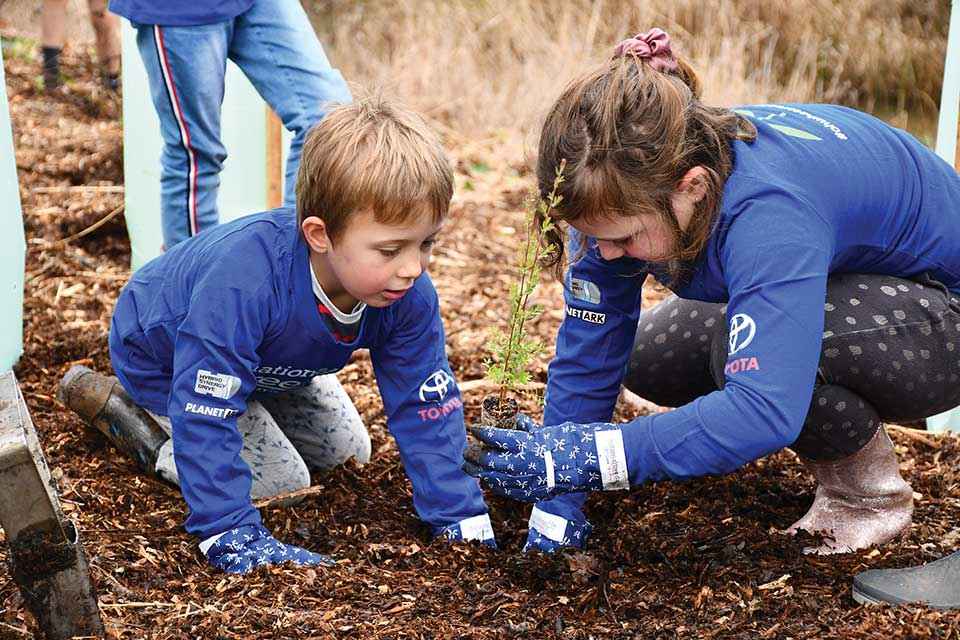 Above From left, Tommy Cunningham and Layla Onderwater enjoy the chance to get dirty and help the environment at a National Tree Day celebration in Hamilton.

Aboriginal Landcare Facilitator
Congratulations to all of the winners of the 2019 Victorian Landcare Awards. Each recipient was a deserving winner for their amazing work in addressing the environmental challenges to keep our Country healthy.

A very special congratulation to the Woka Walla Land Management Crew representing the Yorta Yorta Nation Aboriginal Corporation who received the Indigenous Land Management Award. This is a huge achievement for the community and is a fantastic example of how to bring together Aboriginal people to manage Country, whilst also creating pathways for education and employment to help achieve Aboriginal self-determination.

Woka Walla are one of many Aboriginal land management crews around Victoria offering services across both public and private land, applying a combination of Traditional ecological knowledge and contemporary land management practices to protect and preserve Country and natural resources.

Good luck to the winners who will now represent Victoria at the 2020 National Landcare Awards.

For more information email jackson.chatfield@delwp.vic.gov.au or call Jackson on 0419 504 451.

Corangamite
We extend our congratulations to the nominees and winners of the 2019 Victorian Landcare Awards and thank all our hard-working volunteers for their incredible contribution to the health of our lands and waterways.

Heytesbury District Landcare Group led a post fire family day out at Brucknell and a field trip to Gippsland to learn more about building soil carbon and biology during National Landcare Week.

The region’s Landcarers hosted ‘From the Ground Up: Growing Regenerative Agriculture in Corangamite’ conference in September. This popular conference saw national and regional practitioners discussing key technical, economic and social practices in improving soil health, biodiversity and other environmental outcomes.

Welcome to Elisia Dowling who starts as the CMA’s new Landcare and Volunteer Coordinator at the end of October.

For more information visit www.ccma.vic.gov.au (What we do/Community Landcare) or contact Elisia Dowling on 5232 9100.

East Gippsland
Landcarers from the region have been taking time out from their usual activities to acknowledge and celebrate their achievements. A regional celebration dinner held at Lakes Entrance in June was attended by more than 130 people. The highlight of the event was the showing of nine locally produced videos on Landcare people, passion and projects.

Swifts Creek Ensay Landcare Group’s video tells the story of their Poet’s Walk project in Swifts Creek township. The group has partnered with multiple agencies and other community groups to transform the overgrown area into a valuable community asset. The group was rewarded for their hard work by receiving a highly commended acknowledgement in the Landcare Community Group Award category at the 2019 Victorian Landcare Awards.

For more information visit www.egcma.com.au (What we do/Landcare) or contact Carolyn Cameron on 5150 3682.

Glenelg Hopkins
Farmers from across the region gathered in Hamilton for Sheepvention in early August. The show had a focus on innovation, with the Smart Farm demonstration partnership project being a centrepiece of the new Innovation Hub. A presentation on the demonstration trials was officially introduced by the Hon. Dan Tehan, MP, Federal Minister for Education, who was enthusiastic about the collaborative project which has engaged many young farmers across the region.

A National Tree Day celebration in July saw 150 people gather to plant more than 1100 trees along the Grange Burn River in Hamilton. The day was held in partnership with Southern Grampians Shire Council, Wannon Water and a local Toyota dealer. Families enjoyed planting a native seedling, face painting, a native animal zoo and a barbecue lunch.

For more information visit www.ghcma.vic.gov.au (Get involved/Landcare) or contact Kellie Nilsson Osmond on 5571 2526.

Goulburn Broken
It was great to see the hard work and dedication of Lanie Pearce recognised as the Joan Kirner Landcare Award winner at the 2019 Victorian Landcare Awards. Congratulations also to the Woka Walla Land Management Crew and Fraser Pogue.

New Landcare facilitators are joining the Goulburn Murray Landcare Network and Upper Goulburn Landcare Network. The region’s groups and networks are grateful for the support from this year’s Victorian Landcare Grants – 24 project grants and 21 support grants have been funded from our regional allocation.

The recent release of the Victorian Landcare Program’s Victorian Landcare 2017-2018 Achievements Report highlights the impressive extent of work that Landcare delivers across the state and our region. The Upper Goulburn Landcare Network’s ‘Kids Teaching Kids’ forum in Yea was a good example of this.

Mallee
As always, the Mallee has had variable rainfall for 2019. Farmers in the southern part of the region had a fantastic autumn break and were feeding out nutrient to what looks to be a bumper crop while farmers in the northern cropping region of the Millewa are facing severe drought conditions.

Landcare groups continue to do a great job despite the conditions, submitting 26 applications for the 2019-20 Victorian Landcare Grants – a 36 per cent increase from last year. Most applications involved rabbit control; however, track works, ecological surveys, habitat creation and revegetation were also proposed. Thanks to all of the local Landcare facilitators for their hard work on the applications.

For more information visit www.malleecma.vic.gov.au (Get involved/Landcare) or contact James Walker on 5051 4377.

North Central
Congratulations to all the nominees and highly commended and commended Landcarers at the 2019 Victorian Landcare Awards, and to Malmsbury District Landcare Group which won the Australian Community Media Landcare Community Group Award. What a wonderful achievement.

The North Central CMA has partnered with Wimmera CMA, the Pyrenees Shire and Project Platypus (Upper Wimmera Landcare Network) for 2019 Chicks in the Sticks rural women’s event to be held in October at Moonambel. Now in its seventh year, last year’s event sold out within days of ticket sales opening.

We welcomed the Intrepid Landcare crew to the Mount Alexander region in August. Twenty-five young people came together over a weekend to grow their Landcare ideas and gather new skills in leadership. The group was very inspired by our local Landcare legends dinner. They are now connected on social media and are committed to getting involved in Landcare projects in the region.

WULN launched the Wodonga Regional Waterway Action Plan in August with its partners, Wodonga Council and North East CMA. The plan provides guidance for restoring and managing local waterways and catchments and gives a health overview with a creek-by-creek summary. It is believed to be the first plan led by a community group. To see the plan, go to www.wodongalandcare.org.au

Port Phillip & Western Port
Landcare and other volunteer environmental groups in the region presented their aspirations for on ground projects and other collaborative concepts as part of the annual Victorian Landcare Grants process in June. More than $1 million worth of support, start-up and project proposals were submitted to the CMA’s regional assessment panel.

The recent Yarra Ranges Intrepid Landcare Leadership retreat was inspiring for the young people involved and the passionate Landcare volunteers who supported the event. Wurundjeri Traditional Owners and Healesville Sanctuary also contributed expertise to the event.

The CMA will share some outcomes from the event at the upcoming NRM Knowledge Conference in November while a new Intrepid Landcare group is in the process of forming in the Yarra Ranges.

Congratulations to all nominees and winners at the 2019 Victorian Landcare Awards, three of whom were based in the Port Phillip and Western Port region.

West Gippsland
The region has been experiencing contrasting weather conditions, with lots of rain in the south, whereas the eastern parts are remaining dry and are still in drought, providing tricky conditions for planting and direct seeding. Several Landcare groups, such as the Merrimans Creek and Woodside Landcare groups, have run hugely successful events to support farmers during this tough period.

Maffra and District Landcare Network welcomed Nicola Hair to the role of coordinator. Nicky has extensive experience in working as a farm consultant, supporting irrigation and whole farm planning services to farmers in the Macalister Irrigation District and Gippsland region.

It’s been a great tree planting season, with a special mention to Latrobe Catchment Landcare Network’s blockbuster National Tree Day events where more than 800 people including students from 13 different schools, Landcare and community members planted more than 10,000 trees at 20 different sites from Neerim to Rosedale.

For more information visit wgcma.vic.gov.au (Getting involved/Landcare) or contact Kathleen Brack on 5613 5966.

Wimmera
Congratulations and thank you to those representing the Wimmera at the 2019 Victorian Landcare Awards. Wimmera Landcarers are well aware of John Pye’s outstanding effort over the last couple of years in particular, and it was pleasing to see his story shared and celebrated with others across the state. Congratulations to Jallukar Landcare Group, Mirinda Thorpe, Horsham Urban Landcare Group and all the other award winners and nominees.

The annual Wimmera Biodiversity Seminar was held at Rupanyup on 5 September 2019 as part of National Landcare week.  Author Tim Low joined a line-up of thought-provoking presenters and more than 100 local community members to examine the theme, ‘A Climate for Change.’ This was the 22nd seminar and it remains a much-loved tradition in the Wimmera.

The 2019-2020 Victorian Landcare Grants projects in the Wimmera will achieve an exciting mix of on-ground and capacity building outcomes for the community. We look forward to supporting groups through the delivery of these projects and helping to celebrate their successes.

For more information visit www.wcma.vic.gov.au (Get involved/Landcare) or contact Joel Boyd on 5382 9919.

Access the Victorian Landcare magazine's index to search for other stories by author, title, and subject, here.