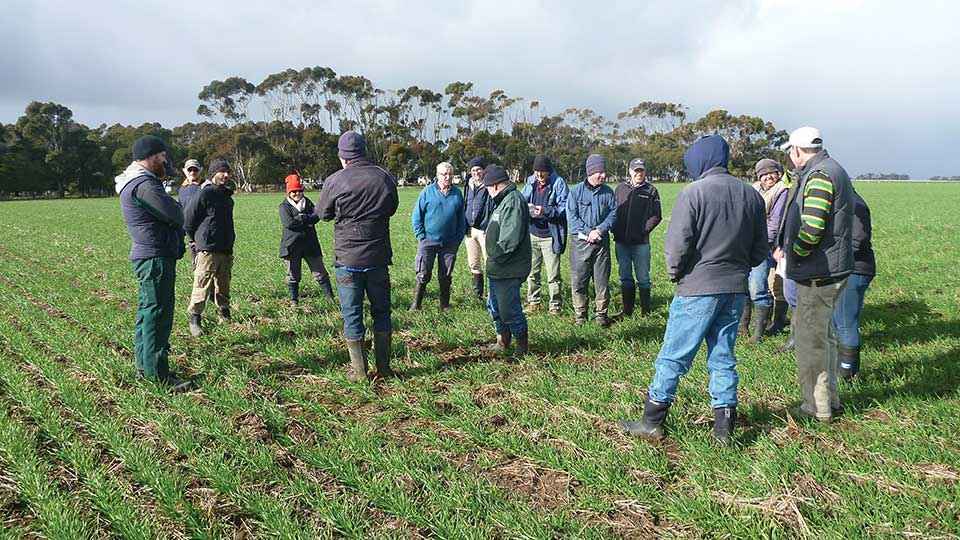 Above A Cundare Duverney Landcare Group field walk to assess stubble incorporation after sowing in 2017.

Established in 1994, the Cundare Duverney Landcare Group (CDLG) is located in the high rainfall zone of the western district of Victoria, within the catchments of Lake Corangamite and Lake Gnarpurt.

The group has 25 member properties – mainly family-run mixed cropping, fat lamb and wool enterprises. The group has a history of revegetation, weed control and waterway protection projects. With some younger active members, sustainable farming practices have come to the fore.

The group is part of the Corangamite Lakes Landcare Network (CLL) and has participated in CLL projects on soil characterisation and predictive soil modelling with the aim of better understanding local soils and soil constraints.

Continuous cropping is increasing in the area and CSIRO research shows that even under zero tillage systems soil carbon is declining in continuous cropping systems. This is a concern for soil health. There is also the question of what to do with high loads of cereal stubble. Stubble is generally burnt across much of the district, a practice that produces greenhouse gases.

CDLG members were keen to address these issues to prevent soil carbon and soil condition decline. Research by Clive Kirkby from CSIRO demonstrates that to increase soil carbon levels the stubble must be incorporated into the soil, and, to ensure the stubble decomposes, key nutrients (nitrogen, phosphorous, sulfur and potassium) must be adequate in the soil or added to build the soil microbial population in sufficient levels to consume the tonnage of stubble present.

The stubble and additional nutrients need to be incorporated soon after harvest to ensure sufficient time for decomposition while temperatures are warm and when there is a better chance of some summer rainfall to stimulate soil microbial activity. Microbial action converts the organic matter to a more stable form of soil carbon, which increases the plant-available water holding capacity of the soil.

In 2017 CDLG obtained a grant from Landcare Australia Ltd to trial the practice at two sites. The project has been extended this year through a National Landcare Program Smart Farms Small Grants Round 1 grant and now includes
14 properties across the CLL area with sites covering more than 100 hectares.

According to CDLG President Justin Alexander the results are showing no productivity decline in comparison to the burnt areas and improvements in soil health and soil structure.

“Stubble incorporation using speed discs had been tried in the past by a number of local farmers, with mixed results at best. The heavy clay soils and cold wet winters resulted in poor stubble decomposition leading to blockage of air seeders at sowing and increased slugs, snails and disease in the subsequent crop. Incorporation tended to happen later in autumn as soil temperatures dropped and microbial activity declined.

“When nutrients (principally nitrogen) were applied at sowing, or later at mid-season, the microbes used it before the crop, which robbed the crop and lead to yield loss. These issues became barriers to adoption and caused many farmers to abandon the practice and revert to stubble burning.

“By using speed discs and adding extra nutrients we’ve overcome these problems and there’s been a strong uptake of the new techniques,” Justin said.

The group has shared its research with field walks and discussions, newsletters and an article in the Spring 2018 Victorian Landcare and Catchment Management magazine.

A further research project to improve crop nitrogen use efficiency and reduce nitrogen losses into waterways and the RAMSAR listed Lake Corangamite is also planned.