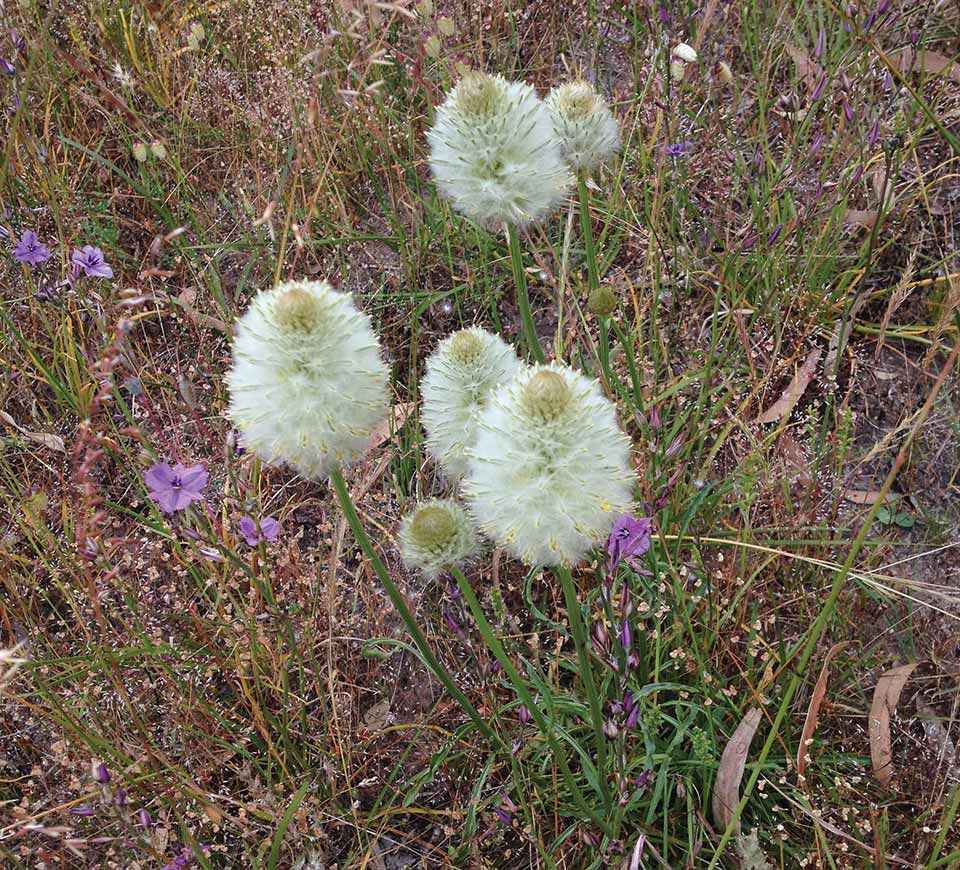 Above Chocolate lilies and featherheads at the Cressy Harness Track.

A partnership project has achieved some significant milestones in protecting the critically endangered Natural Temperate Grasslands of the Victorian Volcanic Plain (VVP). The VVP extends from Melbourne to near the South Australian border, and from Warrnambool in the south to the Grampians and Ararat in the north. It is one of 15 biodiversity hotspots in Australia and supports more than 25 nationally threatened flora and fauna species.

The grasslands were once widespread throughout the VVP, but the region has been extensively cleared for agriculture and less than one per cent of the previous extent of the grasslands now remain. Most of the high-quality grasslands are limited to small, isolated pockets on roadsides and rail reserves.

The linear formation of these reserves makes the grasslands more susceptible to weed invasion which creates challenges for management.

Weeds severely impact on native grasslands by competing for space, resources and pollinators. Other threats include vegetation clearing, fragmentation, rabbits, soil disturbance, road, rail and utilities works and maintenance, a lack of burning, and stock grazing and droving.

In 2014 DELWP, in partnership with the Glenelg Hopkins and Corangamite CMAs, received funding from the Australian Government’s National Landcare Program for a Linear Reserves Project (LRP), with the aim of reducing critical threats to native grasslands on these reserves and enhancing their condition, connectivity and resilience.

The LRP uses a multifaceted approach to targeted weed control.

As burning is a natural process under which these native grasslands were formed, this process also has other ecological benefits for the grasslands and associated flora and fauna species. Where possible, weed spraying activities are coordinated as a follow-up control method on recently burnt sites to help maximise control effectiveness.

The successful partnerships developed as part of the LRP was demonstrated in 2019 at the Vite Vite Rail Reserve. The small reserve, near Derrinallum, has high-value grasslands with records of the threatened striped legless lizard and of seven threatened flora species, including spiny rice flower and fragrant leek orchid. The reserve’s vegetation quality had been declining in recent years and it was in urgent need of management to prevent weed infestations.

Undertaking work on sites managed by rail authorities had previously been challenging as legislation requires on-site contractors to be supervised by an accredited Track Protection Officer, which has been cost prohibitive to the LRP. Through discussions with the Australian Rail and Track Corporation (ARTC) an agreement was reached which enabled safe and practical access to the site for approved LRP staff.

The first step of the Vite Vite site activities was to complete a site burn. CFA brigades from Lismore and Vite Vite coordinated a successful fuel reduction burn in May 2019. This resulted in a reduction of fuel load and weeds and an improvement in grassland vegetation quality. ARTC arranged and funded a fence to be constructed between the rail track and the grassland vegetation to allow the site to be accessed safely by weed control contractors. Contractors were engaged in spring 2019 to carry out follow up weed control.

The skill and effort of the CFA volunteers who participated in the fuel reduction burn should be noted, with a special mention of Chris and Val Lang, whose local knowledge and proactivity has led to this enhancement of native grasslands.

The Glenelg Hopkins CMA has been successful at recovering a critically endangered perennial daisy after a single surviving plant was discovered on a roadside at Caramut in south-west Victoria in 2019.

The button wrinklewort was only known to occur on nine roadside and rail reserve sites in the region. The Glenelg Hopkins CMA’s Button Wrinklewort Recovery Project team is made up of staff from Glenelg Hopkins CMA, ARI, La Trobe University, Monash University and a dedicated field naturalist from Ballarat. The team believed it had visited and collected leaf samples for genetic analysis from all known populations of this plant in south-west Victoria. However, in 2019 the team was alerted to a previously unknown individual plant on a roadside near Caramut.

Unable to cross-pollinate with itself, measurements from the base of the plant’s stem suggested it had been successfully living alone at the site for several years.

Over the spring of 2019, Aggie Stevenson and Ben Zeeman attempted to pollinate the daisy’s flowers by selecting flower heads from a larger button wrinklewort population at Wickliffe and manually cross-pollinating the flowers.

Aggie Stevenson is a Senior NRM Planner at Glenelg Hopkins CMA. Ammie Jackson is a Project Officer at DELWP. Jess Lill is a Biodiversity Project Manager at Corangamite CMA.

For more information on the Linear Reserves Project go to www.swifft.net.au/cb_pages/team_linear_reserves_project.php