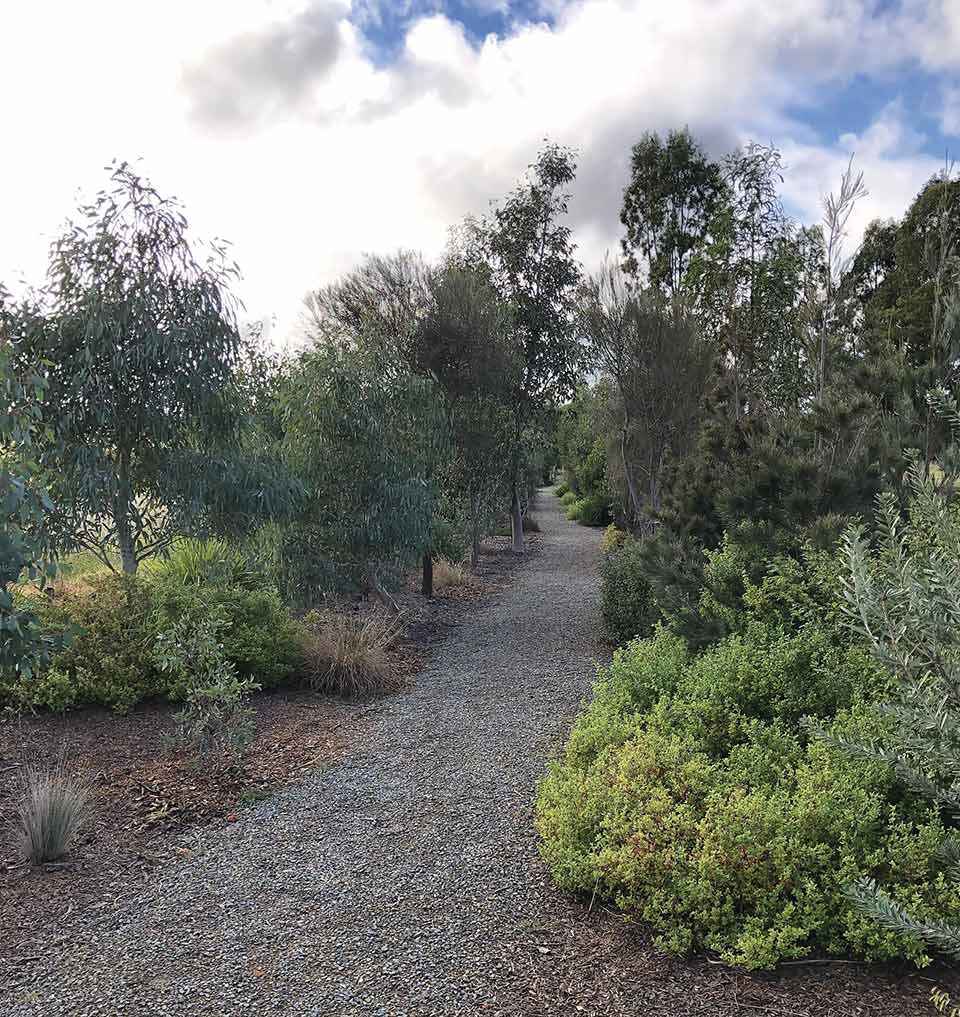 Above In July 2020 the bare paddock is now The Old Station Walk – an attractive walking track and wildlife corridor.

In 2016 the group got underway with a project to revegetate a bare Crown land paddock, originally part of the old Nicholson Railway Station grounds. The East Gippsland Rail Trail (EGRT) is adjacent to the south side of the paddock, with a new housing sub-division under development on its north border.

The aim was to provide a walking track and vegetation corridor between the housing subdivision and the EGRT Reserve and to connect Sarsfield Road with the Michael Oxer Reserve on the west bank of the Nicholson River, forming a walking loop to join the EGRT at the old Nicholson River railway trestle bridge.

The paddock had been grazed for many years and required minimal preparation work. A walking track was plotted out and a mixture of 2000 indigenous trees, understorey plants and Plains Grassy Forest grasses were planted and guarded to prevent damage from rabbits. More than 60 cubic metres of eucalypt mulch was spread in the small area for water retention and weed suppression. The walk was kept fenced off from the public to allow time for the plants to establish.

During this period, further clearing took place on the west end of the corridor with old fencing removed and some vegetation cut back to extend the walking track to the west bank of the Nicholson River and link up with the EGRT at the railway bridge.

For the final major works in 2018, a National Landcare Program Community Grant provided the funding to construct a fully graveled pathway, install entrance gates and signage, and more planting and mulching. A viewing seat overlooking the river was also installed at the western end of the walk.

By 2020 the original plantings of eucalypts, casuarinas, wattles and other indigenous flora had grown so strongly, despite drought conditions, that we had to prune overhanging vegetation to keep the walk clear for users.

Now that the trees and other plants are fully established, The Old Station Walk provides safe access and an additional route for residents in the three new subdivisions. The project has created significant new wildlife habitat and we are seeing an increase in birdlife in the area.

The Old Station Walk will make a long-term contribution to the growing village of Nicholson. The project demonstrates how the quality of Crown land can be creatively retained and enhanced, providing important community and environmental assets for the future.