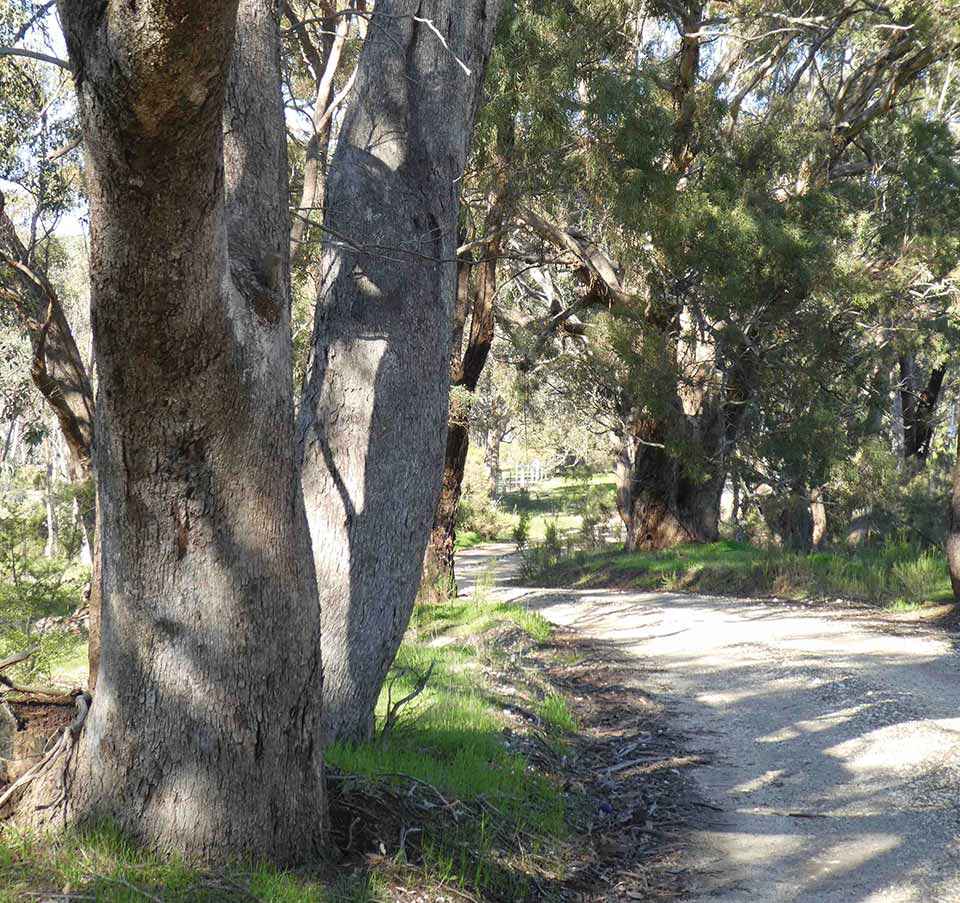 Above Forty-foot Lane, Maldon. The grey box at the left is estimated to be 200 years old, and behind 190 years old. The yellow box at the right has an estimated age of 320 years.

In 2017 the Maldon Urban Landcare Group (MULGA) set out to conduct a major survey of the indigenous eucalypts that have been growing in the area since before European settlement – pre 1852. We spent two years surveying 308 eucalypts on roadsides and private and public land.

Each tree was photographed and recorded by species, its diameter over bark at 1.3 metres and GPS location.

We calculated the age of the trees using an average growth rate of 3.5 millimetres a year across the trunk diameter for box-ironbark forest trees in the Maldon area that was used in a report completed for the Environment Conservation Council in 2001.

Our survey revealed an estimated age range of 170 to 545 years across the trees. We found that 87 per cent of the trees had an estimated age of 200 years or greater.  The tree data has been entered on the Victorian Biodiversity Atlas.

It is remarkable that these roadside eucalypts have survived. By 1854, during the goldrush, the Maldon population numbered 20,000. The landscape was turned up from mining and the forests were aggressively cleared. By 1890 the surrounding landscape was almost completely denuded of trees. All the roadsides we surveyed were active goldmining areas, so we don’t know why the trees were spared – perhaps to provide shade for people or horses.

MULGA is working to achieve long-term protection for these important eucalypts under the Mt Alexander Shire Council’s (MASC) Planning Scheme, and/or the National Trusts of Australia’s Register of Significant Trees.

It is rare to see a remnant eucalypt in the bushland and forests surrounding Maldon today. The narrow corridors of living treasures along the roadsides we surveyed are very significant and must have greater protection.

Bev Phillips is Secretary of MULGA.