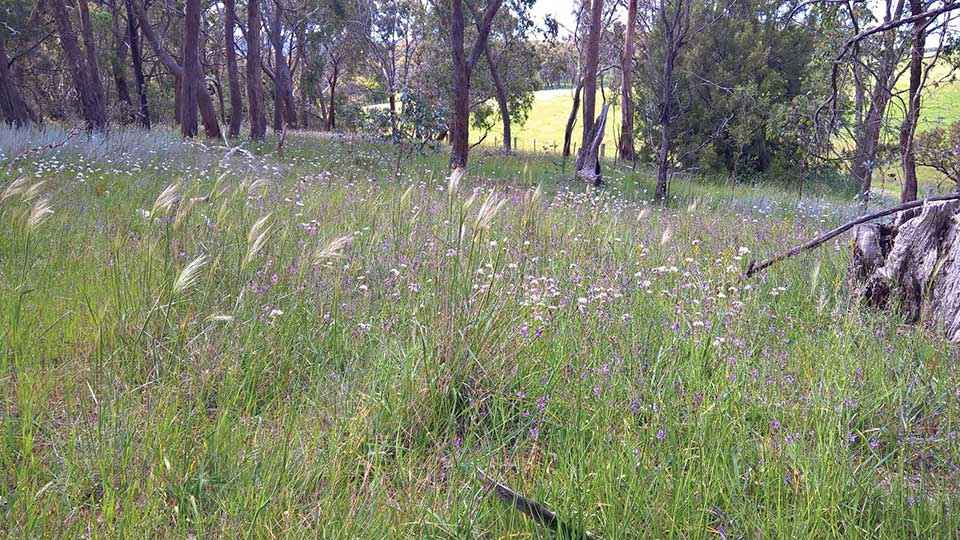 Above Wildflowers and native stipa grasses along a roadside in Newham.

Newham and District Landcare Group (NDLG) formed in 2004 with the aim of protecting and enhancing remnant vegetation and revegetating links between remnants. To date we have invested more than one million dollars in grants and matching contributions in the Cobaw Biolink, which will join the Macedon Regional Park with the Cobaw State Forest and beyond.

Newham and District Landcare Group (NDLG) formed in 2004 with the aim of protecting and enhancing remnant vegetation and revegetating links between remnants. To date we have invested more than one million dollars in grants and matching contributions in the Cobaw Biolink, which will join the Macedon Regional Park with the Cobaw State Forest and beyond.

The NDLG Roadside Management Group first met in 2005 with nine members. We decided to focus on weed management to improve landscape connectivity. We talked to the Macedon Ranges Shire Council’s (MRSC) Environment Officer, nominated priority roads, and began mapping weed infestations and entering this data on the MRSC database.

The group is known as the weedies. For the past 15 years we have organised working bees to cut and paint and pull roadside weeds – always capped off with morning tea. Meeting bi-monthly, our convenor records hours worked on roadside control, worth thousands of dollars at paid rates. We report on a monthly basis to NDLG.

The weedies have held many information and education sessions including workshops on indigenous plant propagation and grasslands, wildflower walks and local expos – often with guest speakers. We even have a song dedicated to us – The weedies lament.

We have identified gaps in policy, implementation and guidance on roadside conservation. In 2015, after concerns that roadside biodiversity was being compromised by the actions of landowners, MRSC staff and contractors, NDLG commissioned and funded ecological studies on local roadsides under threat.

The studies, and our constant communications with MRSC staff about poor practices, have yielded results. We have received grants, been alerted about forthcoming work and have an agreement to manage a particularly precious roadside.

In 2015 two of us presented a paper on rural roadsides to MRSC Councillors, and made a budget submission for a roadside management plan, unsuccessfully. We went on to organise an educational evening inviting people to re-visualise roadsides as a landscape web of indigenous flora and fauna. An MRSC officer and a research scientist member of NDLG spoke to more than 50 people in the Newham Hall followed by supper and a chance to view our displays and make suggestions. We were chuffed when the MRSC later featured roadsides in their Shire Life newsletter and produced a brochure, Maintaining our Roadsides – who does what?

Political action followed. Alice Aird and I helped initiate a Ranges Citizen for Open Government group, which, with the local Forum for Democratic Renewal, organised community campaigns for a more consultative Council. In 2016 we took our Federal and State Members of Parliament on a roadsides bus tour to demonstrate high-quality remnants and the damage they have been subject to. Other Landcare and environmental groups joined us at Newham Hall where we engaged the politicians in lively discussion.

Later that year we presented a paper on getting local government to lift its game on roadside management to 40 Landcare professionals at a forum run by the Victorian Landcare Council. We were delighted by loud applause, also to hear we were later described as bushrangers by Victorian Landcare Council member Ross Colliver in another presentation we did to the neighbouring Riddells Creek Landcare Group.

“Alice Aird and Helen Scott from over the hill, have been campaigning to get residents and the Shire to look after roadside vegetation. I think of them as bushrangers, a species of citizen scientist, out on the ground, keeping a look out for what’s happening, ringing bells and insisting that people think a lot harder about the impact they are having on this beautiful place we live in,” Ross said.

The decade of lobbying continued. We consulted with Regional Roads Victoria, attended Victorian Environmental Assessment Council (VEAC) community drop-ins, submitted to VEAC’s Central West investigation into public lands, and to Shire strategies, making sure that roadsides featured in all. In 2017 a MRSC Roadside Management Plan was at last announced. Several weedies have been invited to a focus group on the draft plan in 2020.

We continue to build on ever improving relationships with MRSC environmental officers and support them in communications with Council. We argue that significant roadsides have asset value and are worthy of investment in asset protection.

MRSC now has a roadsides page on its website and this year they invited us to partner in a federally funded Newham Roadside Biodiversity Monitoring Project. Results of 20 spotlight surveys of native fauna species using remnant biodiverse corridors on 10 roadsides will be uploaded to the Victorian Biodiversity Atlas. An educational brochure, community workshops and report are forthcoming.

What works and what next?

We believe persistence has been the key to our success. The weedies are a squeaky wheel, but we always use courtesy, document what we do and make sure we acknowledge achievement. Networking with other Landcare and environment groups has been important, as well as publicity via our website, newspaper and newsletter articles and displays at local events. Community education through well-organised events is crucial.

We have learned that it is when our emotions are stirred, we move into action. Love for the landscape and sadness at its destruction can overcome a sense of powerlessness. We want local people to become citizen scientists who are custodians of our rural roadsides. Encouraging people to keep a photographic diary of a favourite tiny wilderness can be both a scientific record and a work of art. We see a role for involving local artists, and filmmakers. The work of the weedies continues!

Helen Scott is Secretary of NDLG.

For more information on the weedies go to the rural roadsides page at www.newhamlandcare.info or email orseda@outlook.com

Read next article: A community bonds over The Poet’s Walk