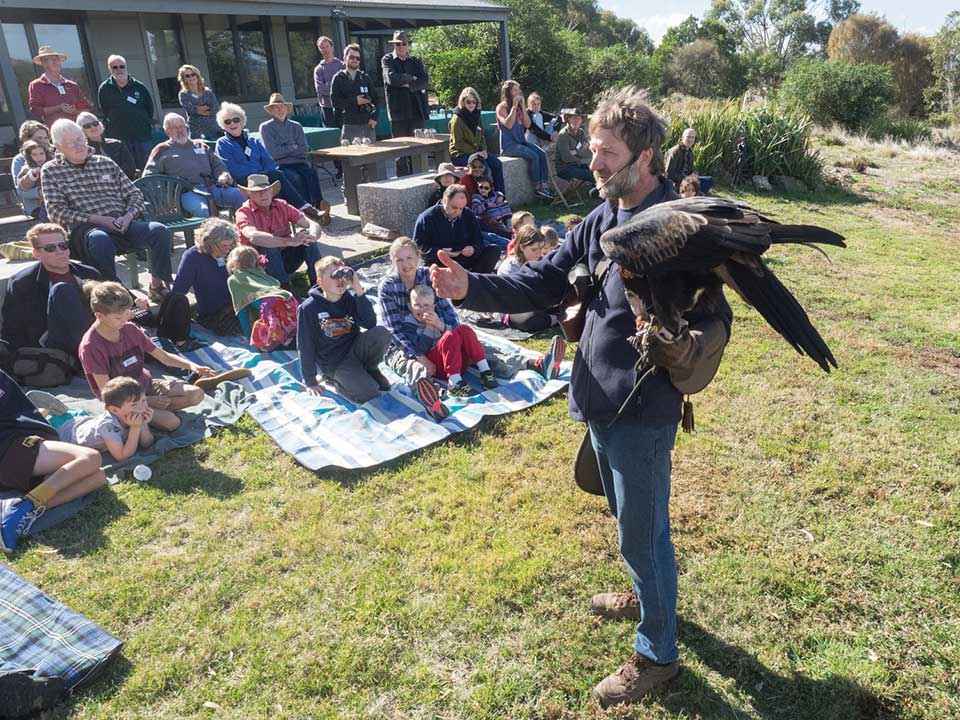 Above A raptor event organised by Newham and District Landcare Group in 2018 was a hit with young families.

The ACM Landcare Community Group Award acknowledges an outstanding community group that is improving sustainable land use through on-ground action to protect, enhance or restore the natural values of an area on behalf of the wider community.

Newham and District Landcare Group (NDLG) covers 21,800 hectares in the Newham, Cobaw, Hesket and Rochford areas. The group formed in 2004 with 40 members and now has more than 100 households involved – that’s 35 per cent of the district’s population. There has been a concerted effort to develop a sense of community through Landcare by running educational and social events that are inclusive and fun.

Since 2006 NDLG’s main project has been the Cobaw Biolink. The project encompasses pest plant and animal control, revegetation, rehabilitation of waterways, and roadside activities to provide habitat connectivity for native species on public and private land between Mount Macedon and the Cobaw State Forest.

NDLG has been successful in attracting more than $500,000 funding to support on ground works within the biolink area, with over $600,000 in a combination of matching in-kind and cash contributions. Works have been undertaken on 32 private properties, at Hanging Rock Reserve and along roadsides. Works include fencing to protect remnant vegetation, revegetation, control of rabbits and woody weeds, property planning activities, educational events, and production of a biolink poster.

More than 140,000 tubestock have been planted in the Cobaw Biolink with many of these provided by the Newham Primary School’s propagating group (run by NDLG).

Substantial fencing has also been completed to protect areas from grazing and allow them to be managed for conservation. Nesting boxes have been installed for brush-tailed phascogales, and members use a group owned motion-sensor camera to record wildlife on their properties.

In April 2021 the group released a video, to increase awareness among landholders and residents of the need to improve landscape connectivity along the biolink.

Long-term NDLG member Penny Roberts described each element of the biolink, no matter how big or small, as vitally important.

Helen Scott has been involved in the roadside management subgroup of NDLG since 2006. Known as ‘the weedies’ this team meets bi-monthly for working bees to cut and paint roadside weeds that they have recorded and mapped on the Macedon Ranges Shire’s database.

“Advocating for the importance of roadsides with high conservation values, highlighting habitat and the connectivity benefits of these roadsides, has been a major focus for us now for many years,” Helen said.

NDLG commissioned and funded a botanist to undertake roadside conservation surveys of 20 kilometres of significant roadside remnant vegetation in the district. Helen and the weedies have organised educational events and lobbied hard to get local government to lift its game in managing roadsides, and now successfully partner in the shire’s roadside projects.

NDLG also supports the Waterwatch program, runs roadside fauna spotlight evenings, Clean Up Australia Day activities, habitat assessment workshops, biochar demonstrations, and publicly advocates for the environment through submissions and the media. The group loans and hires equipment to members, operates a resource library for members and sends out a quarterly newsletter.

The executive meets monthly and despite the challenges of an ageing committee and recent COVID-19 restrictions, members are enthusiastic about the future of the environment and the community in their beautiful district.

The 30-member Friends of Lower Kororoit Creek (FOLKC) was formed in 2000 in recognition that the highly degraded and heavily polluted creek was potentially one of the most important waterways in Melbourne’s west.

The group formulated a plan to transform the creek. With advice and assistance from many partners including federal and state government agencies, local government, industry, local businesses, community groups and the local community, FOLKC set about planting along the lower reaches of the creek. FOLKC events have protected and promoted the waterway through recognition of its environmental, recreational, and historic values. FOLKC has also been instrumental in linking Hobsons Bay to the Metropolitan Shared Trail Network to showcase the Kororoit Creek environmental corridor. FOLKC attributes its success in returning a degraded waterway to a corridor of green to the commitment and dedication of its members.