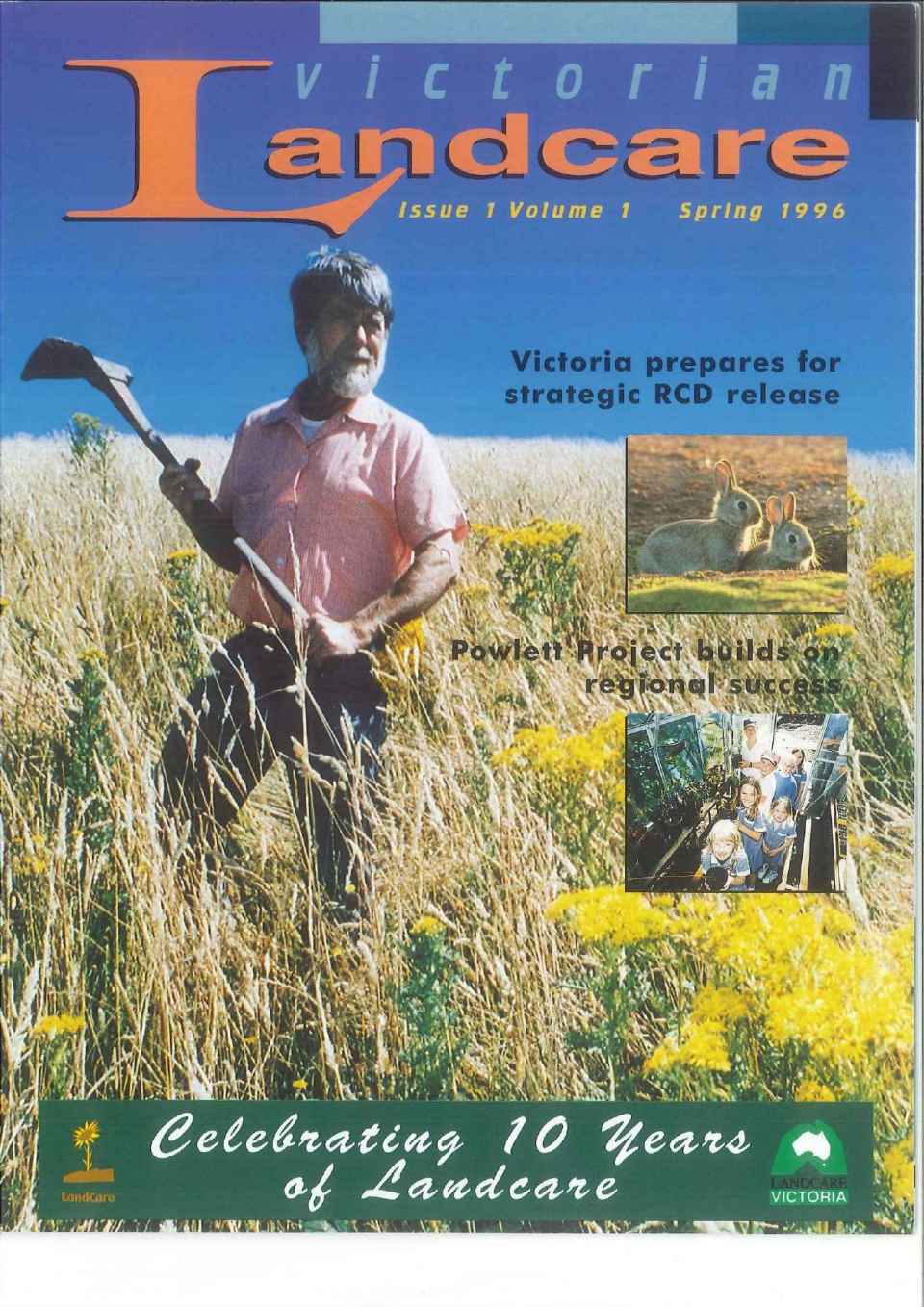 The first issue of the Victorian Landcare and Catchment Management magazine was published in 1996. In the spirit of Landcare, the editorial team was bringing together two earlier publications: Trunkline a VFF newsletter focused on farm trees, and the salinity journal Salt Force News.

The front cover of the first issue featured a picture of Barry Stewart from the Bass Valley Landcare Group attacking a stand of ragwort with a mattock. We reported proudly that it was 10 years since the birth of Landcare in Victoria in 1986, and there were more than 670 Landcare groups in the state (3000 nationally). David Clark gave a roundup on the 1996 Landcare conference held in Ballarat (I vividly remember near frostbite on a field trip to the Woady Yaloak catchment project), we marked the formation of the South Gippsland Landcare Network, got ready for the release of rabbit calicivirus, and reported on the activities of the then 10 Regional Catchment and Land Protection Boards.

We have now published 82 issues and have more than 22,000 readers – many of them online. The magazine has shifted focus from recording and promoting the successes of individual groups (most have their own newsletters and network publications) to more in-depth reporting on the environmental, social, and structural challenges Landcare is facing. Through many iterations of its editorial committee, the magazine has provided a constant voice for community Landcare to promote best practice in natural resource management.

The spirit of the magazine has always reflected the spirit of Landcare – a grassroots, community-led movement. To that end we work with groups and individuals to publish their stories and pictures rather than reprinting press releases. We encourage our contributors to share not only their successes, but their challenges and failures so we can continue to learn from each other.

It has been a privilege to work with so many of Victoria’s Landcarers to help them hone their stories for publication. Some timorous early contributors have gone on to produce their own newsletters and have even written and published books about Landcare.

A searchable index of the magazine’s stories available on the Victorian Landcare Gateway (www.landcarevic.org.au/landcare-magazine/) runs to more than 180 pages. Many of the stories first published in the magazine have been reprinted in other publications in Australia and overseas. Our most reprinted story, ‘Shelterbelts for fire protection’ by Rod Bird was published in issue 49, a special feature after the 2009 bushfires.

Reader surveys have helped us to keep the magazine on track and make sure we are meeting the needs of our readers. We also collate the feedback we receive on each issue and incorporate suggestions into future issues. Don’t hesitate to get in touch if you have any ideas.

As editor of the magazine since the first issue, one of my most prized letters is from Landcare’s founder, the Honourable Joan Kirner AC. Joan wrote not long before she died in 2015 to say she was continuing to read the magazine and that Landcare was one of her proudest achievements.