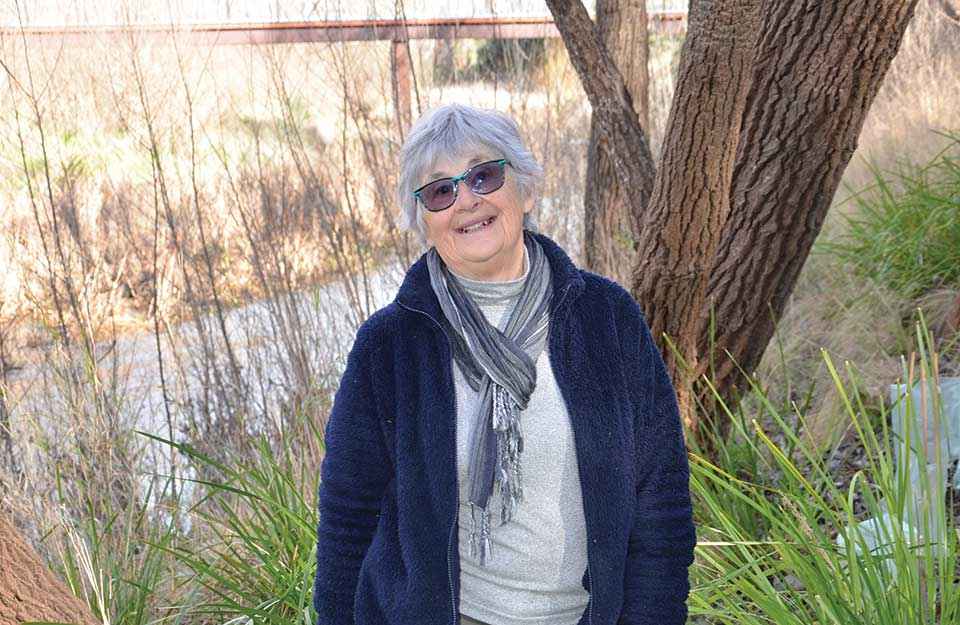 Above June Johnstone at a working bee along the Creswick Creek at Clunes.

This award is made to a group, network, or individual who has delivered Landcare projects or initiatives that have inspired and involved an urban population.

June Johnstone lives in the gold rush town of Clunes. Her home and the B&B she ran were badly affected by floods in 2010 and 2011. June had always been interested in Landcare, but the flood events inspired June and six other residents to get together with the aim of rehabilitating the section of Creswick Creek that runs through the township. The creek was choked with poplars and elms and the floods had destroyed the walkways and footbridge.

The small group was overwhelmed by the scale of the task and complex issues around what to plant as many locals liked the look of the existing elms and poplars. A public meeting was called in 2013 to attract more people and more funding for the project and the Clunes Landcare & Waterways Group (CL&WG) began with 23 members.

June organised an early brainstorming session which identified that everyone in the town loved the creek’s platypus. This led to a platypus weekend with the town’s primary school children participating in a platypus art show and public walks and talks led by Geoff Williams from the Australian Platypus Conservancy. As soon as everyone understood how important indigenous plants are to platypus habitat objections to the choice of plants for revegetation works ceased.

The following year a frogtember event was also well attended with locals learning about the value of frogs as indicators of waterway health. June and the group have put a lot of effort into educating the Clunes community about local biodiversity. There’s now a strong sense of ownership of the creek and its surrounds. Thousands of plants have been established and people who are not members of the group often remove rubbish and report any issues. A spotlight walk will be held once the weather is warmer so that the local community can learn more about the insects, birds and bats that live in the heart of their town.

June is described by her fellow group members as a canny operator. She has a strong sense of the strengths of others around her and likes to lead by encouraging. She has been the president of the group through most of this period and has honed her skills as an expert negotiator.

CL&WG has established positive working partnerships with many other community groups including the angling club, local bowling and football club, primary school, the Clunes campus of Wesley College, the neighbourhood house, and the arts community, which co-hosted a native grasslands project. She has also developed excellent relationships between the group and DELWP, Hepburn Shire and the North Central CMA.

The major challenge over the years has been dealing with a variety of land managers. With June’s encouragement a local environmental planner mapped the site and outlined the strategies for revegetation works along the creek. This demonstrated to the various managers the dedication of the group to the project.

June says she is inspired by the changes to the landscape over the last eight years.

“I believe in little-by-little. I’m very persistent and I don’t give up easily. If every person just does a small amount we can achieve a great deal. Keeping the creek healthy for flora and fauna is its own reward, as is seeing people inspired to plant native species in their gardens as well as the exotics,” June said.

When visitors come to Clunes, they are likely to bump into a local keen to describe the endangered local growling grass frogs and take them to view the beloved platypus. Much of this is thanks to the vision, enthusiasm and dedication of June Johnstone.

In the last three years Matthew Odgers and fellow volunteers from the Links Community Group have transformed a disused area next to the rail reserve in Lalor into a thriving community space dedicated to sustainable food production, conservation advocacy, biodiversity learning and on-ground action.

Matthew’s work with Links Community Group has strengthened the bonds between diverse urban community members as they work together to create a dynamic, welcoming, and accessible space for connecting, learning, and valuing nature.