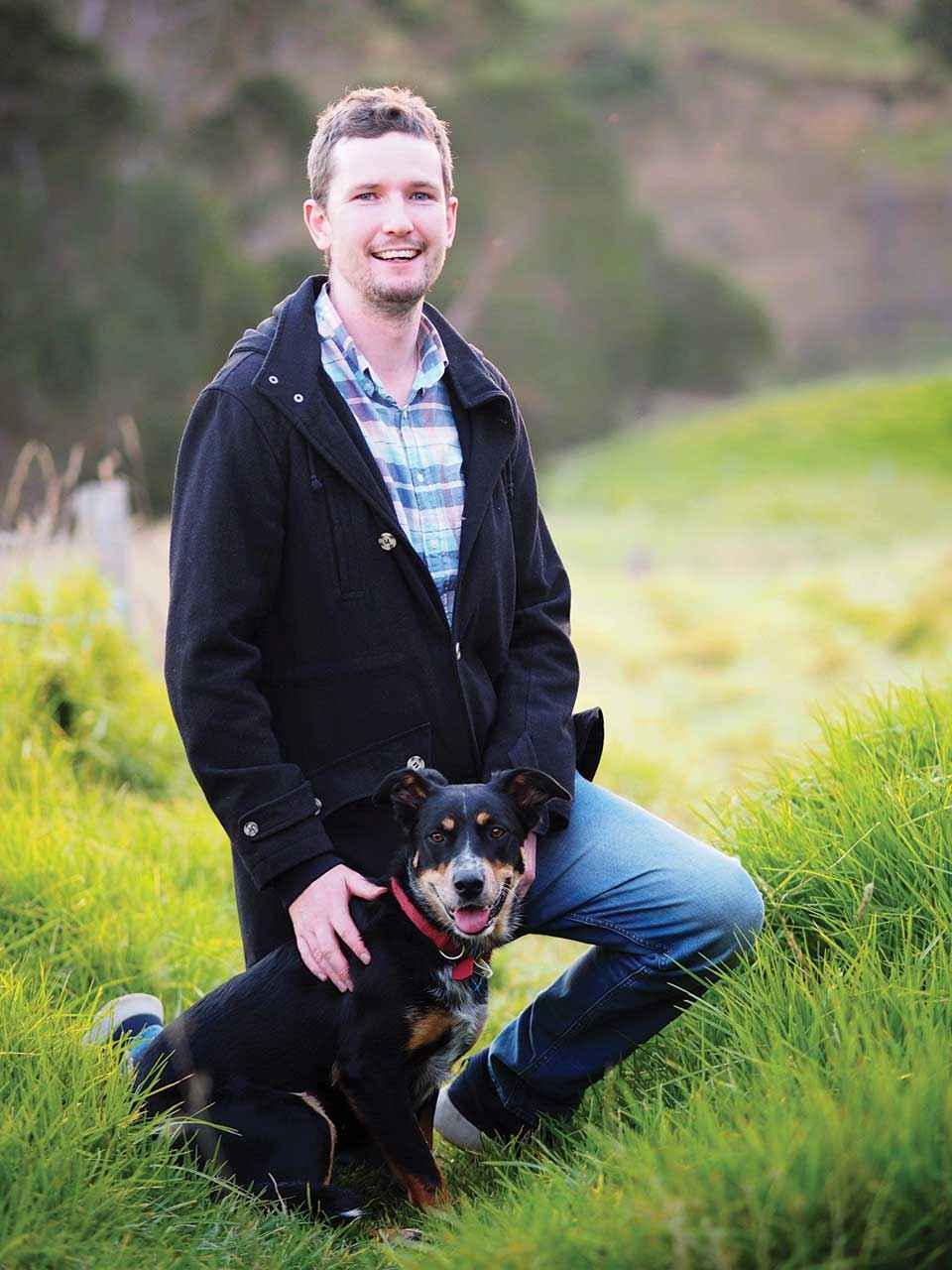 Above Scott Elliott with his kelpie Luna on his farm near Yarram.

Scott Elliott is a second-generation Landcarer. Scott cut his teeth as a boy assisting the facilitator of the Natte Yallock Landcare Group – his father Russell Elliott – one of  the first Landcare facilitators in the world.

“I spent my childhood helping Dad plant trees, build fences, search for rare orchids and do Waterwatch testing. My brother joked I was going to end up as a Landcare facilitator and in truth I’ve never wanted to be anything else,” Scott said.

Scott moved to Gippsland where he was Landcare facilitator of the Yarram Yarram Landcare Network (YYLN). He oversaw nine Landcare groups and the broader network of more than 120 families. His days in the role were busy developing the Corner Inlet Broadleaf Seagrass Restoration Project – a partnership between Landcare, researchers, dairy farmers and professional fishers to restore 200 hectares of broadleaf seagrass by 2030. Each hectare of seagrass that is restored provides around $35,000 of ecosystem services per annum in terms of nutrient cycling, carbon sequestration and habitat for commercial fish species.

Importantly, seagrass restoration activities have led to an improvement in the character of the Corner Inlet-Nooramunga Marine and Coastal Park, a Ramsar-listed wetland. The project was recognised by the Victorian Government in 2020 when it won the Marine and Coastal Council Award for Distinction in Biodiversity and Ecosystem Conservation.

Scott was immersed in this project from 2018 to 2021: writing successful grant applications, recruiting academic staff, reporting, managing budgets, coordinating risk management, and even developing a new technique for seagrass restoration that has garnered international attention. He attracted more than $800,000 in funding for a diverse range of terrestrial and marine projects.

Scott’s land-based projects included developing a new approach to soil carbon capture using the Soilkee Renovator implement to plant multi-species cover crops on farms. Scott worked closely with the West Gippsland CMA to trial this new technology with the aim of increasing drought resilience in farming enterprises in the coastal plain region of the YYLN.

In 2020 Scott worked closely with consultants to develop two case studies for a cost-benefit analysis of Landcare’s contribution to the local community. In 2019 Scott hosted mental health first aid training for Landcare members to help with identifying and seeking assistance for mental health crises in farming communities. These workshops coincided with the rebuilding process from the recent drought in the region.

When he’s not at work Scott lives on a 12-hectare property near Yarram where he spends his weekends planting trees, spraying woody weeds, installing nest boxes for birds, and fencing sensitive areas from stock. The property is part of BirdLife Australia’s Birds on Farms program.

Scott is an active member of the local Albert River Landcare Group and was a professional Landcarer delegate on the board of Landcare Victoria Incorporated. In September 2021 Scott gave a (virtual) presentation at the World Fisheries Congress on restoring Corner Inlet’s seagrass meadows.

Scott will use the fellowship to assist him in obtaining a scientific scuba diving qualification and a coxswain commercial boat driving accreditation.

“These courses will provide me with the expert qualifications to guide future seagrass restoration projects. Heading underwater with scuba will allow us to target important seagrass species using a technique perfected by the University of Western Australia to translocate rhizomes from existing seagrass meadows,” Scott said.

The groups are an important part of the social fabric of these small rural communities. Marissa has worked tirelessly on many local projects including the Flora and Fauna survey at Uttiwillock Wetlands, Nullawil, large-scale rabbit control works, revegetation, and conservation projects with schools.