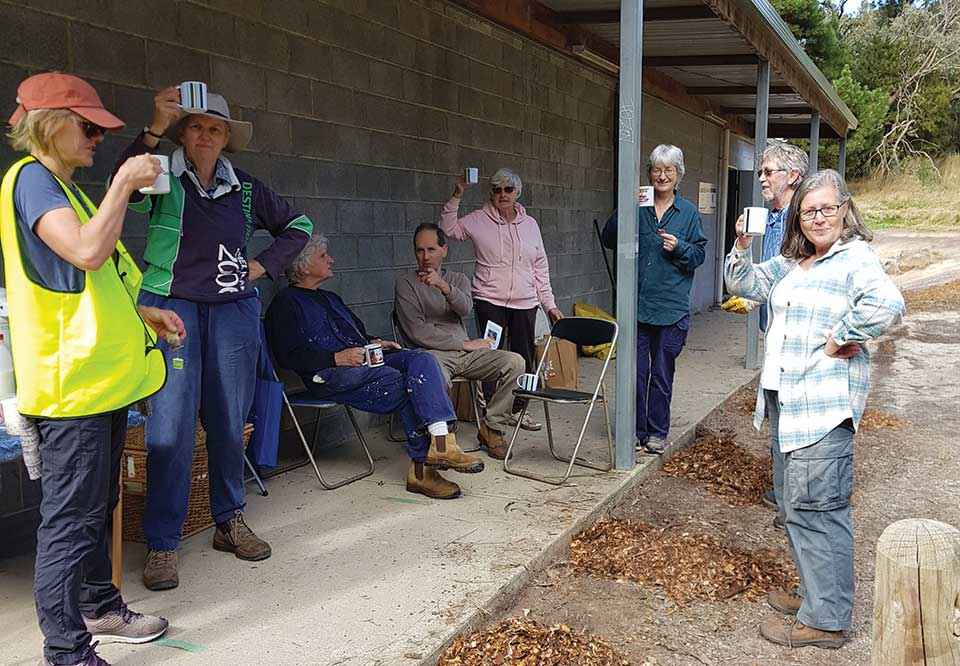 Above Friends of Daly Nature Reserve enjoy a recuperating tea break and chat during a recent mulching working bee.

UL Daly Nature Reserve is a four-hectare bushland reserve close to the centre of Gisborne. The reserve is named after Ulick Lord Daly, the last European owner of the land before it was transferred into the care of Macedon Ranges Shire Council. The Friends of Daly Nature Reserve acknowledge the Wurundjeri Woi-wurrung peoples as the traditional custodians.

The reserve’s natural bushland displays colourful flora, especially during spring, below a canopy of mainly acacias and eucalypts and offers beautiful views to the Macedon Ranges. The early 1900’s kitchen garden features 100-year-old fruit trees, giving a glimpse into early European use of the site.

It is not uncommon to encounter kangaroos grazing in the reserve, and many locals walk the tracks, but the Friends group were keen to encourage the younger generation to visit so they could appreciate its historic and environmental values.

We came up with the idea of organising guided nature walks for year 3 students from the nearby Gisborne Primary School.

We ran the first walk in the spring of 2018 with an average of 75 students attending. The students asked questions about moss, mushrooms, spiders, anthills and the many natural processes they were witnessing. They learned to befriend the local magpies, heard the call of the kookaburra, and observed that cockatoos are left-handed.

During the spring walks they identified many species including native orchids, lilies, acacias and eucalypts. They saw the strange fruits of cherry ballart, and the tell-tale shape of leaves on the kangaroo apple. We, the Friends group, had to answer some pretty tricky questions from the enthusiastic youngsters.

In 2021 a cool burn was conducted in Daly Nature Reserve by the Wurundjeri Woi-Wurrung Cultural Heritage Aboriginal Corporation’s Narrap Team. The students rambled through the charred remains looking for new signs of life, which were plentiful. On another occasion they were down on their hands and knees looking closely at carnivorous sundews and spotting the insects the plants had caught.

We carry litter bags on the walks to pass on the lesson of the dangers of plastic and foil wrappers to wildlife. The children, with their keen eyes, find tiny items hidden in the grass and are delighted in filling the bags.

Our spring and autumn walks have become an established part of the school calendar and we have been fortunate in managing to avoid COVID-19 lockdowns. Our original year 3 students are now in secondary school, and we hope we have contributed in a small way towards their understanding of the environment around them.