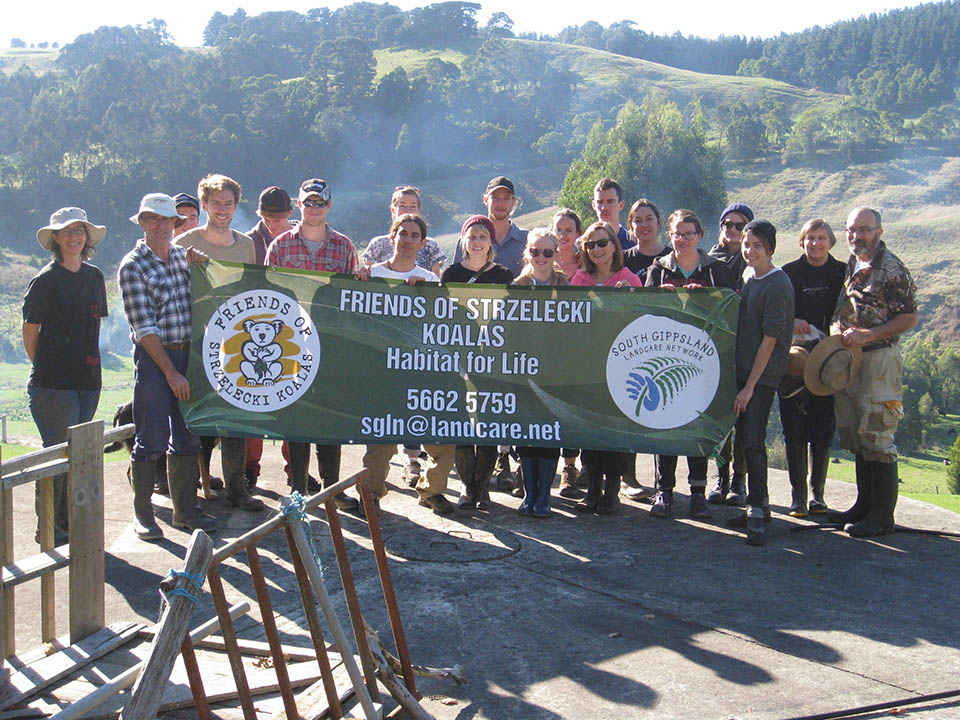 Above Volunteers hold up the FOSK banner at Geoff and Donna Russell’s planting day at Hallston in 2014.

Koalas were once widespread across Victoria but declined to near extinction in the early 1920s due to hunting for the fur trade, land clearing and massive bushfires. In order to combat this decline Koalas from colonies established on French and Phillip Islands were moved across the state.

These translocated Koalas have genetically swamped most of the remaining Koala population in Victoria, with the exception of the Strzelecki Ranges where small surviving colonies of naturally occurring Koalas remained.

Genetic diversity is important for species to adapt to environmental change and disease. The Koala population in the Strzelecki Ranges potentially represents a unique remnant gene pool that may be the key to supporting and rebuilding Victoria’s Koala populations in the future.

In recognition of its conservation significance the Victorian Government, through its Communities for Nature Program, provided funding to the South Gippsland Landcare Network (SGLN) for the Friends of Strzelecki Koala (FOSK) – Habitat for Life Project 2012-16.

Over the last four years SGLN has worked to identify suitable Koala habitat on private and public land; engage with landholders to protect and improve the condition of Koala habitat through fencing and weed control; create native vegetation corridors to improve habitat connectivity across the StrzeleckiRanges and South Gippsland region; and to engage with the broader community to increase awareness and understanding of Koala conservation.

Landholders Geoff and Donna Russell from Hallston undertook two plantings with the FOSK project in 2014 and 2015.

“The project involved fencing two gullies that stretched nearly the full length of our property to keep the cattle out of the waterways. The plantings connected to the west branch of the Tarwin River, which was planted out about ten years ago by Gippsland Water,” Geoff said.

“The plants have gone very well, we had very few that did not survive, most have flourished. We’ve also had many comments about how good the gullies now look from the other side of the valley. We can’t wait for the trees to get to a size that will support Koalas. We had a great group of people for both plantings including some university students doing environmental studies. They were a terrific group and very enthusiastic,” Geoff said.

The support of the local community for the local Koala population was considered an important part of the project. There was already a high level of interest and concern for the welfare of Koalas in the Strzelecki Ranges and various community activities and events helped to reinforce this.

Getting the message out to the community was achieved through a dedicated FOSK website, Facebook page, a quarterly newsletter to supporters, community forums, field days, community planting days, school visits, training sessions and local newspaper articles.

Various publications and resources have been produced including education material for schools, landholder case studies, an identification guide to the Eucalypts of the Strzelecki Ranges and Gippsland Plains and a brochure called Living with Koalas in the Strzelecki Ranges which looks at ways that people on bush blocks on the edge of built up areas can co-exist with Koalas.

Another key component of the FOSK project was a Citizen Ecologist Program. This involved the community in collecting data on the local Koala population. A Koala sighting map was launched which allowed people to record Koala sightings in the South Gippsland region on a dedicated website.

Volunteers were recruited through radio, flyers, Facebook, the local Landcare network and the FOSK supporters group. All sorts of people got involved including students, landholders and community members. Their motivation was a genuine desire to learn more about the Koala population and what habitat is needed to support the species.

Volunteers were trained in how to collect Koala scats and submit them for genetic analysis. This has assisted in developing a genetic profile for the Koala in the Strzelecki Ranges. More than 200 scat samples were collected.

Volunteers were also trained to undertake Koala distribution and habitat preference surveys. These surveys form an important baseline on the extent and condition of Koala habitat across the region. The data from the surveys has been used to develop a Koala habitat model. The model allows regional authorities and community groups to generate maps at a local scale on which to base their on-ground priorities. We hope the model and maps will assist local government when assessing planning and development applications in areas used by Koalas.

Volunteers Marijke and Richard Price from the Jindivick Landcare Group participated in the habitat surveys at Morwell and Wilsons Promontory National Parks.

According to Marijke the survey team leader immediately made them feel valued.

“We connected on a level of common understanding and positive rapport and were made to feel part of the team rather than being led by the team.

“At Morwell National Park our task involved establishing the population and activity levels of Koalas in a specific area in order to compile a population estimate for management purposes. Richard and I enjoyed the camaraderie as well as the opportunity to learn the process and know the significance of this knowledge.

“We look forward to the possibility of participating in similar research in the future,” Marijke said.

FOSK has achieved a great deal for the Koala in the Strzelecki Ranges as well as having a community strengthening impact throughout the region. The desire to protect this important population of native animals has sparked a broader desire among people to nurture the environment and through doing so we nurture each other.

Nicole Walsh is a former project officer for the South Gippsland Landcare Network.