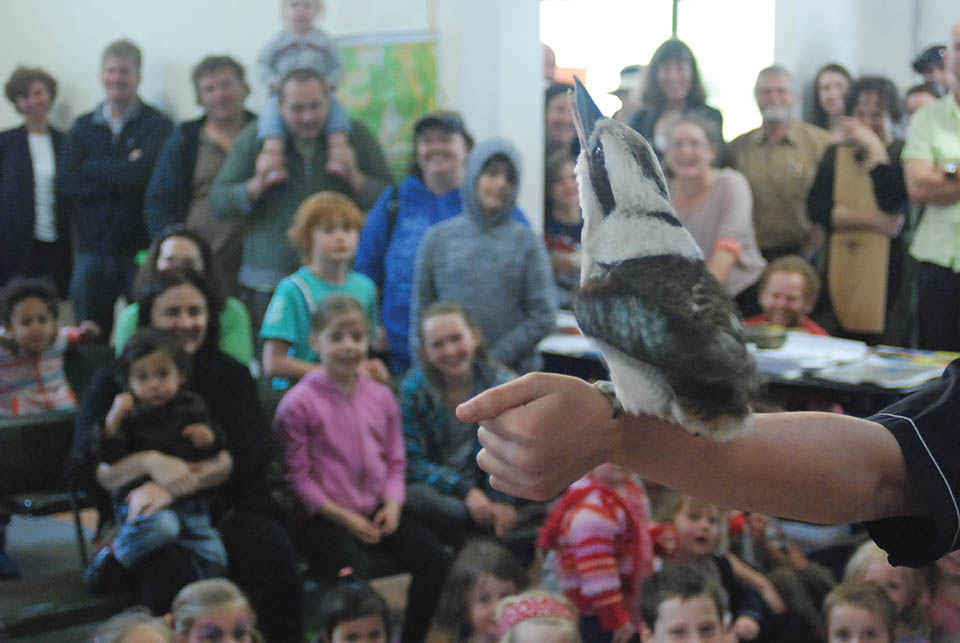 Above Cackles the kookaburra was a hit at the local primary school’s spring fair.

The Christmas Hills area is rich in flora and fauna. Large areas of remnant woodlands and forests occur on private land, with several rare and threatened species using this vegetation as habitat.

Establishing connections between landholders and the local flora and fauna has been a core objective for the Christmas Hills Landcare Group (CHLG). The group sees these positive experiences and connections as the first stage in engaging landholders to take action to care for their local environment.

Animals are an attraction

We have used a number of different methods with varying degrees of success. Our first attempt to use animals to attract a crowd was in 2012 when we arranged for the Wild Action Zoo to bring a selection of native animals to the local primary school spring fair. We requested as many locally occurring species as possible.

We’d also arranged for a local ecologist to give a presentation on the importance of wildlife habitat in Christmas Hills, and then a talk from the group on how we help landholders to look after this habitat.

The event ran inside the school hall. The animals were a hit. The hall was packed with more than 140 people (many were school-aged children). The crowd was thrilled with the parade of kangaroos, koalas, wombats, kookaburras, Masked Owls, Lace Monitors and blue-tongue lizards. Several delighted children were selected from the crowd to come up and hold and touch an animal on show.

However, with food and other spring fair attractions outside, the numbers quickly dropped for the talk by the ecologist, and for the group’s presentation we had 15 people in the audience – all of them already members! So we missed an opportunity to get our message to a wider audience.

In 2014 we engaged Blacksnake Productions to bring a selection of snakes and lizards, with as many local species as possible, to an end-of-year event for our members held at a private house. The animal presenter was also asked to provide advice on what landholders can do to care for reptile habitat on their properties.

This time the message was successfully delivered. We had more than 30 people in attendance with a good selection of young people. We asked the young people why they had come and it was because of the snakes.

In 2015 we engaged Full Flight Conservation Centre to provide a flight display of birds of prey. By sandwiching our annual general meeting between an expert guest speaker on birds of prey and the bird display, we had more than 60 people stay for the meeting. They all received a copy of our annual report, reflected on the health of the group, decided on the program of events for the coming year and saw the management committee re-elected. More than 90 people watched the birds of prey show.

Establishing connections between landholders and the local flora and fauna has been a core objective for the Christmas Hills Landcare Group.

Cameras reveal the hard to see

Since 2011 the CHLG has been making motion-sensing infrared cameras available to landholders. We provide instructions on how to use the cameras and where to place them to detect native fauna. Initially the cameras captured still images, but since 2013 they have been set up to take short videos. Landholders from more than 40 different properties have participated, and the majority continue to be involved.

We present a selection of the better videos that show what animals were seen as part of our end-of-year event. The Brush-tailed Phascogale is a small carnivorous marsupial that occurs in Christmas Hills, but as it is nocturnal it is not often seen. This Flora and Fauna Guarantee Act 1988 listed species has now been captured on motion-sensing cameras on 26 different properties and all of the members of the CHLG can now readily recognise a Brush-tailed Phascogale if they see one.

When landholders were offered the opportunity to have nest boxes specifically suited to phascogales installed on their property the response was strong. More than 80 nest boxes have been installed on 25 different properties in Christmas Hills.

The Slender-tailed Dunnart was first detected by one of the cameras in 2014 and has been reliably captured at four different properties since. Artificial habitat for dunnarts in the form of concrete pavers and ground-mounted nest boxes have since been installed on 22 different properties in an effort to retain and grow this small local population.

Late in 2015 CHLG member and regular camera user, Phil Styles, caught a fleeting glimpse of a small animal that had been disturbed from a thick shrub in his garden. The animal was unfamiliar to Phil and he tried to get some photographs of it on his mobile phone. The photographs were inconclusive but there was some hope he may have uncovered the tiny and rarely seen Eastern Pygmy Possum.

A few months later, as part of another CHLG project, the stomach contents of a fox trapped on a property less then two kilometres away contained the hairs of an Eastern Pygmy Possum. This information was shared with the wider group at the 2016 annual general meeting.

A camera was set up in the banksia shrubs in Phil Styles’s garden and we were able to confirm that his original sighting was an Eastern Pygmy Possum. Some of the footage now features on YouTube.

Phil has been delighted to be involved in the motion-sensing camera project.

“I love the images we get. We had more than 300 videos from the camera among the banksias – rats, rabbits, cats, dogs, gardeners – and then finally a little creature appeared on the screen that we had been hoping for. I have rarely felt so much pleasure,” Phil said.

Phil has since borrowed a cat trap from the local council to remove that threat to his resident pygmy possum. The owners of 21 properties at Christmas Hills are now about to set up and monitor nest boxes designed to suit Eastern Pygmy Possums on their property.