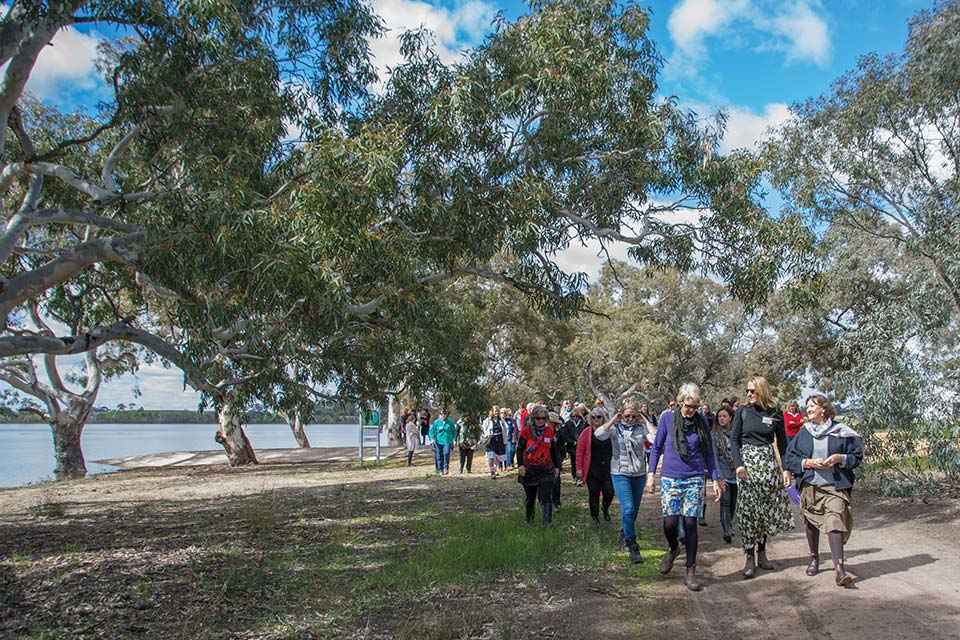 Above Avon Plains-Banyena Landcare members lead a Chicks in the Sticks tour around Walkers Lake.

The 2017 Chicks in the Sticks event hosted with Avon Plains-Banyena Landcare Group and Project Platypus, was a resounding success.

More than 70 women gathered along the banks of Walkers Lake to enjoy the cultural and natural values of the lake, a key site for the local Landcare group. After walking the lake’s perimeter in gumboots and dresses, the women heard from speakers Alicia Cain and Melissa Connors. This annual event continues to grow and make connections for Landcare in the region.

Reporting from the 2016-17 Community Grants program has provided insight into the diversity of activity and approaches Landcare groups and networks are implementing across the catchment. The projects ranged from endangered aquatic wetland herb plantings to squirrel glider breeding and nest box building. The Landcare community deserves credit for its commitment to grant submissions and project management.

Leigh Catchment Group celebrated 20 years of operation in November 2017. More than 100 community members enjoyed a walk through a 1997 reclamation site showcasing what can be achieved by setting goals, planning and working together. The evening included a presentation by Rob Youl on Landcare’s future pathways.

After three years of work by local community and environment groups, the Discover the real Ocean Grove publication celebrates the location’s woodlands, wetlands, coast and estuary environments. The publication is an initiative of the Bellarine Catchment Network.

2018 will be very busy for Landcare with 15 on-ground projects and 28 support grants that have been funded by the Victorian Landcare Grants program. Planning and project development for National Landcare Program initiatives has also been a big focus for the region.

The Far East Victoria Landcare Network has developed a pollinator’s calendar highlighting local species that produce pollen and nectar and when to plant them. More than 250 people attended a Healthy Bees Healthy People field day held at Bruthen in October 2017 where the calendar was launched.

The East Gippsland Women in Agriculture Group held several events throughout the region.  More than 30 women gathered at a Tambo Valley property in November 2017 to address topics such as succession planning, mental health and the challenges of working off farm.

Landcare groups are busy planning for their 2018 community projects. It is inspiring to see the work of our dedicated volunteers in the region.

The region was busy with many Landcare field days and workshops over the summer. South Gippsland Landcare Network joined forces with Bass Coast Landcare Network to run a workshop on healthy soils, nutritional food and healthy people at Inverloch. Presentations focused on the importance of producing and eating high quality food that is sustainably produced with minimum impact on the environment.

Yarram Yarram Landcare Network hosted a successful Jack and Albert River Restoration tour that followed the catchment from the headwaters to the salt marsh.

We farewell Bronwyn Bant and welcome Loki McIntyre to the role of Upper Wimmera Regional Landcare Facilitator. Loki will be working with Ray Zippel from the northern Wimmera and Lisa Oliver from the west Wimmera.

A 2018 Trees of the Wimmera calendar using photographs from last year’s competition has been produced. The calendars have been circulated to groups and can also be obtained through your local Landcare facilitator or from the CMA.

Landcare will support the Wimmera Machinery Field Days on 6–8 March 2018. Chris Humfrey’s Wild Action Zoo will be at the Horsham Fishing Competition on 11 March 2018. A Harmony Day event with Tim Low and Barengi Gadjin Land Council will be held at  Horsham Town Hall on 21 March 2018.

The region had a great result with funding from the Victorian Government Biodiversity On-ground Action program with lots of successful projects. Our networks are continuing to deliver quality projects such as Gecko CLaN soil moisture and water technology trials.

In November 2017, the region hosted a visit from the Federal Assistant Minister for Agriculture Luke Hartsuyker. Goulburn Murray Landcare Network and Regional Landcare Facilitator Ash Rogers demonstrated the benefits of the holistic farming and partnership work that they have been undertaking in the Shepparton region.

Landcare and other community groups in the region worked in partnership with the CMA to develop a wide range of applications for the National Landcare Program Smart Farms Grants during November 2017.

The Greta Valley Landcare Group released the Caring for Your Rural Property guide. This practical guide is aimed at improving the health and productivity of land. Funding was provided through the National Landcare Program and local partners. Go to www.gretalandcare.org.au

Swamps Rivers and Ranges, a community-driven landscape restoration project based in the north east has released a Nest Box Guide that was produced with funding from the Norman Wettenhall Foundation. This guide provides nest box best practice design, placement, maintenance and monitoring advice for a range of key species. Go to www.swampsriversandranges.org

Thank you to all the groups and networks that completed the annual Landcare survey – the data provided has been used to compile the 2016-17 Landcare Report Card that is now available on the CMA website.

Congratulations to the 18 groups that were awarded Victorian Landcare Grants for a range of on-ground projects and capacity building activities in the region.

The Hamilton to Coleraine Rail Reserve Committee has continued with development of the rail trail. The group held a recent celebration with the Coleraine community to mark the opening of the western end of the trail.

The Gazette Land Action Group engaged a facilitator to conduct a recent planning day that helped to produce a useful document to guide the group’s activities into the future.

The 2017 season was a challenge for Landcare in the region. Large stubble loads and reasonable sub-soil moisture left behind from 2016 promised a good follow-up season, however mice numbers were high early in the season which required some growers to re-sow crops. Paddock baiting occurred in some areas.

Early rains provided a good start, but the rain in September and October 2017 was limited and widespread frost coupled with hot winds impacted flowering crops causing below average yields. Alternative crops such as peas, lentils, lupins and canola have also had disappointing yields and poor returns. Some growers managed to finish harvesting before the early summer rain but many didn’t, which further decreased the value of crops.

A number of Landcare groups took advantage of the early rains and built on revegetation linkage corridor projects, as well as weed and rabbit control
projects.

Jackson Chatfield has recently taken on the role of state-wide Aboriginal Landcare Facilitator based at DELWP in East Melbourne.

Jackson previously worked with Court Services Victoria where he focussed on creating partnerships to provide better pathways for Aboriginal people who found themselves at risk and in contact with the justice system.

Jackson is excited to join the Victorian Landcare Team and is looking forward to the opportunity of working with Traditional Owners, Aboriginal communities and the Landcare community.