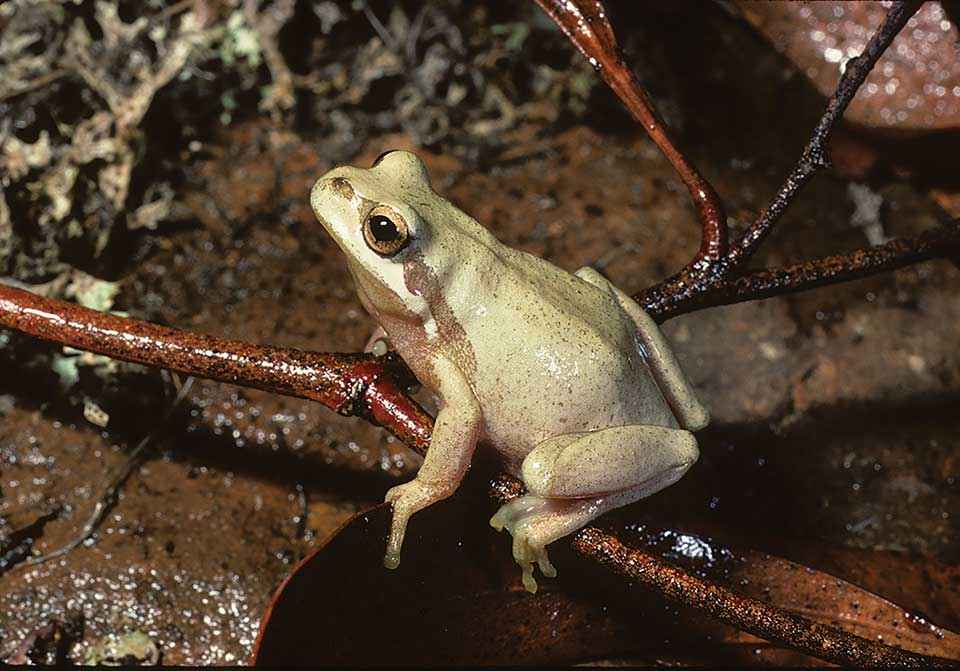 The greater Melbourne region is home to 16 recorded frog species, of which three are currently listed as threatened. These are grim statistics, especially when frogs provide a number of important ecological functions.

Frogs are a key link supporting waterway food chains, as they are both predator and prey. Tadpoles browse on algae and transfer energy up the food chain as they, (and adult frogs), are preyed upon by predators such as waterbirds. Adult frogs are voracious predators of invertebrate populations, providing a free organic form of pest control.

Frogs also possess a complex set of chemical compounds in their bodies that have many novel scientific and medical applications from potential painkillers to antibiotics and gastric ulcer treatments. When we lose frog species, we lose the opportunity to discover and develop substances of benefit to the health needs of humankind.

Frog populations face many threats, including habitat loss and modification, disease, introduced species, drought and climate change. Fortunately, there are many practical actions we can take to help conserve frog populations.

Frogs have a water-dependent life cycle and sensitive skins (they can breathe and drink through their skin), so the state of frog populations can tell us a lot about the wider health of waterways. Trends in frog populations can provide an early warning indicator of stresses such as waterway pollution, drought and the condition of other elements of food chains.

Since 2001 Melbourne Water has run a Frog Census, working with the community to monitor frog populations by recording frog calls.

In September 2016, Melbourne Water launched a Frog Census app for mobile phones, the outcome of a collaborative design process with Frog Census volunteers. The app has greatly expanded participation in the census. The Frog Census app is free to download, easy to use and contains a handy map and field guide function with species descriptions and frog call audio.

The Frog Census app is available from Apple and Android app stores and from our website (see below).

Habitat loss is a major threat to frogs across greater Melbourne. You can take action by creating frog-friendly habitat in your own backyard, property, farm, school or community garden. Habitat restoration increases the capacity of landscapes to sustain frog populations and helps link up disconnected frog communities.

Frogs require both aquatic breeding habitat and terrestrial foraging habitat and needs vary by species so it is important to research what species occur near you.  The Frog Census app has a useful map function that allows you to look up what species have been reported near you. Melbourne Water has also published a brochure with guidelines to assist you on creating frog ponds and gardens which is available on our website (see below).

One of the leading threats to amphibians globally is the spread of chytrid fungus. If you are recording frogs at more than one site it is important not to spread the fungus to different locations. Where possible stick to paths and avoid walking through mud if possible. Use a stiff brush to remove any mud that may be stuck to shoes or clothing. Methylated spirits or bleach can be used to disinfect shoes or contaminated clothing (and then washed off). Vehicles should be washed down if there is mud on the tyres.

It is also important not to handle frogs. Frogs are protected wildlife and disturbing them may stress individuals as well as increase the risk of spreading disease between species.

For more information on the Melbourne Water Frog Census go to www.melbournewater.com.au/frogcensus

Or contact the Waterwatch Coordinator, James Frazer, by email at frogs@melbournewater.com.au

"Frog populations face many threats, including habitat loss and modification, disease, introduced species, drought and climate change. Fortunately, there are many practical actions we can take to help conserve frog populations."

Some common frog species in Victoria

Males call year-round, with breeding peaks in spring and autumn.

Eggs laid singly, or in small groups on substrate.

Eggs laid in a foam raft.

Prominent green blotchy pattern and often a yellow/orange dorsal stripe down back. Elongate gland corner of mouth to shoulder.

Males can call year-round however calling peaks in spring and autumn.

Eggs laid in a foam raft.

Light to dark brown on back, with back of thighs yellow to orange. Pale stripe below eye, running to corner of mouth. Dark line above running from snout through eye. Webbed toes with toepad disks slightly larger than toes. Agile climber.