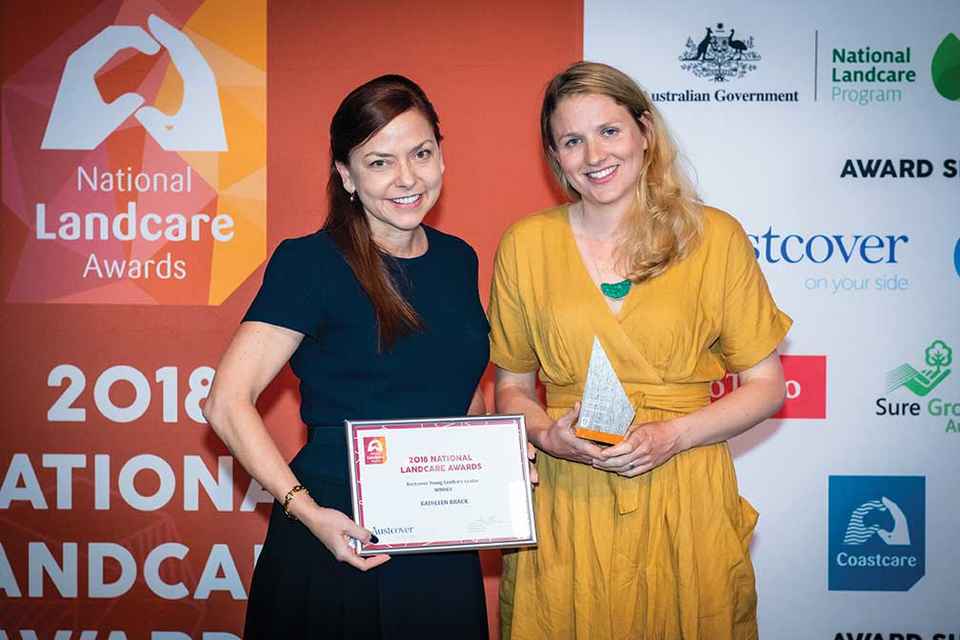 “It’s an honour to be able to recognise the great work being carried out by our Landcare champions. The National Landcare Awards offers Landcarers the ideal opportunity to get together and celebrate the individual and collective achievements of the community,” Shane said.

Wandoon Estate Aboriginal Corporation won the Australian Government Partnerships for Landcare Award. The Corporation represents the Wurundjeri people, the Indigenous owners of the historical property Coranderrk in the Yarra Valley.

Set up as an Aboriginal Reserve in 1863, Coranderrk closed in 1924. The Port Phillip and Westernport CMA has partnered with Wandoon Estate to restore environmental health and productivity to the farm. A farm consultant is now mentoring the Indigenous owners in farm management techniques, including productive beef cattle grazing, habitat restoration, and waterway management and protection.

Kathleen Brack won the Austcover Young Landcare Leader Award. Kathleen is the Regional Landcare Program Officer for the West Gippsland CMA. After just three years in the role Kathleen has changed the way the Landcare story is being told in the region. She has created new messages and found innovative ways of engaging with her community.

Keen to attract more young people to Landcare, Kathleen ran an Intrepid Landcare Retreat at Wilsons Promontory in May 2017 for 20 people aged 18 to 35. The participants learnt about Landcare, talked, hiked and worked with the local friends group. Graduates from the retreat have gone on to form the Gippsland Intrepid Landcare Group.

West Gippsland CMA Chief Executive Officer Martin Fuller said it was fantastic to see Kathleen’s dedication to and work within Landcare acknowledged at the national level.

“Kathleen has done a great job of supporting our five local Landcare networks as well as attracting young people to the Landcare movement across Gippsland,” Martin said.

For more information go to www.nationallandcareconference.org.au/awards/

Read next article: Women on Farms to celebrate 30 years in Warragul