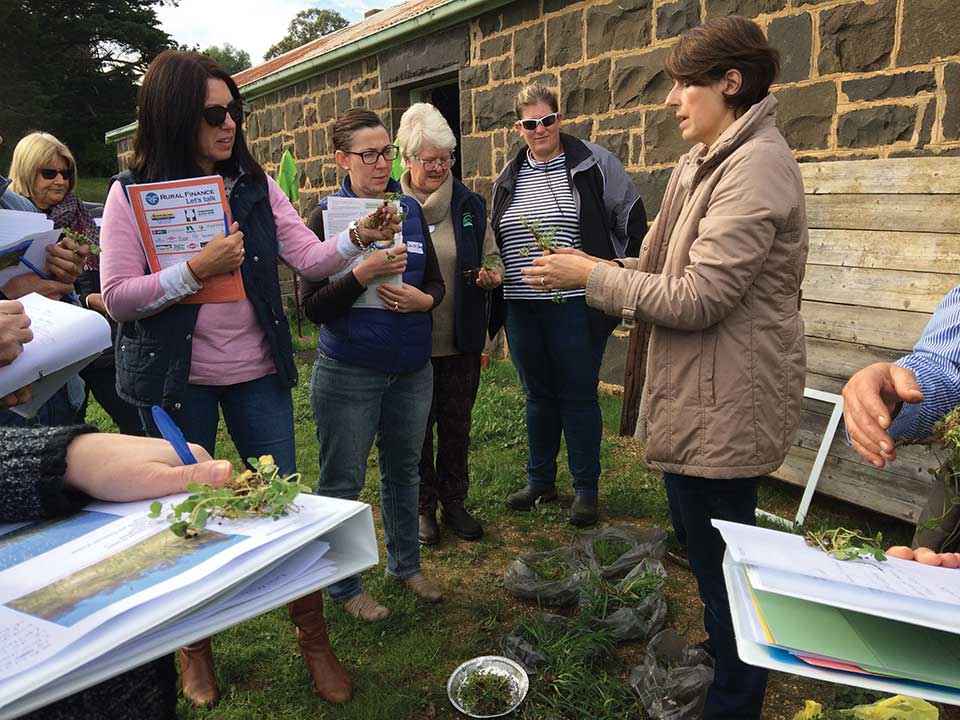 Above Lisa Miller from Southern Farming Systems leads a Women on Farms pasture workshop at Inverleigh.

If you look around at agricultural field days, you’ll be most likely met by a sea of men and very few women. This is despite the fact that 50 per cent of the population is female and women often play a significant role on the farm.

Feedback from Landcare events has shown that a lack of confidence is a key barrier to women’s involvement in agriculture. The feedback has also demonstrated that women are very willing to learn and that they often have greater knowledge than they give themselves credit for. With increased confidence women can provide another perspective on farm business planning and efficiencies and help to test important decisions.

Southern Farming Systems, together with the Corangamite CMA’s Regional Landcare Facilitator Program, has developed a pilot program called Women on Farms to support rural women in the catchment. The aim is to give women a safe space to ask questions and to have their understandings affirmed by someone from off the farm.

The pilot program involved four technical workshops delivered to women in the Woady Yaloak Catchment area and the Geelong Landcare Network area over 12 months. Workshop participants had an opportunity to connect with other women on farms and industry experts.

Each workshop had a theory and practical component, with an emphasis on group discussion and answering questions. The workshops aimed to provide a technical starting point for women to brush up on knowledge they already possess and to learn new information about mixed production systems. Topics have included soils, climate change, pastures, crops and livestock production.

The program has been very successful. Many of the participants were not previously members of Southern Farming Systems or of Landcare groups. Women between 31 to 40 years of age were best represented and 86 per cent of participants identified as commercial farmers predominantly from mixed enterprise cropping and grazing businesses.

The program has been designed so it can be repeated in other areas and has already been delivered in the Glenelg Hopkins CMA region.

Zoe Creelman is a former Research and Extension Officer with Southern Farming Systems and Karen O’Keefe is the Regional Agricultural Landcare Facilitator with Corangamite CMA.

Read next article: Lost and found in the Dandenongs