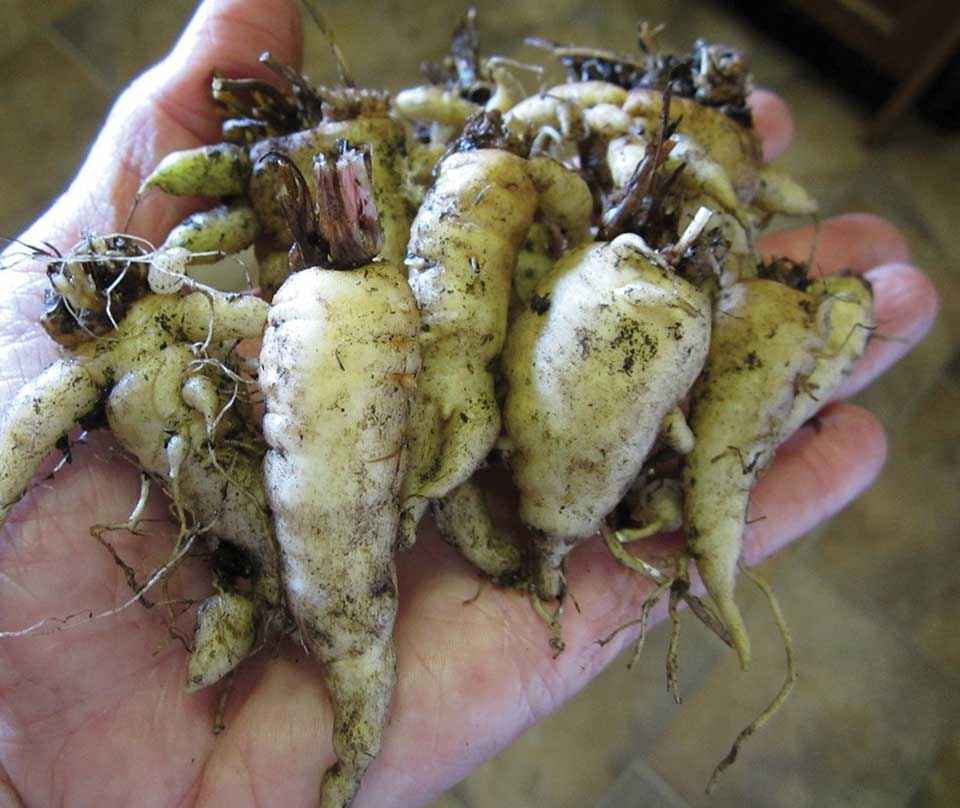 Above Murnong tubers are flavoursome and highly nutritious.

By Annette Peisley and Rebecca Peisley

A research project in East Gippsland has achieved significant results in increasing survival of murnong in restoration plantings.

The results are encouraging for the production of this culturally significant species as a commercial crop.

Under Aboriginal management murnong was widespread across grasslands and grassy woodlands of southern Australia, providing a staple food crop.

The introduction of grazing from livestock, rabbits and soil compaction due to western agriculture decimated murnong. It is now vulnerable and confined to small remnants. Bruce Pascoe’s book Dark Emu is a good source of information on the cultivation of murnong by Aboriginal people.

Annette Peisley and Rebecca Peisley conducted an independent research project from 2015 to 2017 to determine protocols for producing large, healthy murnong tubers in nursery conditions; identify the most suitable over-summer storage method of these tubers; and determine if transplanting murnong tubers could increase survival compared to field-sowing seeds.

They found that dry-air after-ripened murnong seeds need to be sown in the nursery in autumn (March-April) to produce tubers. This is important to allow the plants enough time to complete flowering by early December before entering summer dormancy to prevent heat stress and allow tuber survival underground.

The most successful over-summer storage method was storing dormant tubers in-situ in potting mix. These tubers had the highest regeneration percentage once transplanted into a restoration plot the following autumn, and went on to flower, produce seeds and survive to transition into summer dormancy. These new tubers can result in new plants the following year and are an important part of reproduction and local spread of this species.

Transplanting dormant tubers was much more successful than field-sowing seeds. Significantly more tubers regenerated than seeds germinated in the restoration sites. The tubers also produced more leaves more quickly than seedlings, which made them better at competing with weeds. Most tubers flowered, produced healthy seeds and survived to transition into summer dormancy while all seedlings died before flowering.

Being able to produce large, healthy tubers makes murnong an attractive species for the emerging bushfood industry. The white tubers are nutritious and sweet tasting. They can be eaten raw or baked, mixed with other vegetables or turned into a paste for desserts. The leaves can also be used in salads.

The methods from this study can be reproduced using containers in home vegetable gardens, or scaled up for production on farms.

Read next article: Showcasing food and fibre in the Otways


By Annette Peisley and Rebecca Peisley