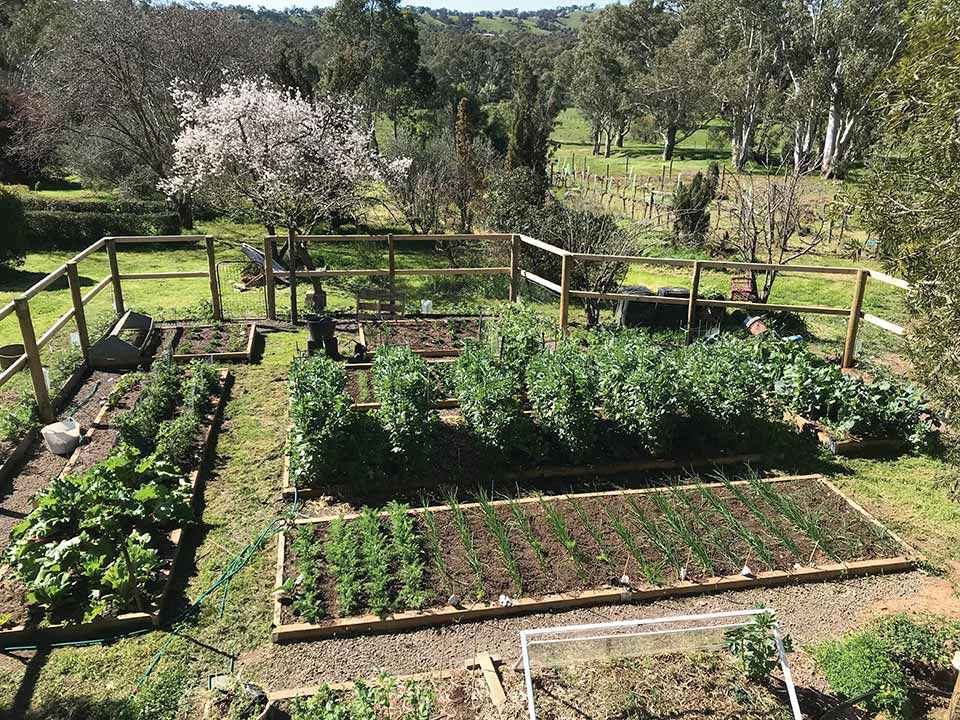 Above The MacEwan’s 54-square metre vegetable garden at Lockwood South supplies an abundance of household produce.

This is a personal account of home food production on our four-hectare property near Bendigo. I have never carried out an economic analysis or recorded yields from our gardens but have revelled in their proximity to our kitchen and the freshness of the produce that we grow.

We have celebrated our successes, briefly mourned the failures and come to accept the variability in quality and quantity that different seasons impose.

When the broad bean, courgette and tomato yields hit their peak just as the market prices bottom out you know the economics are not in it – certainly not if you were paying for a helper. Gardening is a labour of love. The anticipation of future bounty is an emotional driver, as is the fresh air and exercise.

Understanding the soil is critical for gardeners. As a pedologist I have been lucky to get to know a lot of different soils. The soil matrix enables root exploration, physically supports the plants and is a medium for supplying water and nutrients. The structure of this matrix is paramount. It is the spaces in the soil, their proportion, size and connectivity that allows movement and storage of water, diffusion of air and easy passage for roots.

Soils can be improved with time and care

By thinking like a root, flowing like water and breathing, the gardener will understand some important functions of soil. Some soils are a gardener’s nightmare. Hostile soils have too much clay, are too sandy, too shallow, too hard or too stony. Goldilocks soils (just right) are rare but can be built with time and care.

Our garden is on a north facing valley near the Bullock Creek. It has a granite derived soil with some hostile qualities.

Like many south-eastern Australian soils the subsoil is clay, tight and mottled, a rather airless, suffocating environment for root growth.

itting over this subsoil, below a thin but deceptively friendly loam, is a sandy, in some places gravelly, grey ‘spew’ layer that sets hard when dry and flows like self-levelling cement when wet. This is a Sunday soil – too wet to plough on Saturday, too hard to plough on Monday. Deep digging, gypsum, lime and organic matter have been my greatest aids to improving it.

Water supply is critical. We are fortunate to have a 4.6-megalitre water licence of piped rural supply from Coliban Water so there’s plenty for the garden and the vines. As well as fearsomely hot summer days over 40C the seasonal lottery can bring devastating frosts as late as November. We monitor the progress of the vines on the Bureau of Meteorology website. In four years out of 16 we have lost our entire grape crop to spring frost.

We have an area of 150 square metres fenced from rabbits and kangaroos. Within this area are eight 1.5-metre-wide garden beds bordered with treated pine sleepers. Paths between the main beds were excavated and replaced with bluestone road base. Soil from the paths was added to the vegetable growing beds which now have 30 centimetres of dark friable loam. The external perimeter is planted with fruit trees on dwarf rootstock to espalier and fan-train against the fence.

Each vegetable bed and the perimeter are serviced by driplines 30–40 centimetres apart with 1.6 litre per hour drippers at 30 centimetres spacing. An irrigation controller regulates the timing of watering via 25-millimetre solenoid valves from a 40-millimetre irrigation main connected to the rural water supply. I supplement with watering from a hose or watering can.

In summer a white 40 per cent shade cloth with 85 per cent light transmission supported by a marquee frame makes a huge difference to plant growth.

We grow many herbs and a complete alphabet of vegetables – from asparagus through to zucchini. It is this diversity of fresh produce that makes home production satisfying. This year I have built a small greenhouse and added unprotected no dig beds outside the fenced area where we are trialling potatoes, broad beans, tomatoes, pumpkin and squash for rabbit resistance.

The labour of winemaking

A few hundred vines were planted on the property in the late 1980s, so we have also become accidental viticulturalists and vignerons. The vines were in poor shape. Fire had damaged the irrigation system and burnt some of the posts, while gum tree saplings grew in the rows.

Friends with experience advised us to pull out the vines and not bother with wine making as it was too much work and heartache. We ignored the advice, removed the saplings and renovated as best we could. The dollar outlay was minimal until we bought nets and equipment.

We made our first rough wine in 2003 in buckets with grapes the birds had left behind. Wine making is labour intensive. Even on our small scale it takes about 20 days a year to maintain the vines, prune, thin the shoots and leaves, mow, net, pick, make wine, bottle and clean the equipment. Our vintages have ranged from zero to 2000 litres in 2017. In other years we filled two to four barriques (a 225-litre barrel) of shiraz and cabernet sauvignon. We’ve also produced small batches of chardonnay and cabernet franc.

Our garden is an adventure that has enriched our lives and the lives of our friends. It’s too small to be commercial and, realistically, too big to be domestic. The adventure continues inside the house where we are creative in our cooking and preservation to make use of the abundant produce. This year we processed olives for the first time, and they were great. There is always something new to grow and taste.

Richard MacEwan is a retired senior research scientist and a member of the Upper Spring Creek Landcare Group.