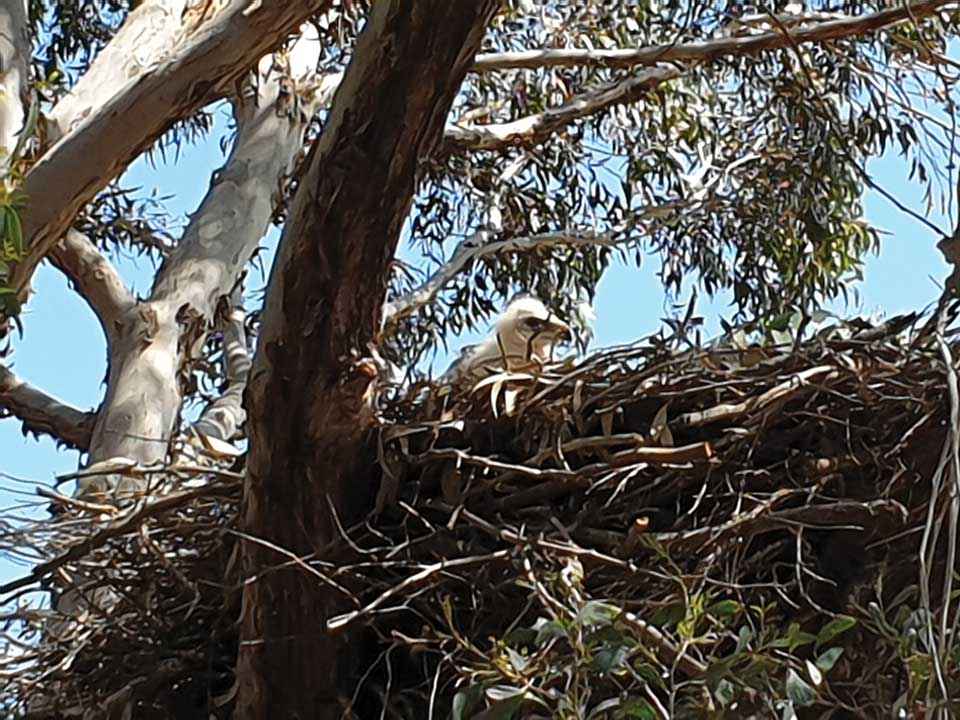 Above The escarpment is now free of serrated tussock and a haven for wildlife including this wedge-tailed eagle chick in 2021.

This is a story about more than just biodiversity, but rather about harnessing the power of nature and community to solve environmental issues. It starts in 1990 when my husband and I had two daughters under two, and we purchased a new farm on the western outskirts of Geelong.

The farm had the carcass of an 1854 bluestone house perched on a narrow ridge that jutted into the Barwon River flood plain. There were picturesque views of the river and its river flats and the Barrabool Hills on the skyline. There were also steep, rocky, non-arable and in some instances degraded, escarpments pock marked with vast ancient rabbit warrens which had exposed the infertile subsoil – an open invitation to opportunistic germination by every weed imaginable.

Our immediate priority was to fence the property into land classes so that those areas more vulnerable to over-grazing or not suitable for cultivation were managed differently. This was quickly superseded by an urgent need to find a way to manage an increasing infestation of an emerging weed in the district on the bare escarpments.

In late spring thousands of windborne serrated tussock seed heads were blown across the district from large infestations to the west.

The prevailing winds caused most of the seed to fall on the river escarpments and non-arable areas which were already degraded and difficult to access.

This was not a problem to be solved by individual land managers. It demanded that the entire community rally to fight the weed together.

In 1995, the Barrabool Hills Landcare Group was formed. Despite serrated tussock being a Weed of National Significance, there was little funding or support. Each land manager needed to find a way to control the infestations with their own or pooled resources, always knowing though that the community had their back. It was in everyone’s interest to succeed.

Our treeless escarpment was sprayed by fixed wing aeroplane and helicopter, using the recommended chemical at that time. The spray’s residual activity restricted germination of the serrated tussock seeds and every other grass species too. This left the area effectively devoid of any ground cover.

We decided to isolate the area and attempt to revegetate it with deep rooted native trees and shrubs, to repair and stabilise the soil. Our theory, which was not common practice at the time, was that as the perennial plants grew, they would cover the bare soil and make it difficult for the serrated tussock to germinate and set seed, providing a long-term sustainable solution.

We also decided to create a living barrier for serrated tussock seed blowing in from the west by planting multiple rows of casuarina (Allocasuarina cunninghamiana) along the top of the escarpment. We took advice from our local nurseryman, Stephen Murphy, and selected a range of local provenance and other indigenous species which we hoped would manage the extreme hot and dry conditions. Stephen suggested that we position the plants in groups of five to aid cross pollination and hopefully regeneration.

Between 1997 and 2000 we roped in family, friends, and local TAFE students, picking our way between the rocks to plant and guard 13,000 seedlings across 20 hectares of slopes. The terrain was so steep it was sometimes difficult to stand up.

There were good years and bad years – not unexpected as most of the slope faced north and had little organic matter in the topsoil. In 1998–1999, during the millennium drought, 70 per cent of the plants were lost and needed to be replanted the following year.

Over time most of the plants started to grow and drop leaves and branches. The water that had previously run off in sheets, began to slow and pool in the leaf litter. The organic matter in the soil increased providing good conditions for seeds from the native vegetation to germinate. Nature was healing the land.

We still need to clamber up and down the slopes once a year ducking under branches with a backpack to spray the odd tussock seedling or other weeds that have germinated from seeds that have found their way through a gap in the canopy or have survived in the soil.

Our once denuded landscape is now home to a rich variety of wildlife including echidnas, snakes, kangaroos, swamp wallabies and many bird species.

A rabbit proof fence right around the escarpment and a rabbit management plan have been successful at rabbit control. With a burgeoning population of raptors, rabbits are now a threatened species in the area. In 2021, for the first time, a pair of wedge-tailed eagles nested in one of the trees we planted and guarded more than 20 years ago.

It has been exciting to see our neighbours and the broader Landcare community witness what we have achieved and follow suit. Increasingly degraded or rocky non-arable areas on local farms are being fenced off and planted with perennial trees and shrubs, providing a more biodiverse environment, helping to manage pasture and crop pests, and importantly, preventing soil erosion by keeping the water in the soil profile – in effect a nature-based solution to a very challenging problem.

Added to this the landscape is now more resilient to changing climatic conditions and is just nicer to be in too!

The Rodden family are foundation members of Barrabool Hills Landcare Group. Kaye is currently on the executive of the group and also Deputy Chair of the Geelong Landcare Network.