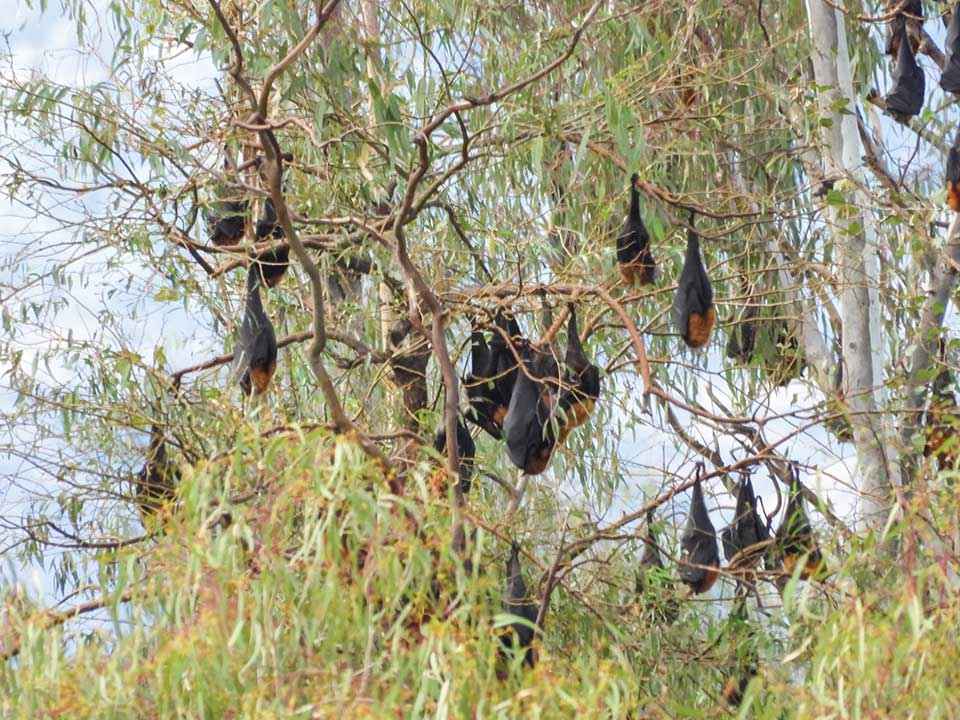 Above The grey-headed flying-fox camp at Gateway Island, Wodonga.

Albury Wodonga is home to several species of megabats. Both the grey-headed flying-fox and the little red flying-fox live in the area, sometimes together. The greys are noticeably larger. Flying-foxes are mammals. Like humans they live in communities and their wings contain the same basic hand bones as humans, connected by thin membranes – we are not so far apart at all.

Flying-foxes assist in pollinating and long-range dispersal of the seeds of flowering and fruiting trees, performing the unique service of night pollination, which many native species require. They are known as a keystone species, on which whole ecosystems rely. Along with the pollinating insects, megabats are key drivers of biodiversity in our native bushlands and forests.

Unlike microbats, flying-foxes don’t use sound waves to echolocate. They have good eyesight and a keen sense of smell to find fruiting and flowering trees. Nectar, blossoms and native fruits are their preferred food. They are very social and known for forming large noisy camps and chatting loudly while they feed.

Flying-foxes camped on the river at Albury have been known to feed on flowering eucalypts in Chiltern at night. They are adept at finding their favourite foods, and happy to travel. They migrate along the east coast of Australia — moving in large camps as different native fruits come into season. They fly thousands of kilometres a year. The migratory activity of flying-foxes complicates their conservation and management.

The grey-headed flying-fox is now listed as vulnerable to extinction in NSW and Victoria.

The greatest threat to flying-foxes is habitat loss. Over time their ancestral camp sites are being surrounded by urban development. Bats have been part of human superstition for centuries and are often viewed negatively by their human neighbours.

Climate change is having a huge impact on the species.

Flying-foxes are particularly susceptible to the heat, and recent scorching summers have seen countless bats die from heat stress. When temperatures are over 40C, flying-foxes need access to trees near the river so they can roost in cooler, humid air, in order to regulate their body temperature. Roost sites can host several thousand flying-foxes so many large trees are necessary to allow for air circulation. Flying-foxes also need to be able to move up and down within different layers of vegetation as the temperature and humidity changes – using upper, middle, and even lower canopies.

Parklands Albury Wodonga is addressing the needs of the local grey-headed flying-fox population with a bat biodiversity project at Bonegilla.

Bonegilla lies between Albury Wodonga and the Hume Weir spillway, where the Murray River emerges cold from the bottom of the Hume Dam and ancient river-red gums line the riverbanks and floodplains. While many trees have survived, the fertility of the floodplains has led to widespread clearing of both mature trees and understorey for farming. Regular grazing by sheep and cattle now prevents regeneration of the native vegetation. The habitat for our threatened native flying foxes is shrinking, just when the need is becoming more urgent.

With support from the Landcare Led Bushfire Recovery Grants Program, Parklands Albury Wodonga is securing habitat for the grey-headed flying-fox by fencing priority habitat in Bonegilla to exclude livestock.

Parklands Rangers are working with neighbouring farmers, local Landcare groups and volunteers with their River Stewardship program to fence several corridor reserves along the Murray. The removal of livestock will enable natural regeneration of native plants and the sites will then be managed for conservation. This will include revegetation with native plants in winter 2022, eventually providing height diversity, more roosting options and food for flying-foxes.

The project is supported by the Australian Government Bushfire Recovery for Wildlife and Habitat Community Grants Program.

Read next article: Banking the right seed for the future