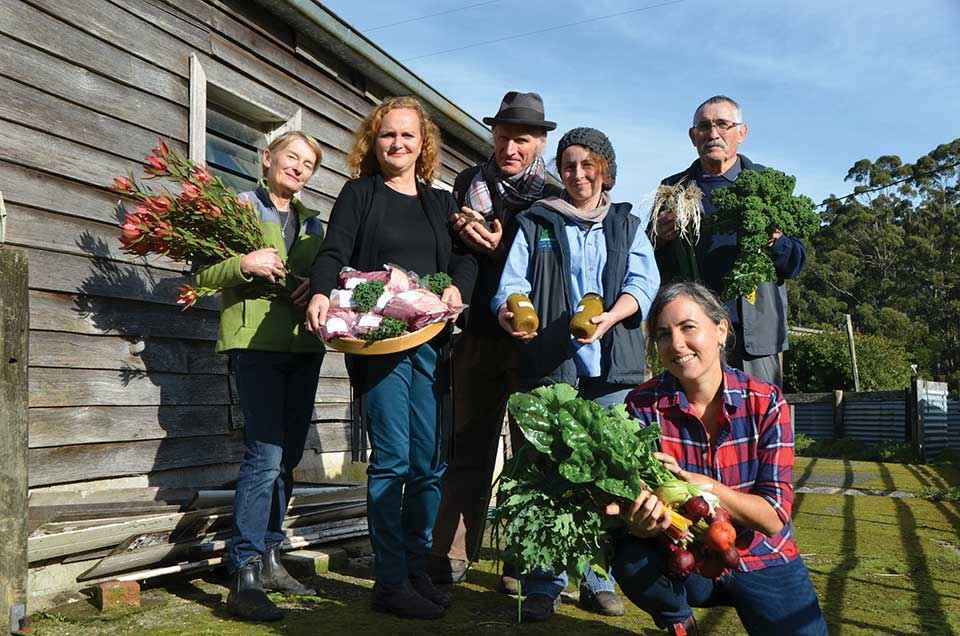 Above Local Otway producers participating in the Food and Fibre festival in Colac.

Planning has been a major activity in the region. NatureWest, Bass Coast, Yarra Ranges, Western Port Catchment, Moorabool, Middle Yarra, Mornington Peninsula and Nillumbik Landcare Networks have all been busy with Conservation Action Planning work that will help to clarify their focus and priorities for community engagement and on-ground works.

The time and effort the networks are putting into planning is a positive investment in the future. Good planning provides clarity of direction and purpose that can unify members, make it easier to explain goals and make decisions, work out who is best placed to help, and recruit the people and resources needed to achieve goals.

Landcare groups in the region have been involved in the release of the new strain of rabbit calicivirus aimed at reducing rabbit numbers and damage to the landscape.

Plans are underway to celebrate the 20th anniversary of the iconic Project Hindmarsh planting weekend. Hindmarsh Landcare Network volunteers and supporters will get together on 7-9 July 2017 at Little Desert Nature Lodge. The celebrations will involve visiting sites rich in Aboriginal cultural values along the lower Wimmera River.

Cross catchment partnerships have been a strong theme in regional Landcare. The CMA partnered with the Goulburn Broken CMA to deliver a peer-to-peer workshop for local Landcare facilitators in Nagambie in March. This was followed by the fifth annual Future Farming Expo held in Rochester on 5 April 2017, with a focus on future proofing farm businesses.

Landcare groups and landholders around Amphitheatre, Kerang and Ravenswood are collecting data as part of the national release of the new strain of rabbit calicivirus that took place in March. Landcarers within the region have been keen to volunteer release sites and act as citizen scientists, collecting vital data during this national experiment.

The North Central Chat newsletter remains a great source of information for Landcare groups in the region to keep up to date on Landcare related news, up-coming events and funding opportunities.

Cherish, celebrate, and imagine were the themes at West Gippsland’s 30 years of Landcare Green Carpet Gala held on 30 April at the Heyfield Wetlands. The event celebrated 25 Landcare individuals, groups and projects from across the region at different stages of their Landcare journey. The day included a five-course Landcare paddock to plate lunch showcasing pork, venison, beef, lamb and eggs produced by the local Landcare community.

The region will host the first Victoria-based Intrepid Landcare retreat in May. A group of 20 young people are headed to Wilsons Promontory National Park to spend a weekend learning about Landcare. Facilitated by Megan Rowlatt and Naomi Edwards from Intrepid Landcare, the retreat will inspire and empower young people with a passion for environmental conservation and build their connections with Landcare groups and organisations in the region.

The draft of the North East Community Natural Resource Management Plan has been released for public comment, with the final plan to be launched in June.

More than 20 participants from the North East and Goulburn Broken regions are being inspired by the sessions and activities of the 2017 Community Landcare and Agricultural Leadership Program that started in late February. Participants come from a wide range of backgrounds including agricultural and natural resource management professionals, and students.

The CMA together with Trust for Nature, DELWP, Parks Victoria, and Charles Sturt University’s Institute for Land, Water and Society are working together to present the 2017 North East Environment Forum. This year’s forum will focus on connecting people with nature and incorporates the annual John Paul Memorial Lecture to be held on 25 May 2017.

Locally grown and sown produce was on show in April at the Otway Food and Fibre event coordinated by Barongarook Landcare. Some of the best Otway-grown produce including olives, cheeses, native bush foods, fruits and vegetables, honey, meat, smallgoods, wines and other brewed beverages were on show.

More than 1500 people attended the event to taste and purchase produce, while meeting local growers and makers. Permaculture expert and Landcare supporter Costa Georgiadis brought his infectious energy and enthusiasm for sustainably grown food and healthy living to the practical demonstrations.

Farm Talk Magazine is a useful resource showcasing the innovative work being done in the region to enhance our soils, water and vegetation. Find it on the Victorian Landcare Gateway www.landcarevic.org.au. For climate change information specific to south west Victoria go to www.swclimatechange.com.au

Local farmers were captivated by a presentation from Associate Professor Robert Faggian from the Centre for Regional and Rural Futures at Deakin University in February. Professor Faggian’s presentation focused on farming for the future and provided great insight into climate change impacts on the local region.

Landholders have attended recent succession planning workshops and also listened to guest speakers such as Nigel Kerin from Kerin Poll, who discussed grazing management. The aim being to thrive, not just survive.

In April, Landcare groups came together to learn about social media. Participants learnt how to build awareness, create engaging content and were given useful tools and resources to promote Landcare activities.

Far East Victoria Landcare (FEVL) has initiated a trial program for the recycling of soft plastics, with the aim of extending this to include silage wrapping. The drop off point is the FEVL office in Orbost.

The Upper Mount Emu Creek (UMEC) Network has completed its long-running free tree to members program. The Waubra Wind Farm Community Fund sponsored the trees, which were grown from local indigenous seeds. The UMEC Network services groups in the Glenelg Hopkins and North Central CMA areas. The program has proven to be an excellent motivational and recruitment activity.

The CMA has had an excellent response to its small grants to celebrate 30 Years of Landcare. Successful activities included celebration dinners, published histories, photographic exhibitions and the development of action plans. There are many groups and individuals in the region who have been involved in Landcare activities for more than 30 years.

Upper Hopkins Land Management Group hosted a recent bat night with ecologist Peter Homan at Doug Hopkins’ Challicum property. Local Landcarers started with an evening barbecue followed by a session setting traps just before dusk. Peter explained his work and shared his knowledge of bats before returning to the field to check the nets. The 45 attendees were excited to find 35 bats from six different species.

Pest plants and animals continue to be a focus for the region’s Landcare groups and networks. The release of the new strain of rabbit calicivirus, the prolific growth of blackberries, and local government roadside weed control programs are keeping people busy.

The Northern Rivers Roundup held in March brought Landcare facilitators and coordinators from Goulburn Broken and North Central regions together to share and learn from each other. We had some great discussions around the issues associated with Landcare community support roles and how to do it better. A number of positive new partnerships and project opportunities were generated.

Landcare events are underway in schools and the community with workshops and forums. There’s a strong interest from participants and good feedback as the activities are evaluated.

In March the region hosted the final forum of the Victorian Landcare Council prior to its amalgamation with the FTLA to create the new Landcare Victoria Inc (LVI).

At the forum Landcare representatives from around the state enjoyed beautiful autumn weather at Lake Cullulleraine located in the far north-west corner of Victoria. Both Victorian Landcare Council delegates and regional Landcare members celebrated the achievements of the Mallee’s Landcare groups over the past 28 years and discussed how the region can be involved in LVI.

Participants came away with a greater understanding of the future challenges for Landcare in the Mallee.