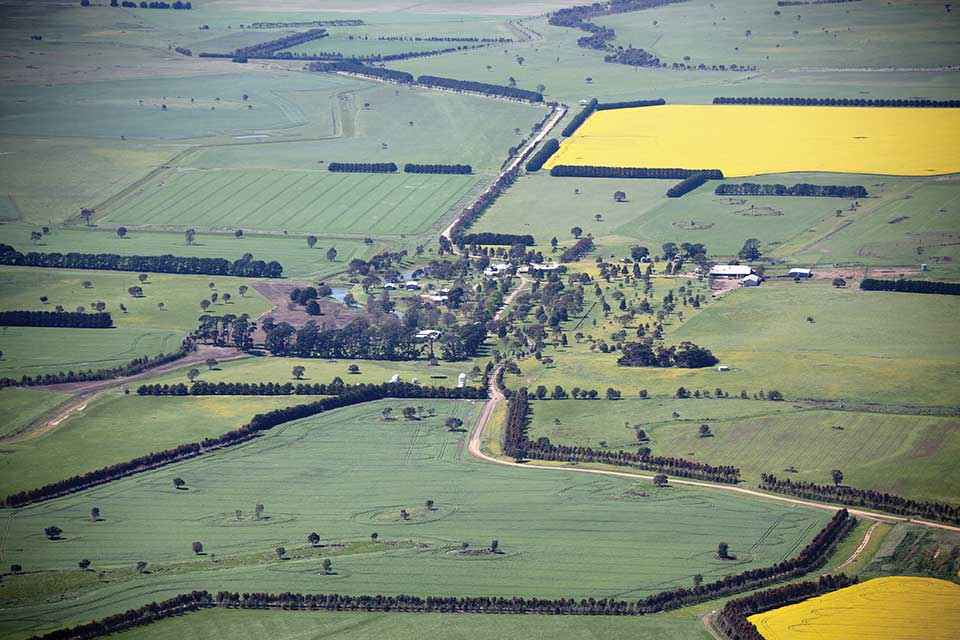 Above The climate change research was sponsored by Mt Hesse Station. The station is owned by a German family textile business with a mission to create a model farm that is profitable, and socially and ecologically sustainable.

Farmers are great adaptors. They have always had to cope with fires, floods, droughts, and pests, not to mention profits being squeezed between input costs and output prices. They have learnt to be self-reliant, listening to advice they trust, usually from neighbours and farm consultants, less often from distant experts.

So it’s not surprising that the topic of climate change is sometimes dismissed or downplayed as a political issue, possibly exaggerated by vested interests, and a bit remote from practical reality.

However, as shrewd observers, farmers in the Corangamite region have noticed some changes of late. There’s more summer rain and less rain in winter and spring. The autumn break tends to start later. As the onset of spring comes forward, the growing season gets shorter earlier and there are more heat waves and reduced run-off.

Local observations and adaptations are pretty much in line with what’s been measured and recommended by analysts in research institutes, universities and government agencies across Australia.

A workshop held at Inverleigh in March 2016 provided an opportunity for local landholders to discuss these observations and adaptations, and learn about the climate change research of a German researcher, Christin Meyer.

Christin is a doctoral student at the Potsdam Institute for Climate Impact Research in Germany and The University of Melbourne. She visited Australia for six months in 2015–16, including a six-week stay at Mt Hesse Station, which is close to Winchelsea.

During that time Christin interviewed 15 farmers in the Corangamite region about their perceptions of changes in weather and long-term climate, as well as about their management strategies. She also conducted 25 interviews with leading experts from research, government and private institutions to canvass best-practice management strategies that incorporate climate-change adaptation.

The workshop was held at Maxine and Duncan Campbell’s property ‘Barwonleigh,’ and attended by around 50 local landholders. It was supported by the Corangamite CMA’s Regional Landcare Facilitator (funded by the Australian Government) and organised by Upper Barwon, Surf Coast and Inland Plains, and Geelong Landcare networks.

At the workshop Christin added to the observations and possible adaptations that are already current in the area with information from analysts. She suggested staggering crop fertiliser applications to reduce unnecessary costs in the event of crop failure; breeding crop and livestock varieties that can better cope with heat and drought; fencing by soil type and cell-grazing to allow better pasture recovery; and matching stocking rates to seasonal variations.

Planting shelterbelts for shade and wind protection (and possibly for future income from carbon sequestration) was put forward, along with pregnancy-testing of ewes, to allow for lower fertility in rams suffering heat stress. Joining rams and ewes earlier and bringing forward shearing times was also discussed.

Some other ideas for better coping with changes in rainfall and water security included planning and budgeting for three-year droughts; storing enough water for three year droughts; building bigger and deeper dams instead of having several shallow dams to avoid high evaporation rates or even investing in farm-scale desalination.

Some local farmers have already taken up farm-scale desalination. The region is known to have untapped groundwater capacity, while surface water is in decline. A new idea for water saving emerged during the workshop from one of the participants, Jill Stewart. Jill suggested tempering evaporation from dams using water plants.

When Christin was asked whether the farmers she interviewed accepted climate change and global warming, she said wryly, “It was a good way to clear the room.”

"Local observations and adaptations are pretty much in line with what’s been measured and recommended by analysts in research institutes, universities and government agencies across Australia."

An opportunity for rejuvenation

Christin’s research is sponsored by Mt Hesse Station, and its owner – a German family-based business that specialises in textiles. The owner has a mission to create a model farm that is profitable, and socially and ecologically sustainable.

The workshop presented a possible rejuvenation opportunity for everyone involved. If farm risks are indeed changing and becoming even more challenging than in the past, there’s nobody better placed than farmers to deal with these risks. Risk-management and survival are second nature to farmers, and their best farming practices have already incorporated most of the possible adaptations.

Landcare also has much to contribute. It is an important conduit for information on emerging risks and possible remedies. Landcare projects like shelterbelts and the protection of rivers and streams that have benefits for the farm, but also beyond the farm gate, may also be eligible for public funding.

The endpoint is healthy, happy farmers and communities living and working in a healthy and sustainable natural landscape.

Findings from Christin Meyer’s research were used to prepare this article. Peter Greig is the President of the Upper Barwon Landcare Network.

Risk-management and survival are second nature to farmers, and their best farming practices have already incorporated most of the possible adaptations.