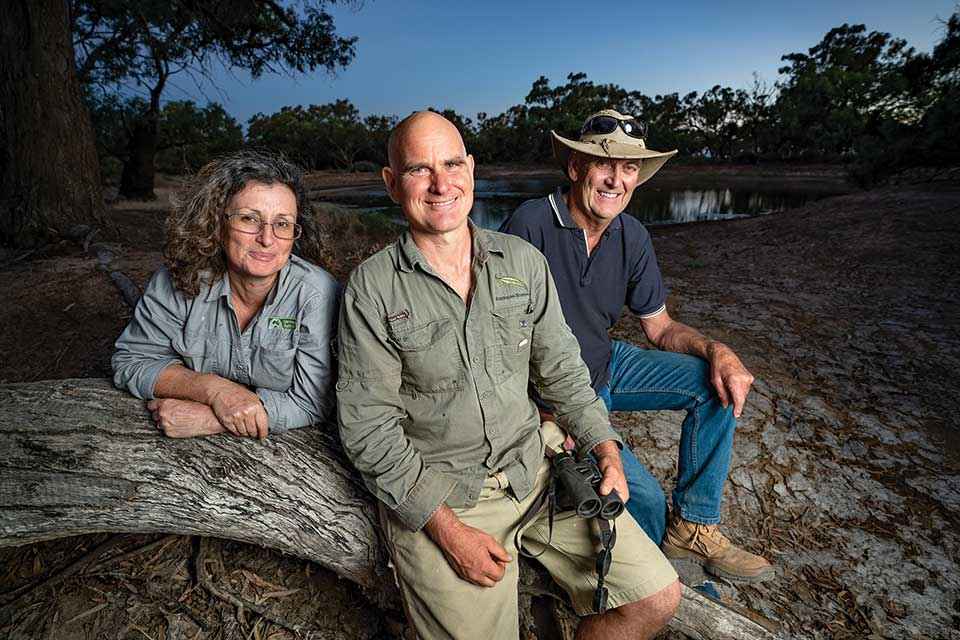 Where do people go when times are tough in a dryland farming community? The answer, for the people of the small Mallee town of Nullawil, is often their local wetland.

Uttiwillock wetland is on the Tyrrell Creek, about five kilometres east of Nullawil, which has a population of less than 100. According to Nullawil Landcare Group secretary-treasurer Donald Cooper, the community has been the driving force to fill the wetland with water and care for the site.

Community fundraising meant the wetland was linked with the Wimmera-Mallee pipeline in 2017 and pumped with an initial five megalitres of water. The community has maintained its commitment to keep the wetland flourishing by donating resources and paying for water to be pumped.

“We’d been trying for seven years to get this wetland established and get environmental water. It’s so important to the community. When there’s pretty hard drought times, it’s somewhere to go that doesn’t cost anything and when you meet others that are going through the same thing, you realise you’re not in it alone,” Donald said.

Fellow Nullawil Landcare Group member and landholder Wade Humphreys said current drought conditions meant many local farmers were feeling down on their luck and the wetland had helped them reconnect with one another.

“You never know what you’re going to see when you go out there. Mobs of kangaroos come bounding through, there’s birdlife, wildlife. Every time you go out there you see something different. We’ve had a few functions out there where we can sit around a fire, have a yarn or go for a swim. People have said it’s really helped them out. The kids love it. They go out looking at birds, climbing trees – it’s a big outdoor playground.

“The importance of getting water in, it’s crucial to the environment, to the community and their mindset in the tough years. Little towns are dying and it really does mean so much to us,” Wade said.

Uttiwillock has benefited from recent works by the Mallee CMA with funding from the Victorian Government’s Our Catchments Our Community program. Works have included fixing potholes, maintaining tracks, removing old fencing, pest plant and animal control, including
the eradication of boxthorn and prickly pear. The Mallee CMA has also provided a grant to the Nullawil Landcare Group for the installation of 25 new bird nest boxes at the site.

The group conducted a flora and fauna survey at the wetland in late 2018. Conducted by wildlife ecologist Damien Cook, the survey revealed 149 species of native fauna, including 131 species of birds, and 18 threatened species, along with 109 plant species. The results were released at a community wildlife event held at the wetland.

According to South East Mallee Landcare Facilitator Sue Pretty, the survey aimed to justify efforts to secure environmental flows into the wetland in the future.

“The survey results show the impact the community’s initiative has had on the environment. We wanted to hold a community event to publicise the findings and also to get people to recognise what they have here and why it’s important,” Sue said.

The event was enthusiastically supported by the local community.