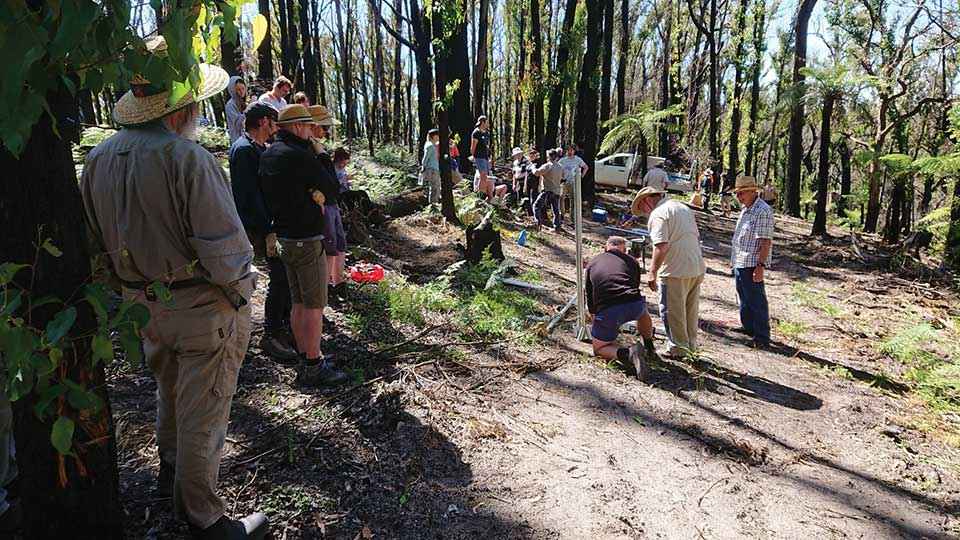 Above Volunteers watch a demonstration on the construction of an electric fence to exclude deer from lyrebird habitat at Garfield North.

In 2018 members of the Cannibal Creek Catchment Landcare Group (CCCLG) visited Alan and Angela Forte’s property at Garfield North. Lyrebird expert Alex Maisey gave a talk on lyrebird breeding cycles, calls and habitat. This was followed by a walk up a fern gully to see lyrebird habitat and nesting sites.

When we arrived at the site we discovered that the habitat had been largely destroyed by fallow and sambar deer that had created wallows, browsed and trampled the vegetation. There were no intact nests and no leaf or stick litter essential for nest building. Then, in March 2019, the Bunyip fire burnt almost all of the bush on the property, only a small area of the fern gully surrounded by granite boulders escaped the flames.

The idea of building a fence to protect the site from deer was raised in discussions on how to best use funds donated through the community bushfire appeal coordinated by the Bendigo Bank. Alan and Angela Forte were keen to proceed with the project. Geoff Lockwood, project manager for the Cannibal Creek Catchment Biodiversity Project, helped with the application for funds.

The funding application was successful and they were also able to get support from the Gallagher Group Limited for materials and advice on the best option for the site – a new type of electric fence. A route for the fence was planned by the landholders and Geoff Lockwood using GPS coordinates. The project kept increasing in size due to the difficulty of the terrain. Fortunately, neighbours Peter and Lyn Link were happy to allow the fence to deviate into their property. The exclusion area eventually covered close to three hectares.

Prior to the construction of the fence the Forte’s had to remove a number of fallen trees to allow a clear line of sight. By December 2019 we were ready for a fence construction working bee. Members of CCCLG plus a group of younger people from Intrepid Landcare, Windana, and St Vincent de Paul Pakenham attended. A number of fencing contractors came along to help, while also learning to construct the new electric fence. Our Facebook page also brought people from Upper Beaconsfield and Melbourne Water.

Building the first section of the fence was time consuming due to the steep terrain and the inexperience of some of the helpers, but it was a great day for learning and friendship. We walked down to the unburnt section of the gully and were delighted to see that several rare butterfly orchids (Sarcochilus australis) were flowering.

As the size of the fence kept extending we exhausted all of our bushfire recovery funds before it was completed. The Cannibal Creek Catchment Biodiversity Project was able to allocate some funds from its DELWP Biodiversity Response Planning project and many costs were
met by Alan and Angela Forte to make sure the fence could finally be finished.

We wait to see if the biodiversity of the site with its lyrebirds, ferns and endangered orchids will return to its former glory now that deer are excluded. The whole community will benefit from the improved biodiversity at this site. We thank Alan and Angela Forte and all of our hardworking members for their commitment to a healthier future for this valuable landscape.