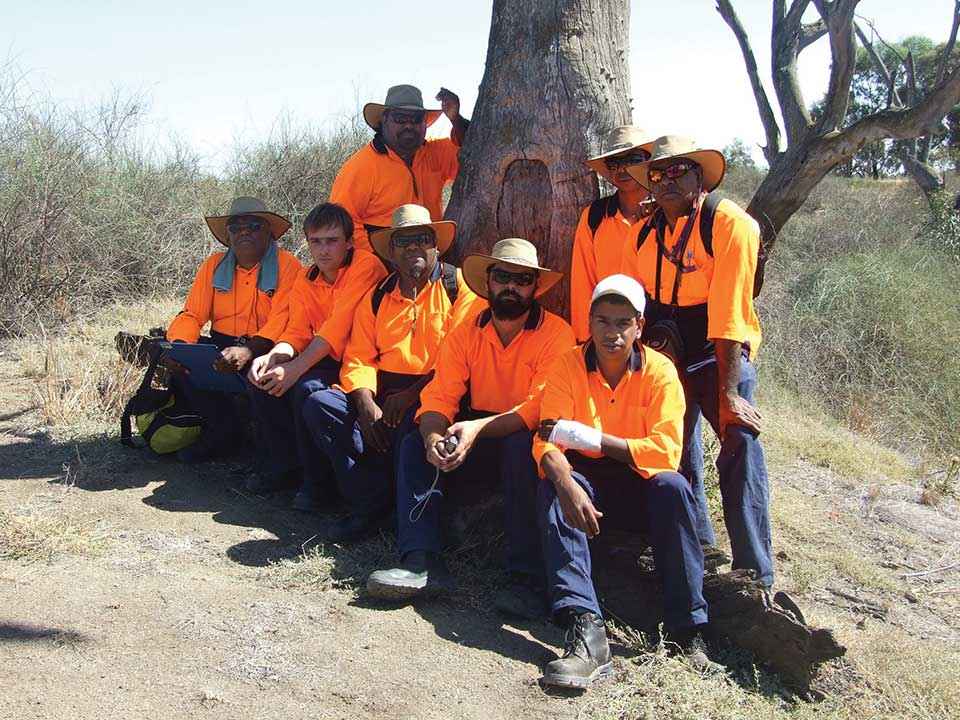 Above Members of the Barapa Barapa Indigenous Works Crew undertaking cultural site assessments along the Loddon River, from Appin South to Kerang in 2009.

The social and economic impacts on communities and individuals who live, sometimes for months on end, with little or no rain can bring even the strongest to their knees. That’s when Landcare and the North Central CMA Drought Employment Program (DEP) steps in to help.

With funding from the Victorian Government, the North Central CMA has hosted four DEP programs since 2008. The programs are a win for farmers and for the environment. They provide local employment opportunities for drought affected farm workers, tradies and community members to undertake a range of natural resource management activities.

Planning is critical to ensure each program is a success.

Drought affected farmers, farm workers, farm service providers or rural community members adversely impacted by the drought submit an expression of interest to be part of the program.

Flexible employment arrangements are available to suit the needs of individuals who have ongoing farm work and seasonal commitments.

All employees are fully inducted and trained to North Central CMA requirements, including occupational health and safety, chemical and manual handling, and first aid training. Specialist training on chemical usage and chainsaw operation is undertaken by crews using these skills. Fencing crews with skills and experience are also established to complete works according to agreed standards.

All employees are provided with the equipment they need to do the job including full personal protective equipment, project materials, tools, work vehicles and mobile phones. A work crew leader is appointed to help coordinate employees, project partners and the North Central CMA.

Landcare has been a steadfast and successful DEP project partner. Landcare groups and networks are a first point of call when a DEP program starts. Many important local Landcare projects involving weed control, fencing to protect habitat, and revegetation have been assisted by DEP work crews.

DEP replicates the Landcare model – local people deliver local projects. It also allows people facing times of uncertainty and crisis to stay within their communities without having to seek work elsewhere. DEP helps to build the capacity of individuals and the community through training that can provide future employment options. It supports the wellbeing of participants and has a flow-on economic benefit to drought-affected communities. The on-ground works also achieve positive natural resource management outcomes.

The Buloke Northern Grampians Landcare Network, located in St Arnaud, is a frequent DEP project partner. According to the network’s Landcare Facilitator, Kevin Spence, when the DEP is on his phone starts ringing.

“Landowners start calling because farmers and landowners know the resources are available and they know from experience that it works. When the drought crews come they’re a real catalyst for farmers who are really struggling as they see people coming out from the CMA which motivates them to do some work themselves. They don’t feel like they are all alone. I don’t know how you measure it, but I wonder what the multiplying effect is.”

Kevin said really positive relationships form with each crew and working with DEP gave him a personal sense of achievement.

“I absolutely loved it – it allowed me to achieve things, it justified my existence. It was great to see so many people on the ground. I’m so supportive of these programs.”

DEP was given a further boost in 2009 when one of its crews, the Barapa Barapa Indigenous Work Crew, won the Victorian Indigenous Landcare Award. The crew’s work focused on Aboriginal cultural heritage and river health assessment.

The work undertaken by the crew helped the North Central CMA staff better understand Indigenous issues within the region. Cultural site information collected by the crew was made available to Aboriginal Affairs Victoria for inclusion on the Victorian Aboriginal Heritage Register.

Dairy farmers Colin and Bev Domasche from Kerang were on track for a stable financial future until the millennium drought threatened their livelihood. Further dry conditions in 2015 took them to the edge. The 2016-17 DEP program arrived just in time.

According to Colin and Bev the DEP has been valuable both financially and mentally.

“We would have been alright if the milk prices didn’t go down. But the drought came and the water sort of fizzled out, we couldn’t afford it. We were getting 18 cents per litre and we had to get 21cents per litre to break even, so we were just going backwards. When I saw this in the paper, we jumped on it and it really helped us,” Colin said.

The program offered off-farm paid employment and involved works such as tree planting, fencing, spraying weeds, rubbish removal and pest control. Like most crew members, Bev and Colin said the program helped them to connect with other people who were also in difficult financial circumstances.

“As well as attending to farm work I was also working at the piggery to make ends meet and that was really tiring work.

We worked hard over the years, and with the drought, we hadn’t yet recovered properly. It will take some years to recover financially, physically and mentally. Colin Domasche

It will take some years to recover financially, physically and mentally. The program really helped us with having to get up each morning. We met a lot of people like us, in the same boat,” Colin said.

According to Bev the program also enhanced her and Colin’s appreciation of the natural surroundings.

“We can see the difference in what we are doing, particularly at the lakes and in the Gunbower Forest. We probably didn’t appreciate the environment in the past but when you’re involved in something like the DEP you do look around and say, ‘well that is beautiful’ and take care of it.”

The North Central and Goulburn Broken CMAs are running DEP in 2020.

For more information go to www.nccma.vic.gov.au

Read next article: Leigh Catchment Group shares its lessons from the Scotsburn fire