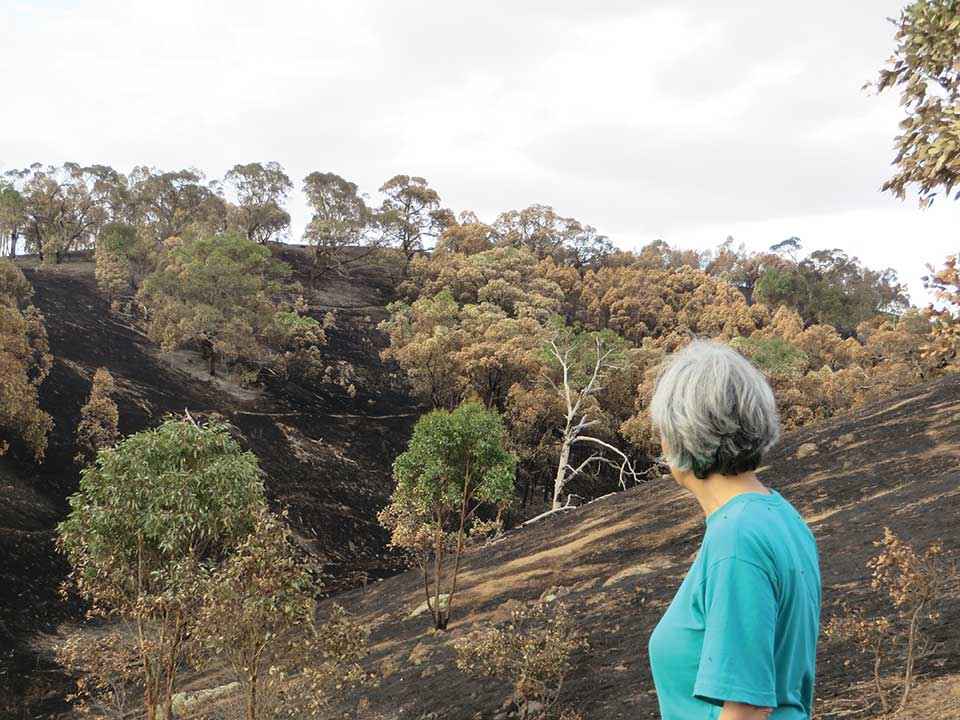 Above A scorched hillside at John Robinson and Farideh Lashkary’s property at Bylands after the February 2014 fire.

On Sunday 9 February 2014, strong winds and a temperature of 40C (for the second day in a row, and with a statewide Total Fire Ban) saw 78 fires ignite across Victoria. The most serious of these fires started around midday when a sugar gum on the side of Mickleham Road at Mickleham, 30 kilometres north of Melbourne, fell on powerlines causing sparks to ignite the tinder dry grass.

Driven by strong winds the fire travelled 40-50 kilometres north towards Kilmore. I spent an anxious night watching the glowing rim of the out-of-control grass fire from a hilltop on our property at Bylands.

Thankfully the next day was much cooler, but the fire had split into two fire-fronts, and during the day it threatened both Kilmore and Wallan townships.

By early Monday afternoon the second fire front had reached Bylands from the south and was racing rapidly across the paddocks towards me. My partner, Farideh, had gone to a friend’s home in Kilmore. I felt reasonably well prepared and confident that I could deal with the grass fire. Wearing a firefighting knap sack on my back, as I needed to be agile, I was able to stop the fire burning the house and sheds before it passed, the wind driving it north across the paddocks towards Kilmore.

The next six hours were intense. I worked nonstop putting out burning logs and burning wooden fence posts between sheds, and garden sleepers and embers that were igniting unburnt grass near the house. One pile of logs kept flaring up as I couldn’t get enough water on to them. I relayed this problem to Farideh over the phone. She contacted the local police who helped organise a firefighting helicopter which dumped 40,000 litres of water on the pile of burning logs that night – a welcome relief.

After six days the Mickleham-Kilmore fire was declared under control.

While no lives were lost the fire’s impact on local communities was immense.

The fire destroyed 18 houses (some were never rebuilt), many sheds, and public infrastructure including several wooden bridges. More than 16,000 head of livestock died during the blaze, which also burnt 1670 kilometres of fencing, 9000 hectares of pasture and 2300 tonnes of hay. The economic loss from the fire was estimated to be $18.9 million.

Landowners in the Upper Maribyrnong Catchment Group’s (UMCG) area were left with 17,000 hectares of burnt land – 73 per cent of the group’s area. The UMCG is in Port Phillip and Western Port CMA region. It has around 75 members and is one of three member groups of the Upper Deep Creek Landcare Network (UDCLN). To the north, the adjoining Willomavin Landcare Group (WLG) had a further 3000 hectares of its area burnt. WLG is in the Goulburn Broken CMA region and is a member of South West Goulburn Landcare Network (SWGLN).

Direct experience of the immense ferocity and destructive power of a bushfire generates enormous respect for fire. The impact and scale of destruction from a bushfire can be overwhelming and soul destroying, and it can take years to recover. I have vivid memories of the fire we experienced in February 2014. While it was nothing like the Black Saturday inferno in 2009 that began 15 kilometres away at Kilmore East, the journey of fire recovery for many of those impacted by these and other fires continues to this day.

Immediately after a bushfire there’s lots to process and consider. The human instinct of needing to repair what has been destroyed quickly kicks in. This can include immediate needs such as providing feed for livestock, repairing fences and disposing of dead livestock. It could also include issues such as soil erosion, water quality and burnt trees. Areas of native vegetation and pasture do recover after fires. Waiting and watching how nature responds after fire can sometimes be the best approach.

Bushfires, like many emergencies, bring people together to support each other and to assist with the recovery process.

Many Landcare groups/networks have played critical roles in natural resource management (NRM) emergency recovery, and have worked with individuals, communities, and government to deal with the impacts on natural and agricultural environments.

Within one week of the Mickleham–Kilmore fire being declared under control the local Landcare groups/networks held a meeting to plan the NRM fire recovery. The Landcare, local government and agency staff at this meeting who were involved in the 2009 Black Saturday fire recovery work, shared their knowledge and lessons learnt about the fire recovery process.

The UMCG and SWGLN then collaborated closely to plan and deliver NRM fire recovery workshops for rural landholders. Community education was critical. Fire-affected landholders wanted to know what to do, when and how to do it, and what they should look out for through the recovery process. Around 450 people attended the 15 workshops that were delivered during the first 12 months.

There was a thirst for knowledge among landholders with some attending every workshop. Venues convenient for the fire-affected landholders were chosen and takeaway pizzas made catering simple.

Darraweit Guim township, where two homes were lost in the 2014 fires, is at the centre of UMCG’s area. The Darraweit Guim community organised a fire recovery picnic concert a month after the fires. This brought the community together to recognise its strength and survival following the fires, and to enable locals to re-connect and share their experiences.

The UMCG received great support from Darraweit Guim’s community with the delivery of the fire recovery workshops. The Darraweit Guim Memorial Hall Committee donated the use of the hall for workshops. The monthly community newsletter, Guim Tales, included details about each workshop, and Lorreine Dalton, the local postie, distributed workshop flyers on her mail run to 150 local landholders.

Siltation of dams and waterways and erosion are major issues after many bushfires. Landcare Australia funded a truck load of rice straw bales for distribution to fire-affected landholders for use as sediment barriers. Melbourne Water’s Rural Land Program provided 370 coir logs to manage sediment in the UMCG’s area.

The UDCLN provided their Landcare Facilitator to support fire recovery efforts, and part-funded a reprint of the Weed Detection and Control on Small Farms booklet, for fire-affected landowners. The SWGLN developed five new Landcare after the Fires information notes, that were loaded on to the new fire recovery pages on the Victorian Landcare Gateway, which was developed by DELWP’s Victorian Landcare Program staff. The UDCLN’s Landcare Facilitator also created a UDCLN Facebook page to share fire recovery information.

To assist landholders with their fire recovery revegetation efforts, the UMCG subsidised and made available to group members 5000 indigenous plants for 20 cents each.

Subsidising the cost of the plants minimised the financial burden for members and maximised the number of plants going in the ground.

The fire had burnt across two CMA regions. Goulburn Broken CMA was able to provide some funding to support on-ground fire recovery projects in the SWGLN area. The UMCG secured $51,000 in Australian Government National Disaster Relief and Recovery Authority funding to reinstate fencing along waterways and off-stream watering systems damaged in the fires where there had been previous Victorian Government investment. A $30,000 Victorian Landcare Grant tackled a major gorse infestation across nine fire-affected properties.

One of Landcare’s strengths is its ability to be agile and adapt to changes in circumstances and conditions, and still get things done, even after emergencies such as bushfire.

The 2014 fire’s impact has been much more than economic. The UMCG gained 10 new members by demonstrating its relevance to the local community through its fire recovery work. SWGLN and UMCG won Community Fire Recovery Awards at the 2015 Fire Awareness Awards. The award judges noted that UMCG’s fire recovery work demonstrated great community outcomes and was really forward thinking in delivery.

The success of the fire recovery workshops demonstrated a strong appetite among local landholders, many of them lifestylers, for land management information and knowledge. In response the UDCLN secured Australian and local government grants to deliver five three-day Property Management Planning Courses in 2016 and 2017, which were attend by around 90 landowners. The courses were delivered by small farm consultant David Stewart and soils specialist Chris Alenson. Two of the courses were delivered with SWGLN. The collaborations fostered between the Landcare organisations across CMA regions after the 2014 fires continue to enrich our Landcare and NRM work.

After bushfires some things can be repaired and replaced, but others, such as the huge remnant trees that were hundreds of years old, cannot. Their loss is felt acutely across the landscape.

John Robinson is Secretary of the Upper Maribyrnong Catchment Group.

Read next article: A community response to drought in Millewa-Carwarp