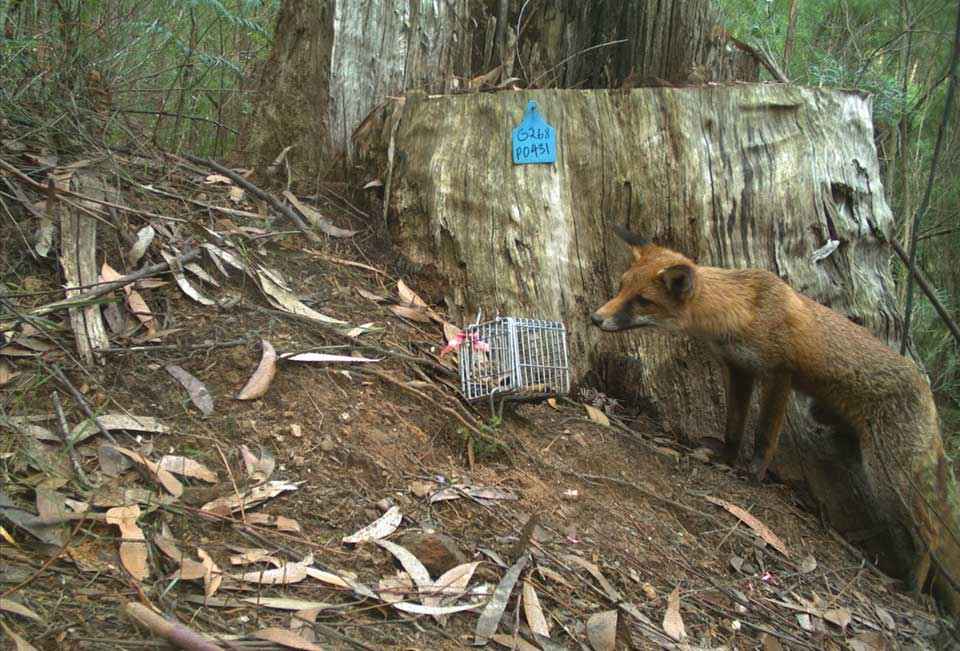 Above A fox checks out a lure at a trapping site in the Club Terrace State Forest near Cann River.

The Southern Ark project is the largest wildlife management project in Victoria, delivering effective fox control across one million hectares in East Gippsland, for the benefit of native wildlife.

The intensity and scale of the 2019-20 bushfires destroyed much of the vegetation and ground cover across the Southern Ark project area. This put surviving native animals at even greater risk from foxes, as they struggled to recover in an environment with little food and shelter.

After the fires, a decision was made to expand Southern Ark as part of an integrated invasive species management program across the fire-affected landscape. Land managers were faced with complex decisions about which areas would be most suitable for the expansion. There were many factors to consider, including local knowledge of pest animal threats, post-fire assessments and which native species were most in need of protection.

A key support tool for this planning was Strategic Management Prospects (SMP). SMP is a publicly available tool developed by DELWP that helps identify what actions to do and where to do them, based on the greatest benefit to the most species at the least cost.

In the case of the Southern Ark expansion using SMP reassured program managers that delivering fox control in the newly identified areas would provide the most benefit to native species after the fires.

In 2020, the Southern Ark project area was expanded over approximately 106,000 hectares, including a 64,000-hectare extension into the Colquhoun and Kenny State Forests, and the Tambo Forest Management Area.

The Southern Ark team closely engages with local communities across East Gippsland and the community has continued to support Southern Ark as it expands to deal with the impacts of the fires.

Andy Murray, Southern Ark Operations Manager, has received many messages of support from the community.

“Landholders have been disheartened by the devastation but also cheered by signs of recovery. The Southern Ark team was on the ground quickly restoring sites and equipment and this has been a positive sign for the community,” Andy said.

This community sentiment is reflected in support from the Victorian Government and key stakeholders. The ongoing support provided to Southern Ark will help ensure that wildlife in East Gippsland have the best chance of survival into the future.

The Southern Ark project is managed out of the Orbost DELWP office and funded through the Victorian Government’s Weeds and Pests on Public Land and Bushfire Biodiversity Response and Recovery programs.

Read next article: A community approach to gorse in Ararat and the Upper Hopkins