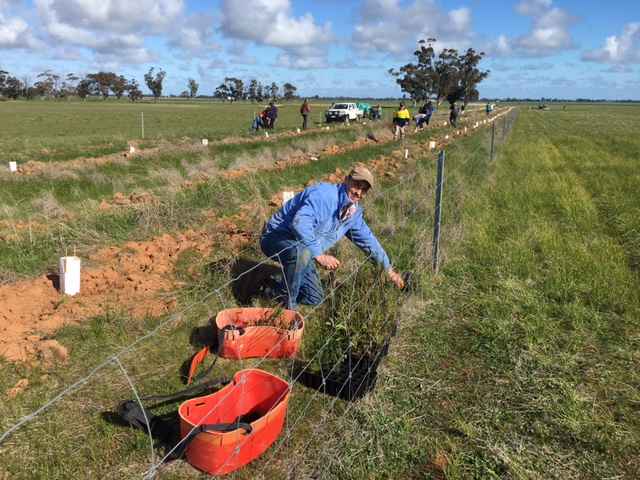 During 2018, nearly 4000 trees and shrubs were planted as part of three successful community plantouts run by the Buloke and Northern Grampians Landcare Network involving local schools, landcare groups and volunteers.

During 2018, nearly 4000 trees and shrubs were planted as part of three successful community plantouts run by the Buloke and Northern Grampians Landcare Network involving local schools, landcare groups and volunteers.

Twenty five Year 9 students and staff from the St Arnaud Secondary College participated, along with 5 staff from Riverlea, and 8 volunteers.

It was the second year that Riverlea has been involved in a community plantout.

Students camped out overnight at Rob Youl’s as part of the School’s annual Enviroweek and the Resilience Program.

The second plantout was on the property of James Goldsmith at Jeffcott North.

This was the inaugural plantout involving the Fredrick Harold Sock Company who have pledged to ‘plant a tree for every pair of socks sold’.

Altogether, there were over twenty two volunteers participating in this plantout which planted 1400 tubestock over one and a half days on July 21st and 22nd.

He had great feedback from everyone involved in the weekend’s plantout and that he had found a new appreciation and respect for volunteer and community organisers.

‘ I was extremely happy with the outcome of the weekend and look truly hope to do this again’ he said.

‘I will continue to build a network of helpers from the company and from amongst family and friends, but have also been contacted by engaged customers who would like to join in next time’ said Jesse.

35 staff and students planted from St Arnaud Primary School nearly 600 tubestock on the property of Dale Polkinghorne at Slaty Creek on August 19th.

The school continues to be is a keen participant in Landcare plantouts and this was another successful day.

Kevin Spence, facilitator with the Buloke and Northern Grampians Landcare Network, congratulated everyone on the success of the plantouts.

‘It is great to see schools and corporate organisations getting involved and helping landholders who have limited time and resources achieve environmental outcomes on their properties’, said Kevin.

‘I have many landholders asking about doing plantings and this volunteer contribution, along with funding that the Network can source for tubestock, make it all very possible’ he said.

‘Promises such as those from Fredrick Harold Sock Company are particularly valuable – so even if your contribution is buying as many pairs of socks from them as you can, will be a good thing!’ he said

‘I am always keen to hear from any landholders looking to do plantings for biodiversity, land protection, shelter or any other good reason’ said Kevin.

The plantouts are annual events open to anybody interested in Landcare or the environment.