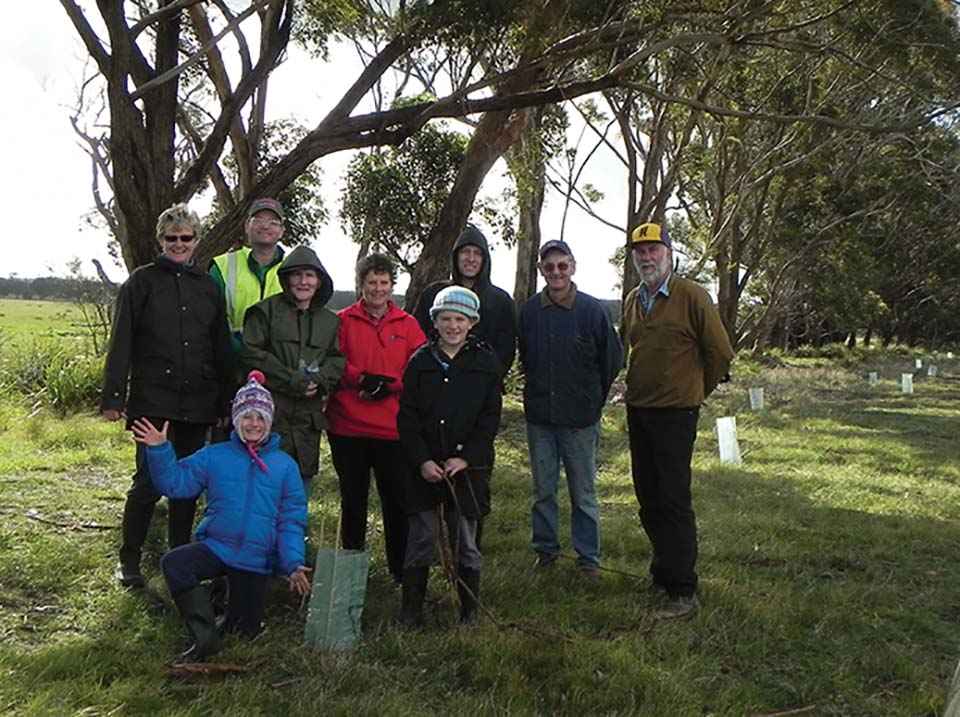 Above Dedicated members of the Merriman Creek Landcare Group brave wintry conditions at a tree planting event in 2010.

The Merriman Creek Landcare Group has been looking after the health of the Merriman Creek and its surrounding environment for 31 years. Merriman Creek flows from the headwaters of the iconic rainforests of the Tarra-Bulga National Park at Balook in Gippsland’s Strzelecki Ranges.

The creek flows approximately 80 kilometres into an ecologically productive estuary system, which opens periodically into the Bass Strait, adjacent to the Ninety Mile Beach Marine National Park at the busy holiday destination of Seaspray. The creek also provides drinking water for the population of Seaspray.

In the past, much of the creek was overgrown with blackberries and willows. It was prone to erosion, sediment and nutrient run off. Stock entered the creek which damaged habitat for wildlife and polluted water quality. The farmland around the creek is used for dairy farming and sheep and beef production.

The Merriman Creek Landcare Group evolved from the Stradbroke-Woodside Farm Trees Group which formed in 1985. At that time there was a strong impetus to plant trees for shade and shelter and as a resource for fence posts and firewood as the native vegetation in the area had been heavily cleared.

The group’s members have become a driving force in improving the landscape in the area. All of the group members are farmers and they manage an area extending from west of Stradbroke to Seaspray and surrounds.

Nicki Jennings, the inaugural secretary-treasurer, remembers the early days of the group and says it has evolved greatly from its initial form.

“One of our first activities was completing a whole-farm plan using black and white photos of our properties and overlays. We had several meetings at Eddie and Pat Brand’s house with yummy suppers. Other memories include planting trees at the Stradbroke Hall, and Fergus Irving getting into large-scale direct seeding of wind breaks.”

Since then farmers along the creek have worked to fence the creek from stock, carried out revegetation with indigenous species, eradicated blackberries and willow trees and reduced sediment and nutrient run off.

In 2014, nearly a quarter of the creek was sprayed for blackberries with support from the Victorian Government’s Communities for Nature program. The Wellington Shire also complemented this program by spraying another 30 kilometres of roadside blackberries adjacent to the creek.

Group leader, Melissa Ainsworth, says the group has achieved a great deal through large-scale grants and the hard work of landholders.

“We have protected a lot of the creek by fencing it off from stock and carrying out revegetation and weed control projects. Landcarers have also undertaken substantial works off-creek including creating wildlife corridors, protecting remnant vegetation and improving their soil health and pastures. Improving farming practices has also been important with a focus on perennial pastures and soil carbon.

It’s also important to recognise that a lot of Landcare work happens when members do projects on their own properties without any funding,” Melissa said.

As the Merriman Creek is the water supply for Seaspray the group has engaged with the Seaspray community to explain the links between what happens further up the catchment and its impact on the quality of water they use. Seaspray Primary School has also been involved in a planting along Merriman Creek with the group.

Melissa Ainsworth believes the group’s social side has been the secret to its success and longevity.

“The small, rural community of Stradbroke has a hall and a CFA shed. The Landcare group is an important form of social glue. But things will change in the future. The daughters and sons of many farmers have left the area and aren’t returning. We need to think about succession plans for our ageing farmers.”

The group is hosting a celebration dinner and bus tour of past and current projects in September 2016 to commemorate its 30 years of Landcare.

Read next article: The satisfaction of working together