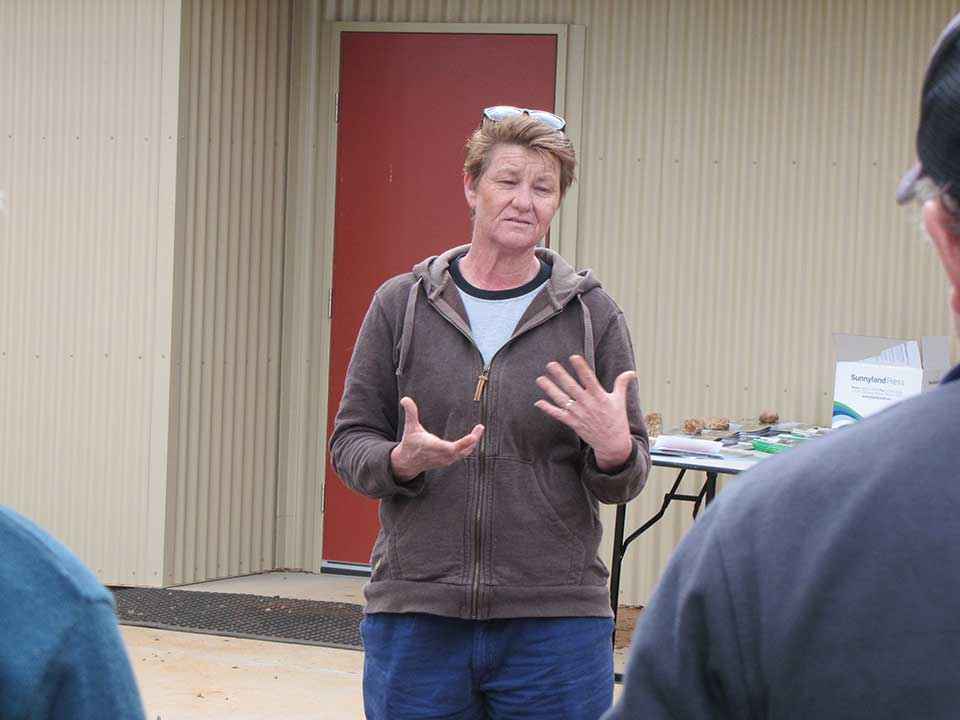 Above Sandii Lewis will use her fellowship to undertake training in Natural Sequence Farming.

Sandii Lewis works with the five Landcare groups in the Eastern Mallee Landcare Consortium. The groups she supports cover an area of approximately 500,000 hectares.

Sandii’s first task when she took on the Landcare Facilitator role in 2014 was to find the areas where she could best help her Landcare groups. Sandii identified governance as a major issue so she developed a series of instructions and policies for each group and assisted them with implementation.

Sandii’s highly developed skills as a Landcare facilitator helped her to identify individuals in each group and to assist them with the task of group rejuvenation by building their skills in grant writing, reporting and project management. This has led to all of the groups performing better and becoming more stable and confident when looking to the future.

Landcare in the Mallee has been challenged by an ageing population, declining volunteer numbers and farmers leaving the land, making it harder for groups to maintain enthusiasm and momentum. Investors are also asking more of grant recipients when it comes to reporting and data collection, which has caused a further decline in membership as groups struggle with the increased level of administration and new compliance requirements.

Sandii has tackled these issues head on. She has changed the thinking around reporting and established standardised processes to streamline data collection.

“To my mind Landcare group members are mainly ‘doers’. When they understand why they are being asked to do something and how to do it, they get on and get it done. Getting people working together rather than in isolation has also been really invigorating for groups,” Sandii said.

Sandii has a proactive approach to environmental issues. She has assisted the Kooloonong-Natya Landcare Group with a project to tackle the invasive Hudson pear cacti, arranged for a recycling facility to collect used grain bags from farmers and ensured her groups are more successful when making grant applications by streamlining administration and compliance requirements.

Sandii is also the current president of Sustainable Living in the Mallee, a voluntary natural resource management group that works closely with local schools to facilitate studies in sustainability and environmental awareness, as well as engaging the urban community in sustainable living methods.

Sandii will use her fellowship to undertake training in Natural Sequence Farming (NSF). Climate change predictions for the Mallee are for warmer temperatures and less rainfall but increased risks of flooding, erosion and waterlogging.

Sandii believes that bringing the NSF model of managing water flows to the Mallee will provide farmers with a valuable tool for sustainable farm and environmental management.

“Sandii is a great candidate. Her enthusiasm and approach would have delighted my mother.”

Landcare group members are mainly ‘doers’. When they understand why they are being asked to do something and how to do it, they get on and get it done. Getting people working together rather than in isolation has also been really invigorating for groups.