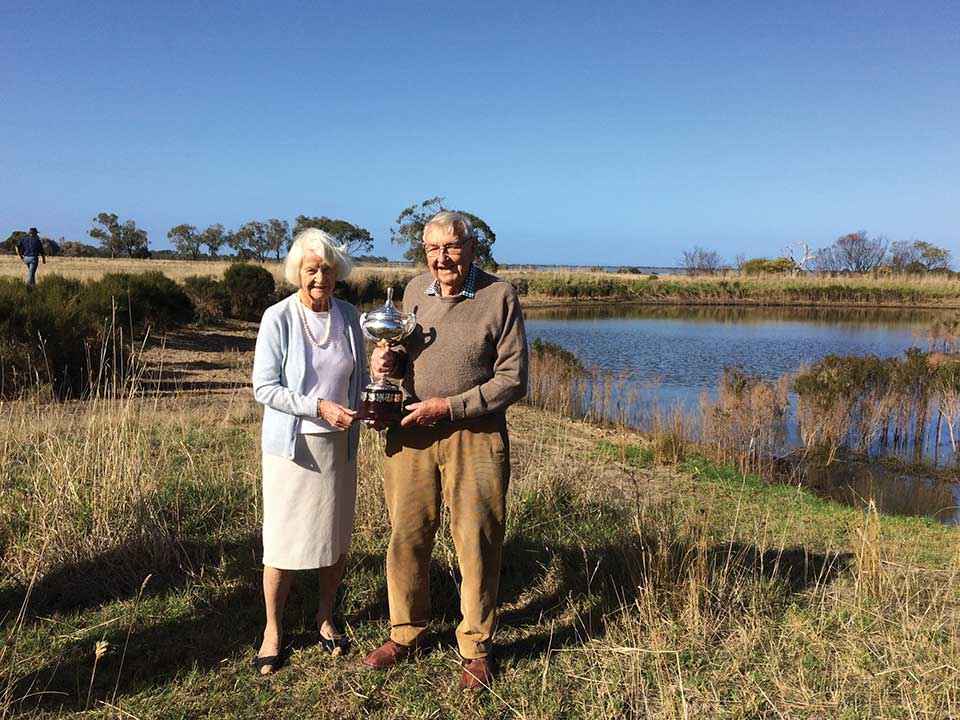 Above Helen and Geoff Henderson stand in front of the dam, holding the Hanslow Cup again in 2018.

By Carrie Tiffany and John Fyfe

“Mr Henderson is awarded first prize in this competition because of his efforts in controlling severe erosion problems whilst at the same time maintaining a highly productive farm unit.” Mr G. B. Ebbs, Soil Conservation Authority, 1968.

On a warm sunny day in early May this year Geoff and Helen Henderson met at their former property Inverness, at St Leonards, with present owners Peter and Patricia Millar. Joining them were neighbours, staff and volunteers from the Bellarine Catchment Network. The day was an opportunity to reunite the Hendersons with an important artefact from their past – the Hanslow Cup for Soil Conservation.

Geoff (now 89) and Helen were awarded the cup for their outstanding efforts in controlling soil erosion in the Otway District soil conservation competition 50 years previously – back in 1968.

Standing in front of one of the smaller dams he created to control extensive runoff and erosion, Geoff remembered the pride they felt receiving the award.

“The Soil Conservation Authority produced a booklet about what we’d done, and there was a field day. We didn’t get to keep the cup, but our names were engraved on a small plaque on the side of the cup – and it’s good to see that it’s still there after all of this time,” Geoff said.

“We also received a medal for our keeping: the Harold Hanslow Medal for soil conservation.”

Geoff purchased the property in 1951 when the property was in extremely poor condition, full of rabbits and with severe erosion problems. At this time Geoff was still working at the family farm at Bellarine.

Geoff and Helen married in 1954 and built their home, Inverness in 1957. The property had numerous eroded gullies. Each one ran half the width of the property and in places were up to four metres deep and 30 metres wide. The heads of the gullies were moving at up to 50 metres a year and carrying the eroded soil into Swan Bay.

Geoff worked alongside experts from the Soil Conservation Authority to develop ways of controlling runoff water that fed into the property from an 1820-hectare catchment area. Geoff built four small dams at the head of the gullies and one very large dam, utilising the eroded gullies as water storage

The overflow from the large dam was designed to be carried along a grassed waterway and trainer bank that discharged down a grassed chute back to the gully floor below the dam wall. Geoff built the chute by mixing 160 bags of cement. It took 10 days of backbreaking work.

“The chute worked well for a while, but eventually developed cracks. Some years later I worked with the Soil Conservation Authority again to build a fibreglass chute. We built it in the Bacchus Marsh workshop in six different parts and brought it out to the property to install,” Geoff said.

The big dam brought income to the farm for many years. Geoff and Helen purchased second hand irrigation equipment and grew new potatoes that were sold at the Victoria Market.

Over the years Geoff improved the pastures on the property, leased more land and grazed sheep and produced fat lambs. During this time Helen developed an extensive garden around Inverness, including a wide collection of roses.

Geoff’s knowledge of soil erosion was widely sought after in the district and he went on to participate in the Otway and Moorabool District Advisory Committees of the Soil Conservation Authority in the 1970s and early 1980s.

“It was great to travel around and talk to other farmers, see what they were doing and offer some advice. Some of the areas were quite salted up by then and we saw some really top-notch work being done to control it,” Geoff said.

Geoff said a lot of credit was due to the late Joan Kirner, former Premier of Victoria, for her role in establishing Landcare.

“Mrs Kirner was a terrific person – very sensible and down to earth. She really got people talking and sharing their knowledge.”

To this day, the erosion control work done by Geoff and Helen protects the RAMSAR wetlands of Swan Bay.

Geoff and Helen lived on the property for 50 years and raised their two sons, Tim and Andy there.

Geoff said that he missed the farming life, but there came a time when it had to be passed on to younger folk with the energy for it. Helen also misses the beautiful garden that she established.

“I don’t support land being bought and sat on as an investment. Land should be managed and managed well so it can be as productive as possible,” Geoff said.

In his characteristically understated fashion, Geoff said it wasn’t really an even playing field when he won the Hanslow Cup back in 1968.

“You couldn’t have won the cup if you didn’t have very bad soil erosion to start off with – and we certainly had that!”

However, reports from the time and from other farmers in the district demonstrate that Geoff’s ingenuity, hard work and unwavering commitment to repairing the landscape and making it productive were the reasons for his win.

The current owners of Inverness, Peter and Patricia Millar, have also benefited from Geoff and Helen Henderson’s management of the property. Geoff has provided Peter with advice on managing a recent minor erosion issue.

“Geoff has vast knowledge on both erosion and on how running water behaves. He has shown me that the key is to slow the flow down so that the energy is removed from the water. It’s very useful to have someone with that knowledge and who is very willing to share it close at hand,” Peter said.

John Fyfe is a friend and former neighbour of Geoff and Helen Henderson. He is on the Bellarine Catchment Network Committee and has spent many years supporting local community groups.

For further information about Landcare in the Bellarine area go to www.environmentbellarine.org.au

Read next article: Are we soil managers – or just users?


By Carrie Tiffany and John Fyfe