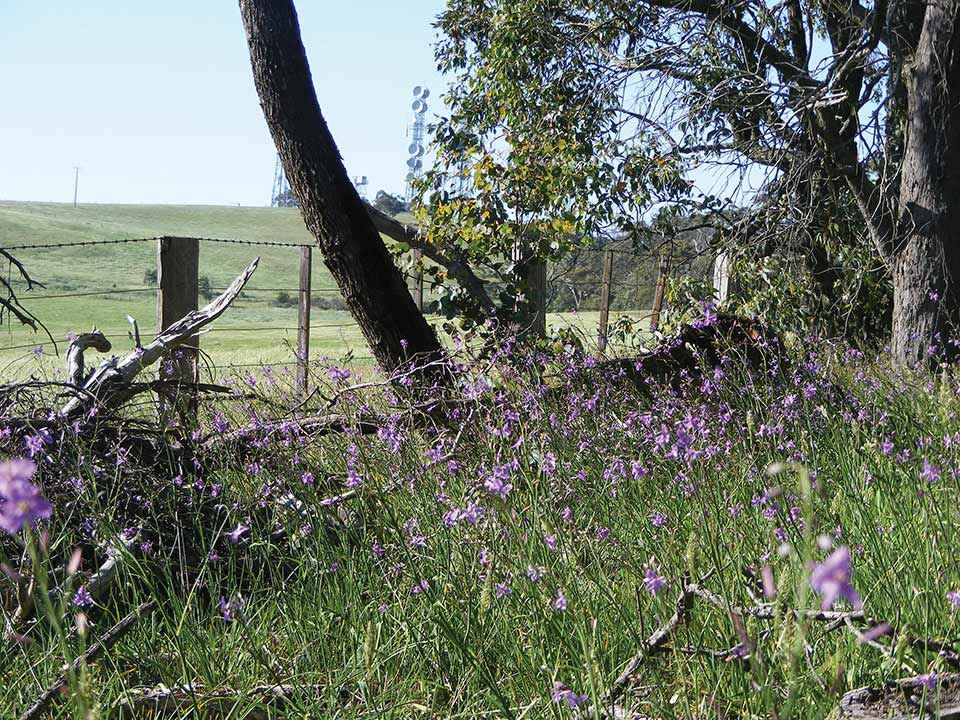 Above Chocolate lilies along a wildflower walk at Poulters Lane, Bylands. The towers on Pretty Sally Hill are in the background.

The Upper Maribyrnong Catchment Group (UMCG) has had a strong focus on protecting areas of significant remnant native vegetation along rural roadsides since its formation in 1988. This has included undertaking weed control projects on roadside reserves with high or medium conservation values, which has required collaboration with local governments as the land manager of local rural roads.

In 1994, Jim Robinson, a UMCG committee member, initiated a project to assess the conservation values of the former Shire of Kilmore’s 300-kilometres of rural roadsides. In conjunction with the shire the group secured an Australian Government Save the Bush (National Landcare Program) grant to undertake the shire’s first survey to assess and map its roadsides for their conservation value.

David Laurie, a local botanist and nurseryman from Reedy Creek, was engaged to coordinate the survey. The then Victorian Roadside Conservation Committee’s Roadside Assessment Manual provided the assessment method.

David Laurie, a local botanist and nurseryman from Reedy Creek, was engaged to coordinate the survey. The then Victorian Roadside Conservation Committee’s Roadside Assessment Manual provided the assessment method. Volunteers from four local Landcare groups did the driving while David used ‘windscreen ecology’ to rank vegetation as low, medium or high conservation value.

David Laurie’s Report on Conservation Values of Roadsides within the Shire of Kilmore (1994) provided a ranking, a brief descriptive summary of each section of roadside assessed and identified weeds, firewood removal and gravel removal as the three main threatening processes for the shire’s roadsides.

Conservation assessments of rural roadsides managed by Mitchell Shire (the former Shire of Kilmore was amalgamated into Mitchell Shire in 1994) have been undertaken over the past 25 years. Some municipalities, including Mitchell and Macedon Ranges Shires, have also installed signs along rural roadsides to identify strips of significant roadside vegetation.

David Laurie’s report identified a 600-metre section of Old Sydney Road, Wallan, as containing the finest section of roadside remnant vegetation observed during the assessment. He rated it as an irreplaceable example of the original vegetation of the area, noting the almost total absence of weeds and intactness of the native ground flora.

“…consideration should be given to gazetting as a flora reserve…Mature trees contain extensive nest hollows. An understorey of wattles and native peas is present. The ground flora is rich in native grasses, forbs, orchids and smaller shrubs. This section is also part of the important wildlife corridor [along Old Sydney Road] between Wallan-Darraweit Road and Stockdale Road,” David Laurie wrote.

A preliminary botanical survey by the UMCG in spring 1995 found more than 50 flora species at the site and subsequent surveys have identified more than 80 flora species, including 16 different orchids. Yam daisy, or murnong in the Woi Wurrung language of the Wurundjeri people, is common. This tuber with a yellow flower (it resembles a dandelion at first glance) was once a plentiful staple food source before it was rapidly eaten out by sheep, cattle and rabbits after colonisation.

The UMCG has organised many spring wildflower walks along Old Sydney Road and other high conservation roadsides to observe the beautiful wildflowers and increase awareness of the relatively intact, diverse and rich remnant local flora along roadsides. UMCG has also produced a colour brochure on the flora of the proposed flora reserve.

The UMCG sought support for the site to be declared a flora reserve, and support came from parties including the Maribyrnong Catchment Committee set up by the Port Phillip Regional Catchment and Land Protection Board (now Port Phillip and Westernport CMA) which included an action in the Maribyrnong Catchment Action Program (1999) on gazetting the flora reserve. The Mitchell Shire Environment Advisory Committee also included an action in the shire’s previous Environment Strategy (2008) that supported the gazettal of the flora reserve.

The site has still not been gazetted. The UMCG needs to redouble its efforts to ensure the 2.66-hectare Old Sydney Road Flora Reserve is finally gazetted.

In 1982 a 5.17-hectare reserve that adjoins Wallan-Darraweit Guim Road was gazetted under a Land Conservation Council recommendation as it provides one of the remaining local examples of bushland that is relatively intact.

The reserve is not pristine. It was grazed by livestock up to 1981, has an erosion gully and a small area of woody weeds. In 1998 the UMCG made a submission to the Place Names Committee to have it named the Beckingsale Bushland Reserve in recognition of local landholder Jim Beckingsale’s instrumental role in its gazettal.

Parks Victoria manages the reserve, which hosts a regular stream of bushwalkers. The UMCG has secured funding for fencing, signposting, an off-road car park and for woody weed and erosion control. The group has also held several wildflower walks and clean-ups at the reserve, organised a botanical survey, installed pamphlet boxes and produced a pamphlet for self-guided walks.

According to Claudia James, a UMCG member who lives along Old Sydney Road, rubbish dumping is increasing.

“Before, people used to hide it and you didn’t notice it so much, but now it’s just blatant. At one Clean Up Australia Day collection we even found a fibre glass swimming pool in the bushes,” Claudia said.

Weeds, including those imported from dumped garden refuse, are another major issue. Since the mid-1990s the UMCG has secured around $50,000 of grants for weed control across 30-40 kilometres of high and medium conservation roadsides.

The main weeds treated were gorse, cape broom, briar rose, hawthorn and other woody weeds. Mitchell Shire has also undertaken weed control along designated sections of the same roadsides targeted by the UMCG for treatment and Macedon Ranges Shire has funded the group to treat weeds along two sections of roadside.

Victoria has more than 120,000 hectares of unused road reserves that support native vegetation. They are often overlooked as biodiversity assets despite containing an important proportion of our remnant vegetation.

DELWP provides licences over unused roads for agricultural uses (such as livestock grazing), for up to 99 years to owners of adjoining private land.

The Victorian Environmental Assessment Council (VEAC) in its Remnant Native Vegetation Investigation (2011) estimated that about half of the total area of Victoria’s unused road reserves have been fully cleared of native vegetation, with a substantial remaining portion in a degraded condition. Despite this, the report found that some unused road reserves contain significant stands of remnant vegetation including an understorey structure with good biodiversity values, as they have been fenced off to exclude grazing by livestock.

The VEAC investigation recommended a comprehensive inventory of road reserves (both used and unused), including site condition and the mapping of significant native vegetation be undertaken. According to VEAC, biodiversity conservation and ecological connectivity should be adopted as management objectives for appropriate unused road reserves.

Many Landcare groups and networks play important roles supporting nature conservation in their areas, including taking action to conserve and protect remnant roadside vegetation. The UMCG continues its work on rural roadsides.

John Robinson is Secretary of the Upper Maribyrnong Catchment Group.