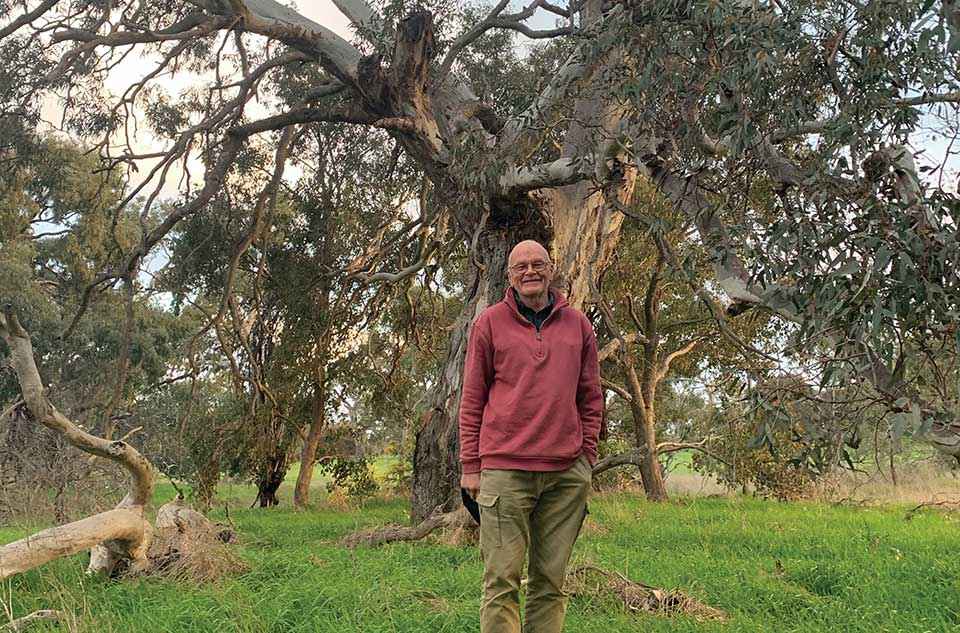 Above Don Rowe enjoying the regenerated landscape on his property ‘Sidlaw’ near Maroona.

This award acknowledges the significant contribution made by an individual who has demonstrated outstanding leadership and commitment to Landcare.

Don Rowe is a landholder and leading Landcarer in the Upper Hopkins region. He has been active in the Upper Hopkins Land Management Group (UHLMG) since it formed in 1991, helping to guide the strategic direction of the group under the banner of mitigating and adapting to climate change.

Well before UHLMG was formed, Don and his wife Goldie were erecting land class fencing and planting biodiversity corridors on their property, transforming the agricultural landscape. Many of the new trees and shrubs were grown from seed Don had collected. He also pioneered the use of direct seeding in the region as a way of sowing large areas with indigenous trees with excellent results.

Don and Goldie have hosted numerous paddock walks, field days and social gatherings for UHLMG on their property. Don is an important mentor and role model for other farmers who share his commitment to soil health and sustainable farming, as well as enhancing indigenous vegetation, protecting wetlands and waterways, and controlling pest plants and animals.

As a teacher at Ararat Secondary College, Don promoted sustainable farming practices and organised students to work on many tree planting projects from Elmhurst to Tatyoon. He believes revegetation is a positive way of improving the future.

“I think every landowner should have a revegetation project that they work on each year. The benefits are well known and with the immediate threat of climate change, it is one thing we can all do. Many of us despair at the lack of leadership in tackling the impending climate crisis but we can all make an effort to improve our small part of the planet,” Don said.

Don has represented the interests of UHLMG members to promote sustainable and practical responses to climate change in the region. He has worked with the Ararat Rural City Council Environmental Sustainability Advisory Group, the Environmental Sustainability Advisory Committee, Glenelg Hopkins CMA Community Advisory Group, the Upper Hopkins Stakeholder Group convened by Ararat Rural City Council, and Ararat Greenhouse Action Group. His approach
to strategic planning is pragmatic and realistic, recognising that Landcare members are volunteers with many other roles and responsibilities.

The region is facing rural population decline. As farm sizes increase, neighbours get further away from each other, and it can be challenging for people to connect. Don has led the UHLMG in engaging with the community and supporting and encouraging new landholders. Don is a regular contributor to the UHLMG newsletter, reaching more than 400 subscribers, and often pens letters to the editor of the local newspaper on environmental and climate change issues.

Don has worked tirelessly at the Maroona Reserve, adjacent to the Hopkins River, planting trees and controlling weeds with the local primary school.

His positive can-do attitude is an inspiration for all who know him.

Sue Brunskill has been a community leader for more than 30 years. She has worked with her husband Colin to protect 32 hectares of bush on their 50-hectare property at Wooragee, in north-east Victoria. An active member of the Wooragee Landcare Group (WLG), Sue’s knowledge, enthusiasm and optimism has helped farmers, lifestylers, and gardeners understand they can quickly make a difference to biodiversity, erosion, weeds and water quality on their patch.

She represents WLG on the Mid-Ovens Landcare Consortium, has assisted with riparian revegetation on five properties along Reedy Creek, has driven bird surveys, worked with VicRoads and the local council on a new rail trail and developed the Wooragee produce market. Recent projects include an Indigenous fire knowledge for Landcare project, developing a guide to local fungi and driving the silver banksia seed production project. Sue uses diverse events and projects to make Landcare relevant to many people’s lives. She has an outstanding ability to connect people and ideas.