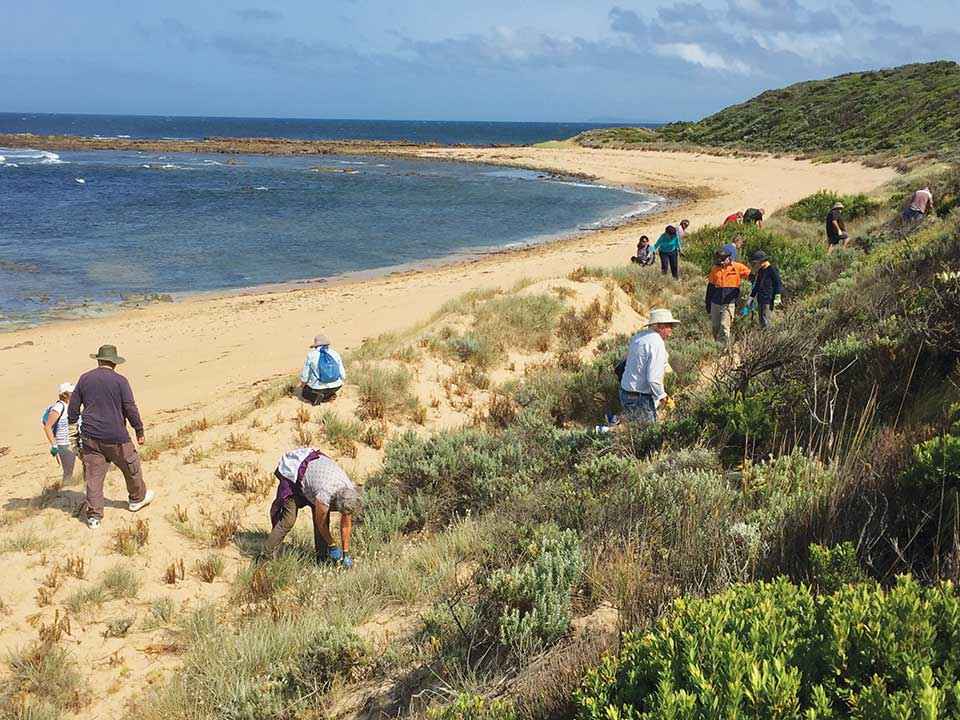 The Coastcare Award acknowledges a community group or network that has contributed to the significant improvement of a coastal or marine environment.

The Cape Paterson Residents and Ratepayers Association (CPRRA) and Harmers Haven Residents and Ratepayers Group: Friends of Harmers Haven (HHRRG—FoHH) have worked together since 2009 to care for coastal foreshore habitat from Coal Point in the west through to the eastern end of Undertow Bay, respecting the culture, rights and aspirations of the Bunurong and Boonwurrung people.

The groups have partnered with South Gippsland Conservation Society, Bass Coast Shire Council, West Gippsland CMA, Parks Victoria, Wonthaggi Seedbank and Nursery, and Coastcare over many decades and have supported local contractors to enhance their own and community volunteers’ expertise in improving environmental outcomes.

According to Amaryll Perlesz, Co-convenor of Friends of Harmers Haven, group members are inspired by the desire to protect rare and threatened flora and fauna species along the spectacular Bass Coast.

“Our activities often have a community education angle. For example, when monitoring hooded plovers, we invite beachgoers to use birding scopes to view the hoodies with their chicks. This encourages beach walkers to be more protective of these birds by leashing their dogs,” Amaryll said.

The groups have been successful with fox and feral cat control through soft-jaw and cage trapping. They have held scores of community weed control and coastal revegetation days, have engaged professional contractors in weed mapping and used drones for aerial weed surveys. They have conducted a beach litter art show, built board walks, bridges and beach access paths to minimise dune erosion, commissioned ecological surveys, regenerated salt marsh habitat, protected a maritime archaeological wreck and hosted the Great Victorian Fish Count down at Wreck Beach.

The groups support the 2018 Bass Coast Shire Council Biolinks Plan, which identified the Wonthaggi Heathlands, Harmers Haven, Cape Paterson and the stretch of coastline east to Inverloch as a priority area of native vegetation that needs protection for landscape-scale biodiversity connectivity.

By working together and independently these two groups are protecting and improving habitat along Victoria’s unique and precious Bass Coast.