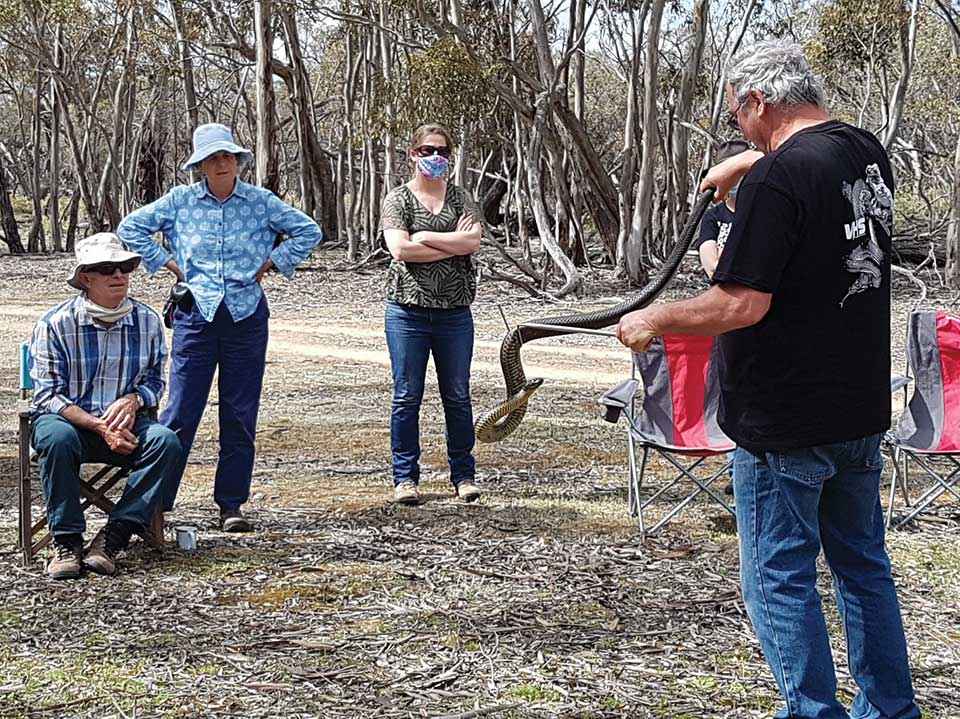 The Joan Kirner Landcare Award is made to an individual who has championed the Landcare movement in Victoria, contributed significantly to Landcare for at least 10 years, and has demonstrated commitment to forging partnerships and effectively engaging the community in Landcare.

Andrew Bradey has worked tirelessly with Kowree Farm Tree Group (KFTG) for more than 30 years to promote the benefits of farm conservation in the west Wimmera. KFTG works to protect and rehabilitate areas of native vegetation on farmland, focusing on the conservation of wetlands, grassy woodlands and creating links between remnant patches of native vegetation on a landscape scale. Andrew has supported research, encouraged beneficial partnerships to bring funding to local projects and advocated for the region to be incorporated into wider conservation plans, including Habitat 141.

When Andrew and Ros Bradey bought their farm in 1984, planting trees was one of the first jobs on the list. The Bradeys have since grown their profitable sheep and cattle business through purchasing more land and incorporating conservation and revegetation as part of farm improvements. Today 20 per cent of their land is managed for conservation.

Revegetation through drought and flood

Andrew’s interest soon expanded beyond the farm boundary. He has led the KFTG in developing impressive revegetation skills, especially in establishing buloke through both drought and flood. He has fostered many successful partnerships for the group with Bank Australia, Trust for Nature, Melbourne University, Landcare Australia Limited, Greening Australia, Wimmera CMA, the South-Eastern Red-tail Black Cockatoo Recovery team and Habitat 141. Many of these partnerships have also involved wide-scale community participation and involvement with local schools.

For seven years Andrew managed Bank Australia Conservation Reserve in western Victoria. He oversaw revegetation work that saw 43 kilograms of seed sown, 70,000 indigenous seedlings planted and contributions from 680 volunteers. The reserve was placed under a covenant with 562 hectares of remnant vegetation protected. Future carbon offsets of more than 87,000 tonnes are predicted within a 100-year time frame from the reserve.

In 2017 Andrew played a key role in engaging schools to grow seedlings for farmers to revegetate private land for south-eastern red-tail black cockatoo recovery. The project resulted in 450 hectares of pine removal, 80 hectares of remnant woodland fenced and 1200 stringybark paddock trees planted and guarded with sheep proof guards that Andrew had developed on his own farm.

Andrew has been actively involved in the establishment of Habitat 141 – an ambitious project to rehabilitate and reconnect degraded landscapes along the 141st degree of longitude. Less than three per cent of open woodland habitats remain in the Habitat 141 region. The clearance, degradation and fragmentation of woodlands have been identified as the primary reasons for the decline of woodland birds in south-eastern Australia. Through his involvement in Habitat 141 Andrew has also worked with urban design students from RMIT to address the cultural and social conditions of towns in decline in the west Wimmera.

The KFTG’s largest project has been the Kowree Biolink, which created a 13 by 70-kilometre conservation corridor between the Little Desert and the Glenelg River. More than 70 farmers worked together to renovate and link wetlands and other patches of remnant vegetation. Much of the revegetation work was completed by using a seed mix and methods trialled and developed by Andrew.

Andrew has held many field days both on his own property, and other KTFG properties to champion the benefits of farm conservation. He is an inspiring speaker and always keen to share his knowledge. His work on a planting guide has helped local farmers to easily establish locally indigenous trees by soil type. Each year he collects seed so that nurseries have access to locally endemic varieties for revegetation.

In their youth, Andrew and Ros spent their university holidays paddling rivers slated to be drowned by dams.

“In the weeks and months it took to negotiate the Mitta Mitta, the Thomson, the Pieman and the Franklin we were awed by the grandeur and wildness of these very special places. And at the same time appalled and saddened to know that they were about to vanish. This formative experience turned us into life-long rusted-on greenies,” Andrew said.

Andrew is also chair of the Environmental Farmers Network. He has shown an outstanding commitment to Landcare in the south-west Wimmera.

Kaye Rodden has been involved in Landcare for 25 years. She is active in her local Barrabool Hills Landcare Group, has been a board member of the Corangamite CMA, Executive Officer of the Otway Agroforestry Network, Secretary of the Victorian Landcare Council, assisted in the formation of Landcare Victoria Inc., and is currently Victoria’s Director on the National Landcare Network. Kaye has been a key contributor to the success of the Victorian Serrated Tussock Working Party and the Victorian Rabbit Action Network. In all of these roles Kaye champions grassroots Landcare and supports the efforts of individuals and groups improving the environment. Kaye and her husband Brent put their beliefs into practice on their sheep and cattle property in the Barrabool Hills with extensive shelter belts, environmental plantings, and protection of its Barwon River frontage. Kaye’s energy, knowledge, persistence, and passion for the Landcare movement have been an inspiration to others.

Kaye and her husband Brent put their beliefs into practice on their sheep and cattle property in the Barrabool Hills with extensive shelter belts, environmental plantings, and protection of its Barwon River frontage. Kaye’s energy, knowledge, persistence, and passion for the Landcare movement have been an inspiration to others.

Christine Brooke is a long-standing and outstanding Landcarer. She was a founding member of the Loddon Vale Landcare Group and has been active in the Sutton Grange Landcare Group for many years. In 2017 Christine joined the committee of Connecting Country for the Mount Alexander Shire region – a community-driven landscape restoration organisation. Christine has also been active in Landcare Victoria Inc., serving on the committee and representing the organisation on the Global Landcare Committee.

Christine is a former board member and Deputy Chair of the North Central CMA and has served as a councillor and mayor of Loddon Shire. She has shown outstanding dedication and has developed exceptional skills in governance, leadership, organisation and communication. Christine has strengthened the voice of Landcare at a local, regional, state, and international level. She is a true Landcare champion.