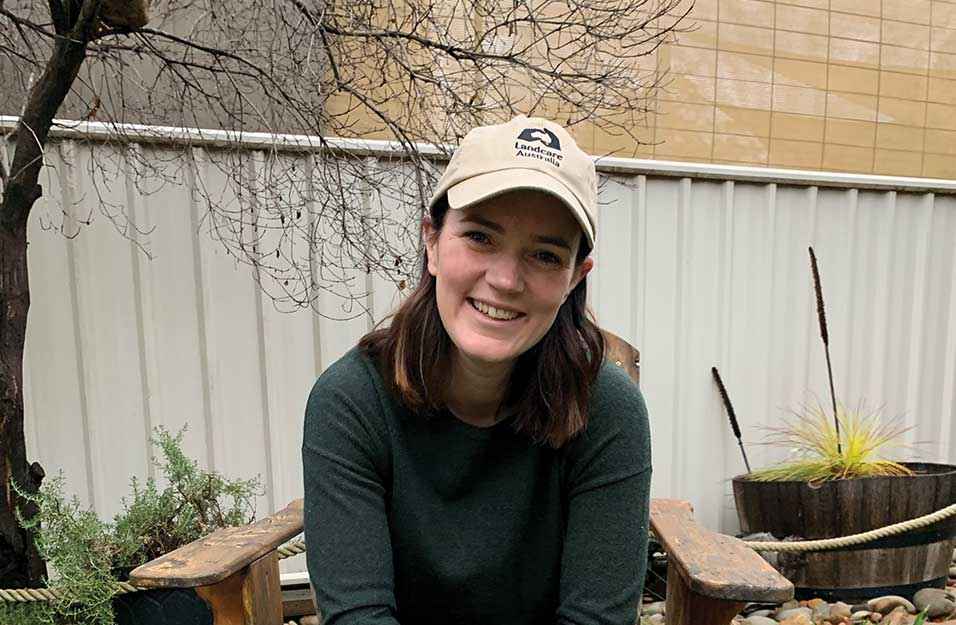 The Steadfast Young Landcare Leadership Award acknowledges an individual or a youth group between the ages of 15–35 years who promote excellence in Landcare through on-ground projects and awareness raising activities.

Tess Grieves grew up in Castlemaine and went to university in Bendigo. Her qualifications and experience in outdoor education and landscape interpretation drew her to Landcare in 2015. Tess is Regional Landcare Coordinator at the North Central CMA – a catchment-wide role that sees her working with more than 160 groups and networks and thousands of landholders and volunteers.

Tess’s focus is always on the bigger picture for Landcare, through advocacy, active partnerships and funding initiatives that provide multiple benefits for environmental volunteers. She revised the North Central CMA’s community grants program and decision-making after undertaking critical analysis of grant allocations and has led the implementation of improved grant management processes across the Victorian Landcare Program.

Tess was instrumental in the formation of the Murray Mallee Landcare Network and the Mount Alexander Shire region Intrepid Landcare Group. Since 2013 Tess has led the annual Chicks in the Sticks rural women’s events to celebrate the achievements of rural women in agriculture and the environment.

Creating partnerships is an area of excellence for Tess. Since 2017, she has created and led a peer-learning program for Landcare facilitators, involving a partnership across four CMA regions. This bi-annual forum encourages peer-support, networks and collaboration which leads to improved natural resource management practices being delivered by Victoria’s Landcare professionals. She sits on the Loddon Mallee Good Neighbour Programs Technical Advisory Group and has undertaken grant assessments for the DELWP’s Community Volunteer Action Grants program and the Victorian Junior Landcare and Biodiversity Grants program.

Tess has a strong interest in Aboriginal cultural heritage and cultural awareness. She has participated in training and development sessions with Aboriginal Victoria and four Traditional Owner groups from the North Central region, and in turn, she has engaged their cultural training staff from these groups to run workshops for the region’s Landcare community and support staff.

Tess’s leadership and partnership approach led to North Central Landcarers being the pilot community for a Rabbit Buster Roadshow to complement, promote and implement the national release of the RHDV1 (K5 strain) of Calicivirus.

Tess sees herself as a storyteller and advocate for Landcare. She co-manages the CMA’s Instagram account and has produced 55 editions of a monthly newsletter (North Central Chat) featuring Landcare projects, faces and stories from across the region.

Tess Grieves is a creative and professional young Landcare leader with an unflagging passion for supporting Landcare volunteers, spreading the Landcare message, and engaging new audiences.

Jackson Cass began his working life in the construction industry. In 2019 he decided to study Conservation and Land Management at Federation University. Jackson joined Garibaldi Landcare Group (GLG) as a volunteer and was soon overseeing revegetation projects.

Not long after graduating in 2020 Jackson took on the role of Landcare Coordinator for Moorabool Catchment Landcare Group and stepped up as treasurer of GLG. Jackson’s enthusiasm and optimism has invigorated both groups.  He is managing revegetation works, aerial spraying of serrated tussock, fauna surveys using wildlife cameras, supporting Wadawurrung Traditional Owners with the management of Bostock Reservoir, rabbit control demonstrations, and advocacy for the Moorabool River.