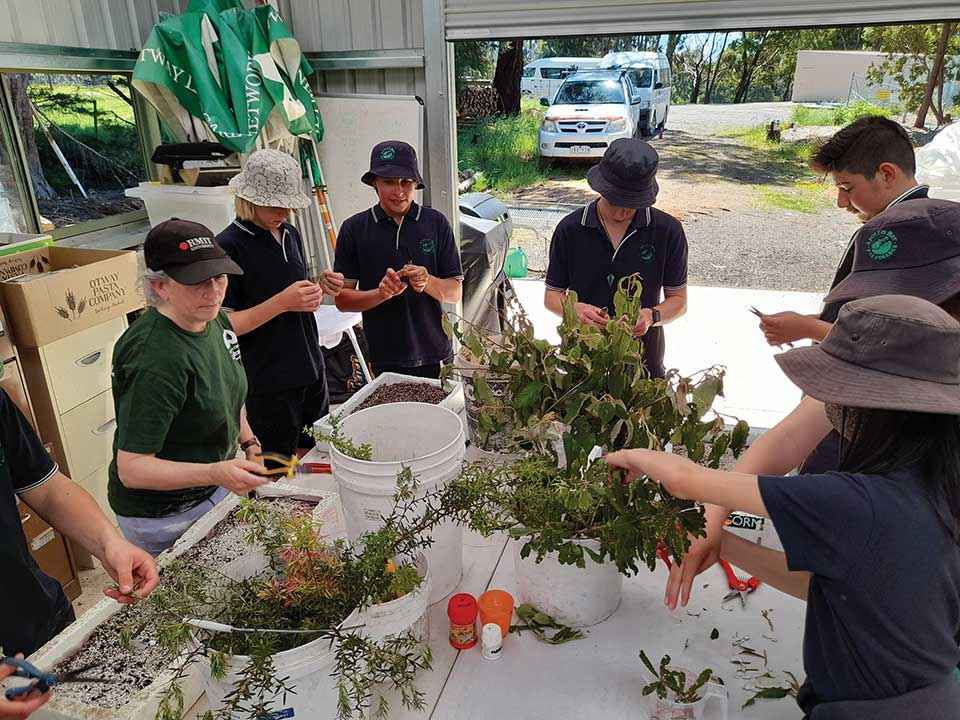 Above Year 7 students from Apollo Bay P-12 College learning how to take cuttings of local native plants at the Shrub Club Community Nursery as part of the college’s Junior Landcare program.

The Southern Otway Landcare Network (SOLN) is a grassroots community organisation dedicated to protecting and restoring our environment so that we can live, work and find joy in a healthy, productive and balanced environment.

Located between the iconic Great Ocean Road and the beautiful cool temperate rainforests of the Otway Ranges, SOLN is an umbrella network for four Landcare groups extending from Wye River in the east to Lavers Hill in the west. We also support the Shrub Club Community Nursery, Otway Ocean Care, Otway Mushroom and Fungi Group, and the Southern Otway Beekeepers.

SOLN has had some recent interest from school groups who run camps in the area and were keen to undertake environmental activities as well as give back to the local community.

On Clean Up Australia Day in March, we worked with two groups of 20 students from Ballarat’s Clarendon College to clean up the Apollo Bay foreshore. The students did a great job and learnt to dodge snakes and seals along the way. Some of the best finds included chairs, cricket balls, a boogie board, and plenty of underwear.

Clarendon College has an annual camp at Yuulong where groups of year 7 students spend eight weeks doing outdoor education and environmental activities. SOLN organised to do a couple of days of environmental weed control with the students.

According to student Neha Reddy, the experience was fun, and she would love to do it again: “We were removing coast capeweed (Arctotheca populifolia) and there are quite a few of them along Johanna Beach. Taking them out of the sand was so satisfying. We would dig up and around the weed with gloves on to find where the root of it was. Once we found it, we would pull it out of the sand, making sure we got each little root and leaf. We carried many garbage bags that we put the weeds in to get rid of them.

“The crew from Landcare and Parks Victoria that showed and helped us around the weeds were very kind and enthusiastic about it and I think they were really appreciative of our work,” Neha said.

SOLN tackled the emerging weed, fishbone fern (Nephrolepis cordifolia), with another group of students. The weed was on the boundary of Parks Victoria land and private property.

The students removed most of the infestation and we were able to have a good discussion with them about the work involved, why it was important, and how they could get involved in the future.

SOLN has also been working with local schools through the Junior Landcare and National Science Week programs doing workshops on seed collection and propagation, weather, burrowing crayfish, insects and fossils. These have all been popular and the only minor difficulty was trying to line up schedules as the schools have busy timetables.

We are looking forward to working with  Clarendon College and other school groups in the future to do more weed control, tree planting, educational workshops and propagating work across the southern Otways and hopefully recruit more young people to Landcare in the future.

Read next article: Introducing young people to the impact of deer