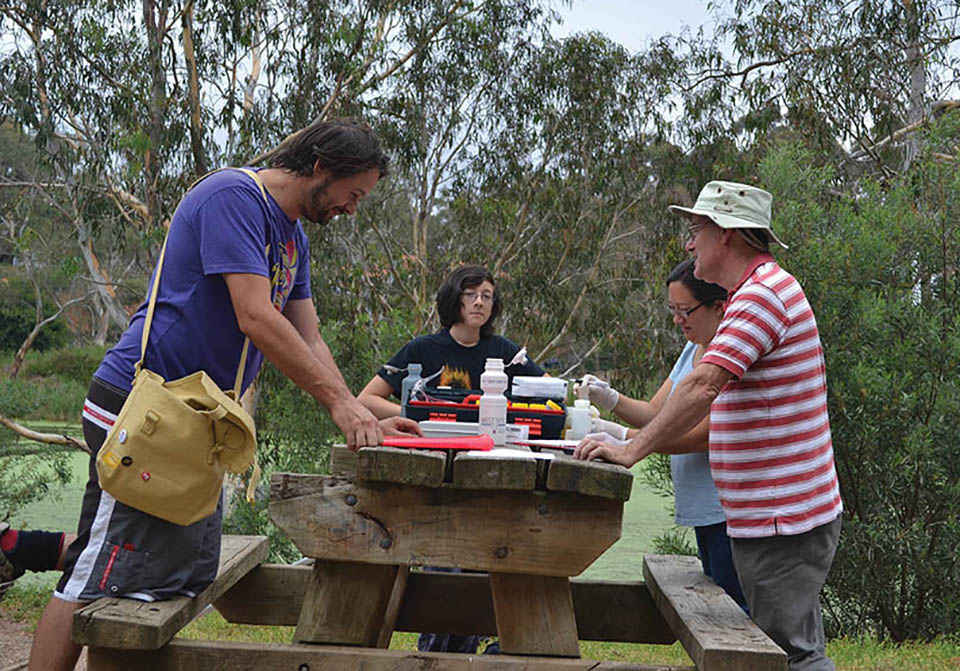 Above A WRivA Waterwatch activity at Bungeys Hole on the Werribee River in 2016.

Lerderderg is based on an Aboriginal word with a possible link to the peppermint gum. Werribee is also an Aboriginal name meaning backbone or spine – which is a good description of how the river has carved its valley across the landscape.

The Werribee River Association (WRivA) was formed in 1981. Its purpose is to protect water quality in the Werribee River and other local waterways and wetlands flowing to the coast and Port Phillip Bay, promote the re-establishment of natural habitat for wildlife in the catchment, and provide recreational and educational opportunities for the local population.

WRivA is affiliated with Waterkeeper Alliance (WKA), an international organisation that started in New York in 1966 when commercial and recreational fishermen formed the Hudson River Fishermen’s Association to save their river from industrial pollution. The fishermen recognised that citizen-led advocacy was the only way to ensure that laws were enforced and their river, livelihood, and the health of their families were protected.

As a result of its successful work the WKA has spawned over 300 Waterkeepers across the world protecting rivers, bays, coasts, creeks and other waterways.

I was appointed as the Werribee Riverkeeper in 2013 after being a member of WRivA since 1993.

My role as the Werribee Riverkeeper is to champion the river. This means speaking up for the river itself using action, advocacy and education to raise people’s awareness about the needs of the river. Riverkeepers and Waterkeepers are also responsible for conducting research into the waterway and the factors that improve it or threaten it.

In 2014 I attended the WKA River Rally Conference in Pittsburgh Pennsylvania USA and heard Robert F. Kennedy Jr., President of the WKA Board speak.

“This is an apocalyptically important battle we are engaged in … Our rivers should be our places of wilderness … as stewards we can act as trustees for our future generations,” Kennedy said.

There are four active Australian Waterkeepers. The Port Phillip Baykeeper and the Upper Hunter, Werribee and the Yarra Riverkeepers. We work together to investigate how waterway protectors can be most effective in the Australian context.

My role as the Werribee Riverkeeper is to champion the river. This means speaking up for the river itself using action, advocacy and education to raise people’s awareness about the needs of the river.

The Werribee River and the community

WRivA works in a wide range of ways and with many organisations to protect its waterway.

Over the last 35 years WRivA has facilitated 70 clean-up activities, 45 revegetation projects, 10 school conferences, 50 school lessons and 50 walks and talks associated with the Werribee River. We have also contributed to more than 20 plans, strategies, and policies.

My day-to-day work as a Riverkeeper is busy and varied. It could involve assisting with LitterWatch – a combined local group activity to raise awareness of the increasingly negative effects of litter – visiting schools for environmental education sessions, contributing to reports, and answering queries about the river.

Annual clean-up days are a major focus. A monthly activity called Beach Patrol 3030 sees volunteer walkers and kayakers alternating each month between cleaning up the Werribee River and Port Phillip Bay beaches. From July 2015 through to October 2016 the community patrol collected 2795 kilograms of rubbish including 4603 bottles and cans. Each of the clean-up days finish with a visit to a local café.

In 2016, WRivA welcomed Melbourne Water as a partner in our programs. We are working together on monthly Waterwatch water quality testing, drought refuge monitoring, DNA sampling for platypus, revegetation projects, workshopping the value of waterways, a Healthy Waterways Strategy, and encouraging young people to become future environmental leaders.

Being a Riverkeeper is very satisfying. It gives a collective voice to a particular community’s concerns about their waterway. There are many Australian rivers, creeks, bays, coastlines and waterways that could do with a Waterkeeper, to ensure that the waterway reflects the values the community desires.

For further information or to get involved with WRivA contact John Forrester at werribeeriver@gmail.com

Read next article: Blogging for nature