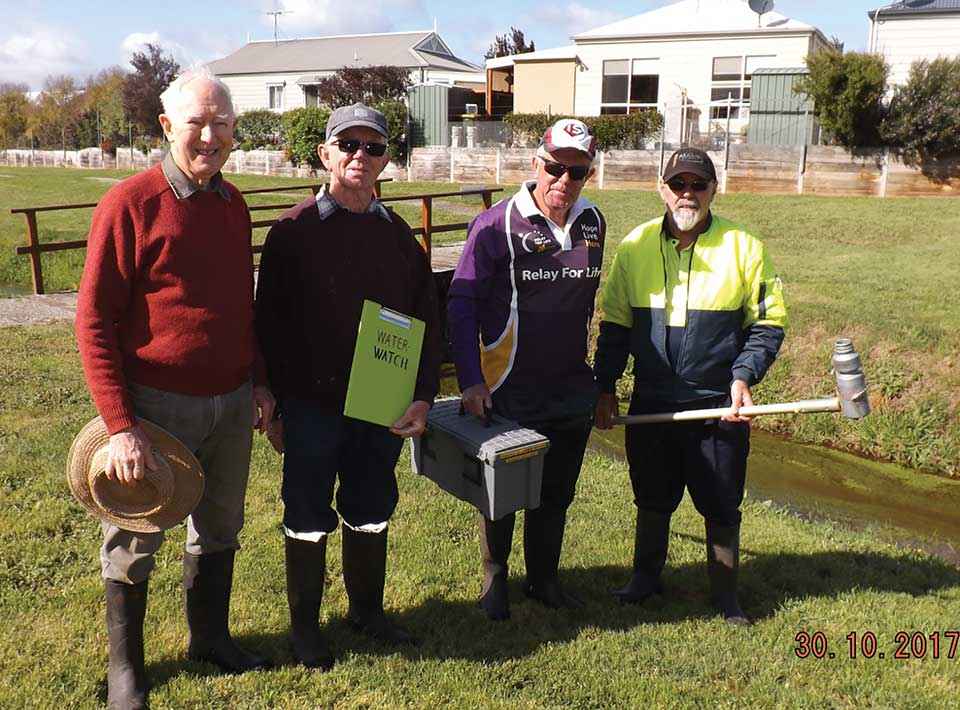 Friends of Land and Water Landcare Group (FLW) was established by residents of the Lifestyle Village in Warragul. Our members’ ages range from 65 to 86 years.

The group formed in 2010 when VicRoads arranged for a contractor to cut a firebreak along the northern edge of the village that borders the M1 freeway. The contractor cut a five-metre firebreak along a 300-metre stretch of land, destroying a healthy shelterbelt of native trees and plants and damaging wildlife habitat.

Instead of lamenting the mess or living with the damage, some of the residents set about getting VicRoads permission to clean it up. After six months of negotiation we were given approval, on certain conditions. One stipulation was that the working group had to be overseen by the local Landcare network, so in July 2010 we were set up as a Landcare group under the Latrobe Catchment Landcare Network.

By May the following year the land had been cleared of rubbish including old tyres, concrete blocks, metre-high thistles and dead trees. Then we got underway with planting out 700 native trees and bushes suited to the site. It was challenging work, but the contrast between before and after kept the team enthused and going hard.

Since 2011 there has been considerable growth, which includes grass that needs to be cut regularly. Now the land component of our work is largely made up of maintenance and the control of fallen trees and branches, as well as some smaller decorative plantings. Many people from inside and outside the village now enjoy walking in this pleasant park-like area.

"We help keep a section of Spring Creek free of the parrot’s feather, a semi-submerged aquatic weed that is a widespread and serious local problem."

The group is also committed to caring for the waterway that meanders through the village. Spring Creek collects water from west and south of the village, taking it via ornamental ponds into Hazel Creek outside the village and on to the Moe River.

We help keep a section of Spring Creek free of the parrot’s feather, a semi-submerged aquatic weed that is a widespread and serious local problem.
We also undertake regular testing of water quality through Waterwatch Victoria. Our members take a fortnightly measurement of air and water temperatures, pH, electrical conductivity, reactive phosphorus, and turbidity.

We enter the data under the supervision of our local Waterwatch coordinator. It’s satisfying to know that our contribution of data adds to the available knowledge to be drawn on by any scientists in Australia and elsewhere.

We have also participated in waterway revegetation activities in other nearby areas.

The group’s most dramatic encounter occurred in 2011 when we were completing our major planting. With around 20-30 metres of corridor still to plant, one of our workers put his shovel into the ground and uncovered an enormous worm.

Fortunately, one of our members had recently attended a seminar given by Dr Beverley van Praagh, a world-authority on the giant Gippsland earthworm (Megascolides australis). Our 1.3 metre specimen was intact so we quickly returned it to the earth. We reported the finding to our coordinator and Dr van Praagh, who were both keen to see pictures.

The next morning we donned sterile inspection gloves and gently uncovered the site where the worm had been found. It was still there, and we were able to complete a gentle re-extraction and photography session. Human handling easily damages the worms so we were pleased when it disappeared back underground. We hope it may still be living in the area and is benefiting from the improved habitat and soil condition created by our revegetation efforts.

"The group’s most dramatic encounter occurred in 2011 when we were completing our major planting. With around 20-30 metres of corridor still to plant, one of our workers put his shovel into the ground and uncovered an enormous worm."

FLW is doing small-scale Landcare rather than the grand and sweeping projects that some groups carry out with such inspirational outcomes. Our members are older, so we do what we can manage. We tend our plants, tidy the two walking paths and the shelterbelt, and help to keep our small waterway clean and attractive.

The managers of the Lifestyle Village Warragul strongly support our Landcare and Waterwatch work because the homeowners take such pleasure in its results. That support extends right up to the managing director of the sizeable company that owns this and a dozen other villages.

FLW is an environmental project with social and health benefits for our members. We believe our group could be a good model for other people in our circumstances who are keen to get involved in Landcare.